President Donald Trump doesn't seem to understand why Denmark won't just sell him Greenland. Come on, he even promised not to build a big, gold Trump Tower on some remote village shore there!

After making an initial offer on the Danish territory last week—one leaders in Denmark promptly rejected—Trump hasn't let go of his absolutely insane crusade to start buying up another country's land. "Strategically it's interesting and we'd be interested but we'll talk to them a little bit," the president told reporters Sunday.

On Monday, he tweeted this:

I promise not to do this to Greenland! pic.twitter.com/03DdyVU6HA

Meanwhile, Eric Trump shared the same photo with quite a different sentiment: 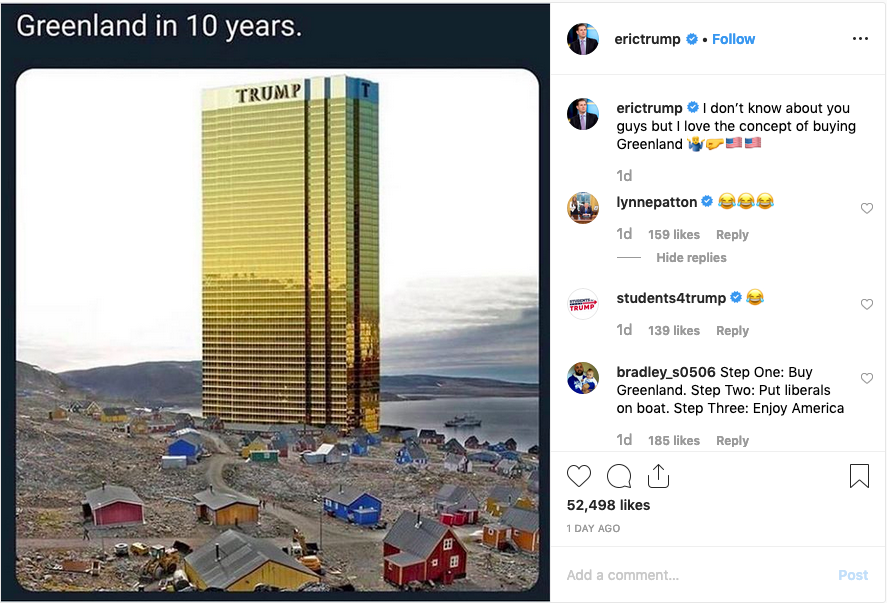 Trump was supposed to visit Denmark in September, with other world leaders, but announced yesterday via Twitter that he was calling off the trip.

"Trump's announcement suggests that, despite his denials, the central purpose of his trip had been discussion of a U.S. purchase of the massive, glaciered island, which holds increasing value as melting sea ice opens new parts of the Arctic to shipping and resource extraction," states The Washington Post.

The prime minister of Denmark, Mette Frederiksen, has called Trump's offer "absurd" and said "I strongly hope that this is not meant seriously."

Greenland's Foreign Minister Ane Lone Bagger said "we are open for business, but we're not for sale."

On Tuesday night, Trump tweeted that because Frederiksen said "she would have no interest in discussing the purchase of Greenland, I will be postponing our meeting scheduled in two weeks for another time."

I wonder if other national leaders will preemptively announce that none of their territory is for sale to ward off a possible Trump visit.

Kamala Harris has seen a significant drop in polls recently. In the latest CNN poll of 2020 presidential candidates, Sen. Harris (D–Calif.) is down 12 percent since late June. This is the largest drop of any top candidate.

Warren trailed right behind Sanders with 14 percent, followed by Buttigieg and Harris (both at 5 percent) and Beto O'Rourke (3 percent).

Booker, Castro, and Gabbard all polled at 2 percent.

Facebook yanks "Women for Trump" ad. The social media site said the ad—which featured a photo of women and the caption "The Women for Trump Coalition needs the support of strong women like you!"—was in violation of Facebook policy with regard to gender and advertising. More from The Hill:

Facebook's ad policy prohibits "content that asserts or implies personal attributes," including, among other things, "direct or indirect assertions or implications about a person's … gender identity."

"We've notified the campaign that the ads violate policy. They cannot continue to run unless fixed," a Facebook spokesperson told The Hill in a statement.

Recession forecast not reassuring…The White House has gone from insisting the U.S. economy is not on the verge of a recession to saying that if we do have one, it will be "moderate and short."

A U.S. recession, if one were to hit, would be "moderate and short," acting White House chief of staff Mick Mulvaney told roughly 50 GOP donors at a closed-door luncheon this week https://t.co/E7XM0oy7sU via @nancook

New from me: A Dutch furry redesigned a military vest that keeps you cool to work better with fursuits six years ago. Now soldiers, some of them furries themselves, are buying his product to use in combat training. Semper fur, baby. https://t.co/7Mnw55KgxU

Here is the president suggesting that Jews are disloyal if they don't vote Republican. The notion of provisional belonging--that Jews aren't really American or French or whatever if they don't do xx--is an idea with a hideous history. N.B. Some 75% of American Jews vote Democrat. https://t.co/fTHTtOSPhi

Harris doesn't really care about health policy as policy; instead she appears to view the issue through an exclusively political lens, wanting to be seen as a supporter of Medicare for All and its most popular promises without reckoning with the trade-offs that a real single-payer health care system of the sort proposed by Sen. Bernie Sanders (I–Vt.). Sanders may be in it for the revolution, but Harris is in it for the optics.