Fashion is fun, but it also serves a practical purpose responding to the environments in which we live. When the weather turns cold, we put on heavy clothes that we shed as the temperature rises. We cover our heads when it rains or under the glaring sun but doff the hats when we have ceilings over our heads. And when the society around us transforms into an all-seeing surveillance state, fashion adapts to conceal our identities from prying cameras and their creepy operators.

That all-seeing surveillance state is on the march from Britain through the U.S. and to Hong Kong. Governments and corporations around the world are stepping up the use of surveillance cameras and facial recognition technology to identify protesters, pedestrians, and customers and track their movements. Simultaneously, people at risk if recognized by unfriendly officials, or just uneasy at the prospect of living in a panopticon, are pushing back with inventive means of confusing or blinding cameras. They're assisted in their efforts by innovative technologies and entrepreneurs who see a market among customers who value their privacy.

Among those fans of privacy are many residents of Hong Kong. In their continuing stand against China's authoritarian government, inhabitants of the specially administered city have come up with a range of clever responses to government attempts to suppress protests and identify participants.

"By using umbrellas to shield identifying features from CCTV cameras—and in some cases using lasers, to fully derail image-capturing abilities—they have kept themselves safer from retribution," Liz Wolfe recently noted for Reason. Protesters also wear helmets to protect against less-lethal munitions fired at the crowds, and to further hide their faces from observing cameras. If the protests continue, Hong Kong might become a natural market for products specifically intended to obscure people's features.

Passageways leading into the MTR are jammed. Umbrellas to cover CCTV pic.twitter.com/9vYI63AX1h

"Can't change your face. Once it is tied to your ID, there's no going back," Scott Urban, the developer of Reflectacles, tells me by email. His glasses frames and clip-ons interfere with both algorithm-based traditional facial recognition as well as more sophisticated technologies that map faces with infrared.

Reflectacles' lenses are opaque to infrared, obscuring people's faces, even as the frames reflect both visible and infrared light to blind surveillance cameras. Clip-ons can be fastened over prescription lenses for the benefit of people who need their eyesight corrected. 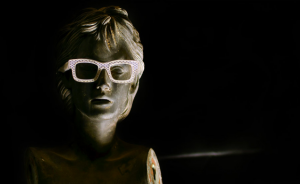 "My concern with facial recognition is not with government, but much more so corporations," says Urban, who eschews social media and loyalty cards and relies on a flip phone for communication. "For some reason people are under the persuasion that when governments use facial recognition, it is a breach of privacy, but at the same time they willingly give up all of their true privacy to corporations."

Fretting over corporations instead of governments is a distinction that might make more sense for Americans than for Hong Kong residents, surrounded as we are by increasingly intrusive technology that observes our every move and that we often purchase ourselves. Conscious of privacy concerns, some local governments, such as in San Francisco, even promise not to use facial recognition technology—at least for now—even as identification technology becomes standard in consumer devices.

Then again, governments and corporations often work hand-in-hand. License plate scanning around the country is a joint public-private operation, with technology and databases maintained by companies including Vigilant Solutions on behalf of police departments and other government agencies. Is that a corporate or government threat? The answer probably depends on who drops the hammer on you—and government hammers tend to be nastier than those in the private sector.

Not that you need to worry about who operates the scanners when you set out to thwart them by donning shirts, dresses, and jackets that are printed with images of license plates.

"The patterns on the goods in this shop are designed to trigger Automated License Plate Readers, injecting junk data in to the systems used by the State and its contractors to monitor and track civilians and their locations," Adversarial Fashion boasts about its products. 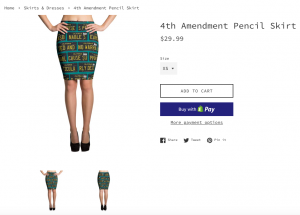 It's an approach that's not intended to protect individual identities, but instead to monkeywrench the surveillance state by jamming the system with crap scans of license plates in bogus locations. The idea is to chew up surveillance resources and render databases unreliable.

For more personal protection, you could just pull a hoody over your face. But that approach might get you in trouble in a Britain that's not-so-slowly converting itself into a real-life version of George Orwell's Airstrip One. Police there are now forcing people to reveal their faces to surveillance cameras—and even fining those who object.

As an alternative, you could hide your real face among a mass of "HyperFace" prints on your clothing that baffle facial recognition software.

"Amid a kinetic assortment of grid-like structures printed on the fabric, black squares suggest tiny eyes, noses and mouths," reports the BBC. "The cameras' facial recognition algorithms are confused. Your identity is secure; your privacy, protected."

To complete the outfit, you might go full Juggalo, wearing the black and white makeup favored by fans of Insane Clown Posse that apparently confuses the hell out of facial recognition technology. Or, maybe you could add a little life to your ensemble with color printouts developed by Belgian scientists that make people essentially invisible to high-tech surveillance. "The researchers showed that the image they designed can hide a whole person from an AI-powered computer-vision system," according to MIT Technology Review.

Are the powers-that-be going to ban vibrant prints and busy patterns that make their software sad?

Honestly, that's a real possibility—at least in some jurisdictions. The surveillance state of the future may well come with a drab dress code. But, for now, all of these garments, accessories, and designs are legal and available to be deployed in the escalating conflict between surveillance-state snoops and privacy advocates.

Fashion has always changed in response to weather, and when it comes to surveillance, it's pouring out with no signs of letting up.