In a tweet this morning, Bernie Sanders, the independent senator from Vermont who is running for the presidential nomination of the Democratic Party, shows that his grasp of economics is about as strong as his grasp of "breaking news." He writes,

For the last 40 years the American working class has been disappearing and the rich have been getting richer.

For the last 40 years the American working class has been disappearing and the rich have been getting richer. 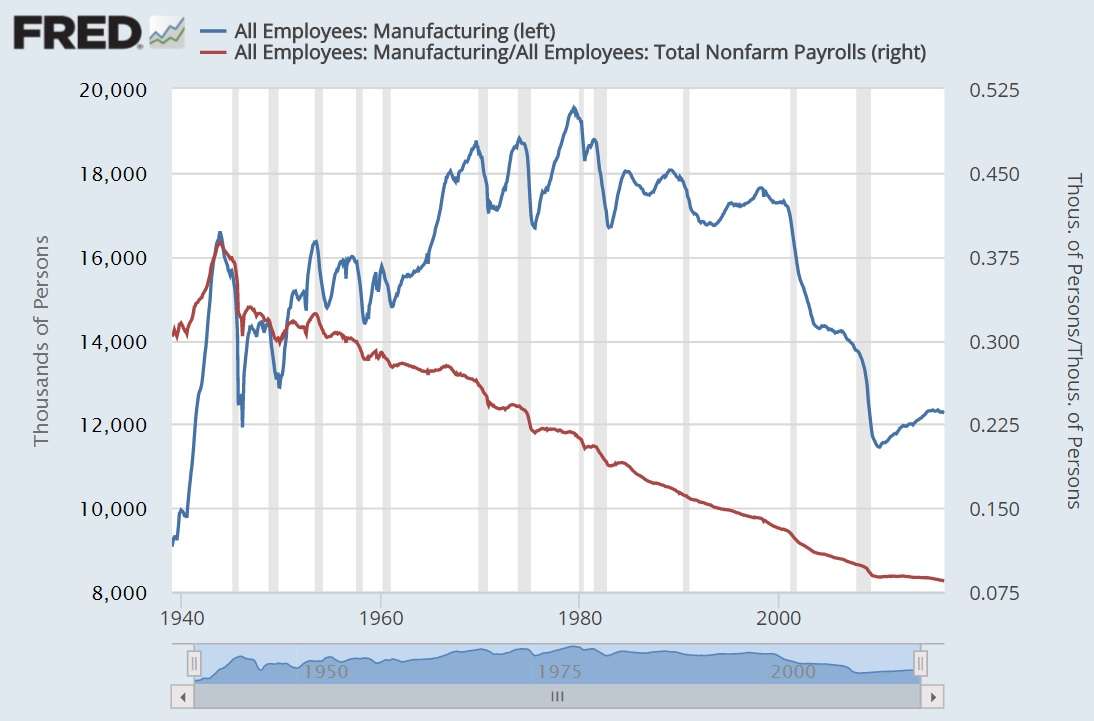 exactly do you figure Bernie is talking about? Working class is sometimes used to denote blue-collar workers, especially factory workers. If we're going that route, it's undeniable that factory jobs have indeed massively declined, but not just over the past 40 years. In fact, industrial jobs as a percentage of the total workforce peaked not in 1979 but in 1943!

Over the past couple of decades—at least since the 1990s, especially as President Bill Clinton was putting finishing touches on the North American Free Trade Agreement that critics wrongly feared would crater the U.S economy—we've spent a lot of time fretting over the end of factory jobs. In 2016, one of Donald Trump's main speaking points was that he was going to keep the factory jobs that remained and then bring back old ones that he mistakenly thought had gone overseas (between 2000 and 2010, according to one representative study, about 85 percent of factory job losses were due to automation, not free trade and off-shoring of jobs). The nostalgia with which factory jobs are treated is one sign that they've been gone for a very long time. Just as with Native Americans, we don't really embrace and romanticize objects of fear and ire until they are truly dispatched. Very few people loved factory jobs when they were a big part of the American economy—instead, you got movies like Modern Times, which portrayed working on an assembly line as torture and degradation. Same with farm work, which was something everyone wanted to escape when everyone had to do it. 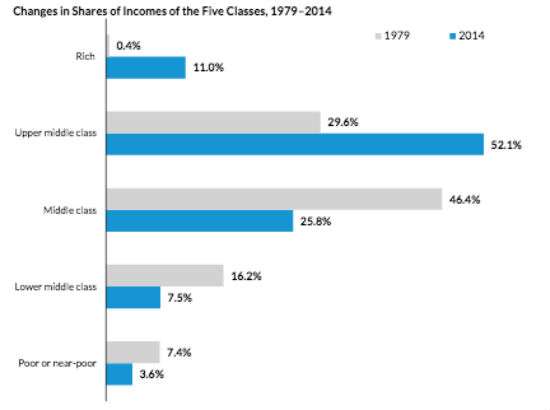 But maybe Bernie is talking about the "middle class" when he breaks the decades-old news that the rich are getting richer. Here, too, he seems off. As Reason's Ronald Bailey has pointed out, between 1979 and 2014, the income distribution in America has gotten markedly better, with more people clustered in its upper reaches. Citing work done by Stephen Rose, an economist at the liberal Urban Institute, Bailey writes:

And as you can see in the chart above, folks in the "upper middle class" jumped from about 30 percent in 1979 to 52 percent in 2014. Yes, the rich do get richer, but when you start looking at individuals rather than statistical averages, an even-more heartening picture emerges for those of us who care about income mobility (I certainly do). Here's economist and Econtalk podcast host Russ Roberts sussing out the important data:

Another study Roberts writes up

Like Donald Trump, Bernie Sanders is a populist whose rhetoric is intended to rile up people who feel like they are being taken to the cleaners by various elites (Trump zeroes in on cultural elites and institutions such as the academy and news media, Sanders focuses on economic elites). Each paints massively misleading pictures of contemporary life in America in an attempt to woo voters his way.

None of this is to say that things are perfect as is, or even tolerable. But on the one hand, you have someone like Donald Trump, whose positive contributions to economic growth—tax reform and deregulation, say—are offset by really stupid policies on trade, immigration, and deficit-spending. On the other hand, you have someone like Bernie Sanders, who may not be a classic socialist that wants the state to own the means of production but does want to grow the size, scope, and spending of government with regard to every aspect of the government. These are not good options and they should not be the only options available to American voters in 2020, or any other year for that matter.