With so many states, cities, candidates, and cultural authorities gung-ho about legalizing weed, it's sometimes easy to forget just how little has changed in terms of prohibition and enforcement for many parts of the country. Arrest numbers from the National Archive of Criminal Justice Data provide a good reality check.

Its data shows that in many jurisdictions, one-fifth of all arrests are still for marijuana possession. In a few areas, policing pot possession accounts for upwards of 40 and 50 percent of all arrests.

The worst offenders in the country:

According to federal data, "marijuana possession led to nearly 6 percent of all arrests in the United States in 2017," writes The Washington Post's Christopher Ingraham, "underscoring the level of policing dedicated to containing behavior that's legal in 10 states and the nation's capital."

But this presents a positively rosy picture compared to local-level arrest data. Just check out this map: 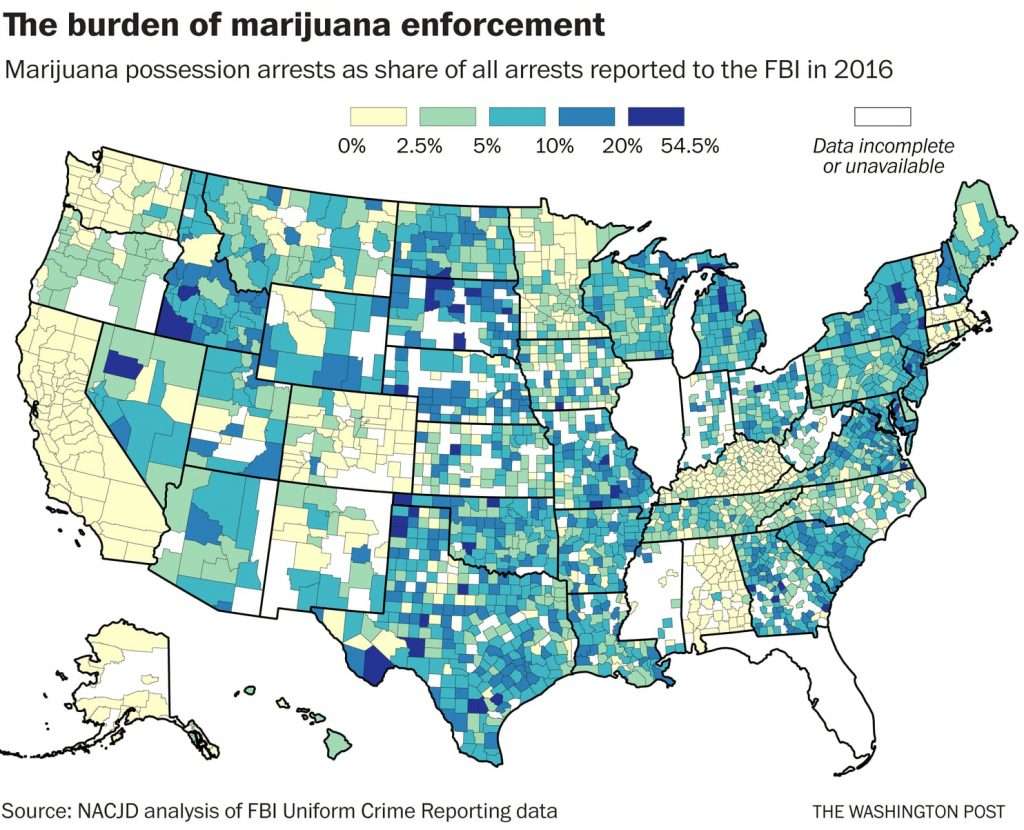 What gives? The still-raging federal drug war, of course.

"The federal government incentivizes aggressive drug enforcement via funding for drug task forces and generous forfeiture rules that allow agencies to keep cash and other valuables they find in the course of a drug bust," notes Ingraham. "And because marijuana is bulky and pungent relative to other drugs, it's often easy for police to root out."

Arrest data doesn't neatly map to liberal/conservative, urban/rural, or any other particular trends. Places like North Dakota, Georgia, and Texas showed high marijuana arrest rates, but so did some East Coast and New England states (New Hampshire, New York, New Jersey) and areas outside Washington, D.C. Meanwhile, "Alabama and Kentucky—which are not known for liberal marijuana policies—also appeared to place a low priority on marijuana possession enforcement," the Post points out.

Pulitzer Prize winners for 2019 were announced yesterday. Poynter has a complete list of winners here. A few highlights:

The #Pulitzer for local reporting was awarded to @theadvocatebr staff for coverage of the state's discriminatory conviction system that allowed courts to jail defendants without a jury's consensus about guilt: https://t.co/NYuA1HQggX

Jailed for being poor is Missouri epidemic: A series of columns from Tony Messenger @tonymess who just won the 2019 #PulitzerPrize for Commentary ! https://t.co/jpVTHzNVNZ via @stltoday

Hannah Dreier of ProPublica won the best feature writing prize for this piece:

Henry was desperate to escape his gang, MS-13. So he told Long Island police and the FBI all he knew. They used his information, then turned him over for deportation. Now, he's being sent back to El Salvador, where he's been marked for death as a snitch. https://t.co/ALySAmT9ld

I went to the Olympic Peninsula to meet a young couple that grows some of the finest weed in Washington state and breeds some of the most prized falcons in the world. https://t.co/SbHPgbUenE

Enter Bill Weld. After running for vice president on the Libertarian Party ticket in 2016, Bill Weld will return to his Republican Party roots to mount a 2020 primary challenge to President Donald Trump

Can you be arrested in D.C. for standing outside your front door?

DC Cir.: You betcha. If a cop says move along, you better move along.https://t.co/0aJSjFY7Wi