Here's a remarkable recording from 1935, just a couple of years into the New Deal era. It's the debut episode of the radio show America's Town Meeting of the Air, and it features four Americans making the case for different social systems. Speaking for fascism: the eccentric Old Right writer Lawrence Dennis. Speaking for socialism: the Socialist Party's perennial presidential candidate, Norman Thomas. Speaking for communism: the leader of the American Workers Party, A.J. Muste. And speaking for capitalism: nobody, because the fourth path represented here is not "capitalism" but "democracy," which is kind of unfair to Norman Thomas, who also supported democratic government. Anyway. Speaking for democracy: Raymond Moley, one of FDR's original Brain Trust.

Each panelist addresses the microphone for about 10 minutes, and then there's a roundtable discussion. Dennis leads off with the case for fascism, which to Dennis means a "planned economy" that still "respects some private property rights" (though those rights should be seen as "mere licenses"); in theory he doesn't reject democracy any more than Moley or Thomas does, but his "new ideal of democracy will be an efficient executive state." Thomas is also high on planning, but he wants to abolish "the profit system" and private ownership of productive property. Muste opens by invoking the founding fathers—not a habit of communists today—and then calls for expropriating "the czars of industry and finance." And Moley makes an anti-utopian case for constitutional democracy, suggesting that the other ideologies onstage are forms of escapism, not serious ways to muddle through our problems. You can listen to the whole thing here. 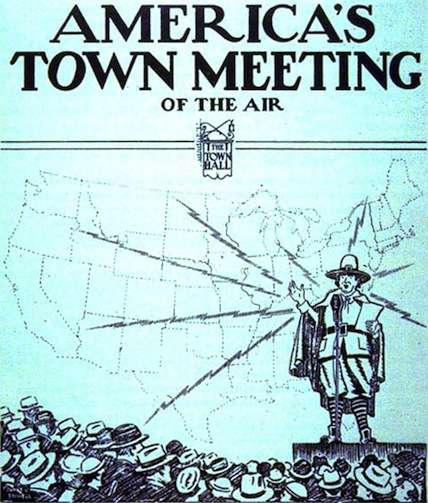 About a year after this program aired, Muste would abandon communism for Christian pacifism. Following World War II, Dennis would move away from fascism, embracing instead a quirky sort of individualism. (In Prophets on the Right, Ronald Radosh quotes the latter-day Dennis calling for a capitalism of "the dissenters, the rebels and nonconformists whose main motivations were not profit or money-making but either religious or intellectual self-expression, freedom and independence.") Moley never abandoned democracy, but he did become a fierce critic of his former boss Franklin Roosevelt, adopting a more free-market view of the world and eventually contributing to the libertarian-leaning magazine The Freeman. Only Norman Thomas refused to budge from his mid-'30s persona, though he did eventually stop running for president.

And in 1964, the hour those four spent talking together would be rebroadcast on the wonderfully weird Seattle station KRAB-FM, which is why the recording has now resurfaced at the KRAB Archive. That site has posted yet more information about the program here, including this intriguing comment from the radio historian David Goodman:

In 1948, on the five hundredth edition of [America's Town Meeting of the Air], the program returned to the question posed on the first broadcast. But this time there was no possibility of having communists or fascists speak for themselves. [The moderator] made it clear in his introduction that communism and fascism were forms of totalitarianism and that "we are not impressed by the propaganda demands of the advocates of totalitarianism to use the principles of democracy to advance the cause of a form of government which would destroy those principles." The speakers chosen to talk about communism and fascism were vigorous opponents of those doctrines.

(For more on the KRAB Archive, go here. For past editions of the Friday A/V Club, go here.)