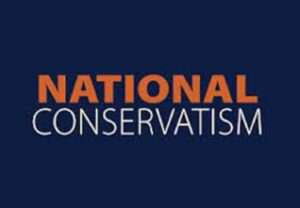 In a much-discussed recent Marginal Revolution post, my George Mason University colleague, economist Tyler Cowen, argues that the main factor that divides "classical liberals" and the the "New Right" is attitudes towards elites. In my view, by contrast, other factors are far more significant – most notably nationalism.

Where Cowen uses the term "classical liberal," I prefer "libertarian" to denote the view that government power must be tightly constrained in both the "economic" and social spheres in order to protect liberty and expand human welfare. "New Right" is an even more fuzzy term than "classical liberal" or "libertarian." But, in this context, I think it refers to the main strands of the Trump-era conservative right, particularly "national conservatism."

common version of the standard classical liberal view stresses the benefits of capitalism, democracy, civil liberties, free trade (with national security exceptions), and a generally cosmopolitan outlook, which in turn brings sympathy for immigration. The role of government is to provide basic public goods, such as national defense, a non-exorbitant safety net, and protection against pandemics.

In the classical liberal view, elites usually fall short of what we would like. They end up captured by some mix of special interest groups and poorly informed voters. There is thus a certain disillusionment with democratic government, while recognizing it is the best of available alternatives and far superior to autocracy for basic civil liberties.

That said, classical liberals do not consider the elites to be totally hopeless. After all, someone has to steer the ship and to this day we do indeed have a ship to steer. Most elites are intelligent and also they are as well-meaning as the rest of us, even if the bureaucratic nature of politics hinders their performance. We can entrust them with supplying basic public goods, and indeed we have little choice…..

In the classical liberal view, the great failing of elites is that they do not keep society as free as it ought to be.

The New Right thinkers are far more skeptical of elites. They are more likely to see elites as evil and pernicious, and sometimes they (implicitly) see these evil elites as competent enough to actually wreck society. The classical liberals see checks and balances as strong enough to limit the worst outcomes, whereas the New Right sees ideological conformity and indeed collusion within the Establishment. Checks and balances are a paper tiger.

Once you start seeing elites as so bad and also so collusive, many other changes in your views might follow. You might become more skeptical about free speech, because you view it as a recipe for putting a lot of power in the hands of (often Democratic-led) major tech companies. And is there de facto free speech if a conservative sociologist cannot get hired at Yale? You also might become more skeptical about immigration, not because you are racist (though of course there are racists), but because you see it as a plot of the Democratic Party to remake America in a new image and with a new set of voters ("you will not replace us!"). Free trade becomes seen as a line peddled by the elite, and that is an elite unconcerned with the social and national security costs of a deindustrialized America. Globalization more generally becomes a failed project of the previous elite.

In the Unpopulist, Robert Tracinski correctly points out that the New Right isn't actually interested in limiting the power of elites. To the contrary, they're happy to grant elites vast discretionary authority, so long as those elites are on the right side of the political spectrum:

To the extent populists have a legitimate complaint against those with power and influence, they have no solution. Their one-sided obsession with the supposed corruption of the elites leads to the toleration of even worse corruption by new, "populist" elites.

Worse, by using these claims as an attack against liberal institutions, the populists are actively insulating their own champions from scrutiny and accountability.

According to the populist, the only way to confront the bogeyman of "the establishment" is to fight fire with fire, abusing government power on the behalf of one's own side in order to counter abuses of power by the elites. This was proclaimed from the stage at a recent conference of nationalist conservatives, where the message, according to American Conservative's Rod Dreher, a fan of Hungarian strongman Viktor Orban, was that "we on the right have got to get comfortable using state power to achieve conservative ends."

This comfort with elite influence is reflected in such elements of New Right thought as their support for very broad executive power (which necessary empowers the president and his elite subordinates), their backing of "industrial policy" (which simultaneously empowers elites in both government and politically influential private industries), and much else.

Of course, many New Rightists do genuinely hate and fear left-wing and centrist political elites. But in that respect, they are little different from adherents of various other ideologies. As Tracinski notes, the political left also has a long history of hostility to rival elites, such as wealthy businessmen and socially conservative religious leaders.

For that matter, I think Cowen understates the extent of libertarian/classical liberal hostility to various  elites. It's true that most libertarians don't regard political elites as "totally hopeless" and believe those elites might have some useful function. But most of us also believe that elite power should be much more tightly constrained than is presently the case, which is one reason why we favor radical reductions in the power of government. In one sense, libertarians are actually more anti-elitist than New Rightists. Instead of seeking to replace one set of overmighty elites with another, we advocate severe restrictions on the power of government, regardless of which elites happen to be in power at the time.

With the possible exception of anarchists, libertarians do not propose to dispense with political elites entirely. But the same is even more true of New Rightists.

If anti-elitism is not the main factor dividing libertarians from the New Right, what is? I would suggest it is the conflict between the cosmopolitanism of the former and the nationalism of the latter. As Cowen notes libertarianism (or classical liberalism) is a cosmopolitan worldview committed to liberty and equal rights for all, regardless of background. That includes a commitment to free trade and free migration, among other things. By contrast, the New Right – especially in its "national conservative" manifestation – are exactly the opposite. They are European-style ethno-nationalists who view foreign cultures and people with suspicion, often descending into xenophobia.

It is no accident that protectionism and severe restrictions on immigration are their signature policies. And Donald Trump's border wall project is perhaps their most symbolically resonant initiative.

In his farewell speech, Ronald Reagan – the iconic representative of the previously dominant form of conservatism – praised immigration and envisioned America as a "shining city" that should be "open to anyone with the will and the heart to get here." It is virtually impossible to imagine any New Right leader saying anything like that. In contrast to Reagan's emphasis on mutually beneficial openness, today's New Rightists hold a largely zero-sum view of the world in which foreign goods, people, and cultures are objects of suspicion and fear.

This cultural insecurity also leads them to be willing to use state power to suppress what they regard as domestic cultural threats, as well. Thus we get speech restrictions such as Florida's "Stop Woke Law" and moral panics over things like "drag queen story hours," which many New Rightists would also like to suppress by force.

In his classic 1960 essay, "Why I am Not a Conservative," F.A. Hayek wrote that "strident nationalism,"  partly rooted in what he called "the conservative distrust of the new and the strange," often "provides the bridge from conservatism to collectivism." This is a prescient description of the New Right (as well as a critique of right-wing nationalists of of Hayek's own day). Their combination of nationalism and fear of cultural change leads them to favor massive use of state power.