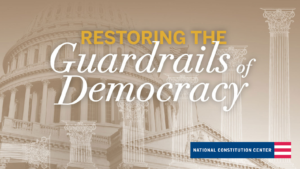 The Team Libertarian Report from the National Constitution Center's "Restoring the Guardrails of Democracy" is now available for free download on SSRN.  I coauthored the report with Clark Neily and Walter Olson (both of the Cato Institute). Here is the abstract:

American democracy faces multiple serious challenges. In the immediate future, we must establish institutional safeguards to prevent the kind of negation of election results attempted by Donald Trump in the aftermath of the 2020 presidential election. In the medium-to-long run, more must be done to empower people to be able to make meaningful choices about the policies they live under. Ballot-box voting has great value. But it is not enough to ensure genuine political freedom. The latter requires enhancements to both "voice" and "exit" rights. We need to simultaneously increase citizens' ability to exercise voice within political institutions, and give them more and better exit options.

This report takes on all three challenges. We propose a variety of reforms that can address immediate short-term threats to democracy, while also increasing citizen empowerment in the long run.

Part I outlines reforms that can safeguard the electoral process against attempts at reversal, while also curbing presidential powers that could be abused in ways that undermine democracy. Among the most urgently needed reforms are new constraints on presidential powers under vaguely worded emergency statutes. These can too easily be manipulated by an unscrupulous administration in ways that could hobble democracy. It is also essential to reform the Electoral Count Act of 1887 in order to definitively preclude the sort of effort to overturn an election that then-President Trump engaged in after his defeat in 2020. In addition, we propose ways to incentivize electoral losers to concede defeat, rather than engage in bogus accusations of fraud and voter suppression, and to gradually restore public trust in the electoral system.

Part II describes how a number of serious flaws in the democratic process can be alleviated by expanding people's opportunities to "vote with their feet." Under conventional ballot-box voting, individual citizens usually have almost no chance of influencing the outcome. They also have strong perverse incentives to be "rationally ignorant" about the issues they vote on, and to process political information in a highly biased way.

Expanded foot voting rights can help alleviate these problems. People can vote with their feet, choosing what jurisdiction to live in within a federal system, and also through making decisions in the private sector. Relative to ballot box voters, foot voters have a much higher chance of making a decisive choice, and therefore much stronger incentives to become well-informed. Expanded foot voting can also help alleviate the dangerous polarization that has gradually poisoned our political system. Much can be done to expand foot voting opportunities in both the public and private sector by breaking down barriers to migration, such as exclusionary zoning. Foot voting can also be facilitated through greater decentralization of political power, which would reduce the incidence of one-size-fits-all federal policies from which there is no exit, short of leaving the country entirely.

Finally, Part III outlines ways in which ordinary citizens can be empowered to exercise greater "voice" in their dealings with the criminal justice system, particularly through reviving the institution of the citizen jury. Since the Founding and before, jury trials have been understood as an important tool of popular participation in government. Sadly, in the modern criminal justice system, the constitutionally prescribed role of juries in resolving criminal charges has been almost entirely displaced by so-called plea bargaining. As a result, citizen-jurors no longer exercise influence over those powers of government that directly impact the lives and liberty of the people more than most others. We propose multiple reforms that can help restore juries to their proper role in the criminal justice system.

Even if adopted in combination, our proposed reforms would not cure all the ills that afflict American democracy. But they can do much to shore it up against threats, and empower Americans to exercise greater control over the government policies they live under.

The NCC project also includes a Team Conservative report (coauthored by team leader Sarah Isgur, David French, and Jonah Goldberg, all affiliated with The Dispatch), and a Team Progressive report (coauthored by prominent election law scholars Edward Foley and Franita Tolson).  I offered some thoughts in the similarities and differences between the three reports here.