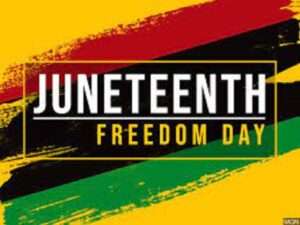 In addition to being Father's Day, today is also Juneteenth. Last year, I wrote a post about the meaning of this newly instituted federal holiday that I think remains relevant. I reprint it with minor modifications below:

Juneteenth commemorates the abolition of slavery in 1865. Some conservatives who opposed its establishment as a national holiday argue it might somehow detract from Independence Day on July 4, or promote left-wing identity politics. For their part, some on the left may view it as a condemnation of America's history of slavery and racism, or even a celebration of black nationalism.

In reality, however, the abolition of slavery was the greatest achievement of the universal principles underlying the American Revolution, and a rebuke to ethnic nationalism and separatism.

Abolition was only achieved thanks to a multiracial movement that emphasized the universality of the right to liberty, and the moral arbitrariness of distinctions based on race.

It is no accident that the antislavery movement was also accompanied by what historian Kate Masur calls "America's First Civil Rights Movement," which sought equal rights for blacks that went beyond simply abolishing slavery.

As Masur and other scholars have documented, both black and white abolitionists routinely cited the universalist principles of the Founding in making the case for abolition and racial equality, even as many of them also criticized the Founders (and later generations of white Americans) for their hypocritical failure to fully live up to their own principles. From early on, critics of the American Revolution denounced the contradiction between its professed ideals and the reality of widespread slavery. "How is it," Samuel Johnson famously wrote, "that we hear the loudest yelps for liberty among the drivers of negroes?"

While the hypocrisy and contradictions were very real, so too is the fact that Revolution and Founding made abolition possible, in part by giving a boost to universalistic Enlightenment liberalism on both sides of the Atlantic. I summarized some of the reasons why here:

Had the Revolution been defeated, Enlightenment liberal ideology would have been dealt a setback in Britain and France, too. That would have set back antislavery movements there, as well. It is no accident that many antislavery leaders in Europe were also sympathizers with the American Revolution.

For all their failings, the Revolution and Founding paved the way for abolition. That happened in large part because they were the first large-scale effort to establish a polity based on universal liberal principles rather than ties of race, ethnicity, or culture.

Those principles are at the root of most of America's achievements, of which the abolition of slavery was perhaps the most important. They are also what enabled America, at its best, to offer freedom and opportunity to people from a wide range of racial and ethnic backgrounds from all over the world.

Abraham Lincoln, who issued the Emancipation Proclamation whose belated enforcement Juneteenth celebrates – put it best in his famous speech on the Declaration of Independence and its implications for slavery:

I think the authors of that notable instrument intended to include all men, but they did not mean to declare all men equal in all respects…. They did not mean to assert the obvious untruth, that all were then actually enjoying that equality, or yet, that they were about to confer it immediately upon them…

They meant simply to declare the right, so that the enforcement of it might follow as fast as circumstances should permit.

They meant to set up a standard maxim for free society which should be familiar to all: constantly looked to, constantly labored for, and even, though never perfectly attained, constantly approximated, and thereby constantly spreading and deepening its influence and augmenting the happiness and value of life to all people, of all colors, every where.

The success of the antislavery movement's appeal to liberal universalism has been a model for later expansions of freedom, as well – including equal rights for women, the Civil Rights Movement of the twentieth century, and the struggle for same-sex marriage. It is a model that advocates of migration rights would do well to emulate today.

The work of fully living up to the ideals of the Founding wasn't completed in Lincoln's time, and it remains seriously incomplete even now. But Juneteenth commemorates perhaps our greatest step in the right direction. And it reminds us that further progress towards liberty and equal rights depends on emphasizing the same principles that made abolition possible.