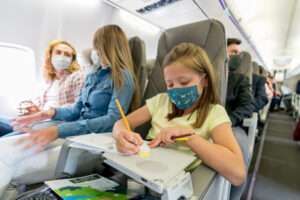 Last Monday's US district court ruling against the legality of the CDC transportation mask mandate has transformed air travel in the United States, allowing passengers and crew to fly maskless for the first time in many months. While many (myself included!) were happy to be free of masks, it is also true Judge Kathryn Kimball Mizelle's opinion has serious flaws. It was widely panned by commentators, including some (myself again included) who are on the political right, oppose the mask mandate policy, or both. Other examples of such critics include Andrew McCarthy of the National Review, and David French and Sarah Isgur of The Dispatch.

I continue to believe that Judge Mizelle got a lot wrong. But it is important to emphasize there are also some flaws in the administration's position. Appellate judges on the US Court of Appeals for the Eleventh Circuit could still eventually rule against the government. If they do so, that might well be a defensible ruling, so long as they avoid endorsing Mizelle's more dubious claims.

It's important to remember that the Eleventh Circuit's job is not to grade the lower-court judge's performance, but to assess the legal case against the mask mandate. If even one of the arguments against the latter holds, they must rule in favor of the plaintiffs challenging the policy—even if they also conclude (correctly!) that Judge Mizelle made many mistakes in her analysis of other issues in the case.

If the administration truly believes the mask mandate is an essential public health measure that saves large numbers of people from death or serious illness, one would expect them to seek a stay! Failure to do so is a sign they may not actually have much faith in the official rationale for the mask mandate policy.

Experts sympathetic to the mask mandate policy conjecture that the decision against seeking a stay indicates the administration does not actually care about perpetuating the mask mandate, but is only appealing to preserve the power of the Centers for Disease Control (CDC) for the future:

Does the Biden administration really want and intend to fight for a higher court reversal of the ruling this week striking down its mask mandate on airplanes, trains and other public transportation — as its high-profile appeal of the case seemed to suggest?

Legal specialists raised another possibility: The administration may instead be buying time and thinking about trying to erase the ruling — a move that would allow it to protect the powers of the Centers for Disease Control and Prevention to respond to a future crisis — but without reviving a mask mandate.

The tell, several outside specialists said, was that the Biden administration was letting days pass without seeking a stay of the ruling, the step that could most immediately resurrect the mask requirement.

"Basically, it is giving up on the mask mandate," said Lawrence O. Gostin, a Georgetown University professor of global health law who advised the White House on the case. "The administration's goal is a legal principle, which is to ensure that the C.D.C. has strong public health powers to fight Covid and to fight future pandemics. And it appears much less important to them to quickly reinstate the mask mandate…"

If the government really wanted to fight its appeal all the way to a decision on whether to overturn Judge Mizelle, said Stephen I. Vladeck, a University of Texas at Austin law professor who specializes in federal courts, "then they totally botched this, because it's Thursday and the ruling was on Monday and they haven't done anything about it yet."

But Mr. Vladeck contended that the failure to seek a stay may make sense if the Biden legal team was instead trying to protect the C.D.C.'s power with no real intention of trying to get a higher court to reinstate the mask mandate.

He pointed to an obscure legal doctrine under which if a case is on appeal when the dispute becomes moot for reasons unrelated to the litigation, an appeals court can remand it to the district court with instructions not only to dismiss the case but to vacate the district court's ruling — meaning wipe it from the books.

The government, he said, may be giving itself that option after the mandate's planned expiration on May 3.

If Gostin and Vladeck are right, CDC public health policy seems increasingly untrustworthy. In previous posts on the mask mandate policy (see here and here), I noted the serious weaknesses in the case for the transportation mask mandate, and linked it to previous instances where CDC policy seems driven by political pressure rather than by "following the science." But more damning than the skepticism of outside critics like myself is this apparent indication that even the Biden administration doesn't really believe the transportation mask mandate is necessary, and therefore isn't actually trying to get it reinstated as soon as possible.

At the very least, this state of affairs weakens arguments that the CDC deserves special judicial deference to its supposedly apolitical expertise on pandemic-related policy. In reality, agency policy seems heavily politicized.

One can defend the administration and the CDC on the grounds that, while the legal and policy case for the mask mandate is strong, conservative appellate judges on the Eleventh Circuit are likely to uphold Judge Mizelle's decision anyway, because of their supposed bias against public health measures.

This overlooks the reality that conservative judges—including those on the Supreme Court—have voted to uphold many Covid-era public-health measures that have stronger legal support. Notable examples include recent Supreme Court decisions upholding the Biden administration vaccination mandates for health care workers and for members of the armed forces.

The implicit prediction that any appellate ruling against the transportation mask mandate would necessarily be a result of incompetence or bias is also wrong because of factors specific to this case.

Recall that Judge Mizelle's ruling against the mask mandate was based on three justifications: 1) that the policy exceeded the agency's powers under 42 U.S.C. Section 264(a), 2) that the CDC violated the Administrative Procedure Act (APA) by failing to go through the notice and comment rule-making process, and 3) the policy was so irrational as to be "arbitrary and capricious."The plaintiffs challenging the mandate need only prevail on one of these three issues to win the case.

I think Judge Mizelle is pretty obviously wrong about the third issue. While the transportation mask-mandate policy is badly flawed, it is not so completely ridiculous as to be "arbitrary and capricious." By contrast, as I noted in my earlier post, there is a very plausible case that the CDC violated the APA. Even if the emergency nature of the situation justified bypassing notice-and-comment processes when the policy was first adopted in early 2021, there is much less excuse for continuing to circumvent normal procedure during the many months that have passed since then. Notice and comment requirements, it should be emphasized, are more than a mere technicality. They allow people affected by regulations to have some voice, and to influence the government to mitigate their burdens.

The issue of the CDC's authority under Section 264(a) is an intermediate case. The plaintiffs' argument here is weaker than on the APA, but not as weak as on the "arbitrary and capricious" standard.

Section 264(a) gives the CDC the following authority:

The government argues that the transportation mask-mandate qualifies as a "sanitation" measure under the terms of the statute. For reasons outlined in my earlier post, Judge Mizelle's definition of "sanitation" as limited to "a positive act to make a thing or place clean" doesn't make much sense. But I also emphasized that the definition of "sanitation" under the statute must be narrow enough to avoid making the other powers listed in Section 264(a) redundant. In addition, it must be narrow enough to avoid giving the CDC the power to restrict virtually any human activity that might potentially spread disease—which the Supreme Court (correctly) ruled is unacceptable for a wide range of reasons in the eviction moratorium case, which interpreted the very same law.

In my view, the most plausible definition of sanitation is likely to be one that avoids these two pitfalls, while also allowing the CDC to adopt a transportation mask mandate. But there could potentially be defensible options that exclude the mask mandate—ones more plausible than Judge Mizelle's weak theory.

Some commentators, including Andrew McCarthy, suggest that the mask mandate may be authorized by the very first sentence of Section 264(a), which gives the CDC the power to "make and enforce such regulations as in his judgment are necessary to prevent the introduction, transmission, or spread of communicable diseases from foreign countries into the States or possessions, or from one State or possession into any other State or possession." If so, the government need not rely on the word "sanitation" in the second sentence.

But if the first sentence is an independent grant of power, it would run afoul of the Supreme Court's ruling in the eviction moratorium case, which held that Section 264(a) cannot be interpreted to give CDC virtually unlimited authority to restrict or shut down nearly any human activity. After all, as I and other critics of the eviction moratorium repeatedly emphasized, almost any form of human interaction risks spreading communicable diseases in some way. Following the Court's reasoning in the eviction moratorium case, we should interpret the second sentence of Section 264(a) as setting out the types of regulations the CDC is allowed to enact in its efforts to pursue the public health objectives laid out in the first sentence.

There are some other issues in the case, which space constraints preclude me from covering here, most notably the question of whether Judge Mizelle was right to order a "nationwide" or "universal" remedy, as opposed to one limited to plaintiffs. But my tentative bottom-line conclusion is that the case against the transportation-mask mandate is stronger than Judge Mizelle's badly flawed opinion makes it seem. On balance, I still think the government has the better-supported legal position. But a ruling against the mandate would be defensible, so long as it avoids the district court's particularly egregious errors.