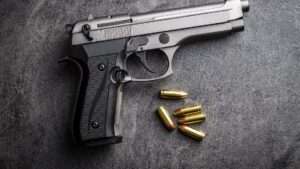 The Duke Center for Firearms Law recently published my new essay on "Guns, Property Rights, and Takings." My piece is part of a symposium on "Privatizing the Gun Debate." Several additional contributions will be posted in the near future.

Here are some excerpts from my essay:

In recent years, some two dozen states have enacted laws requiring private property owners to allow employees, customers, and others to bring in guns or store them on their land and buildings. Variously known as "parking-lot laws" and "gun-at-work" laws, such regulations are a serious violation of property rights. In many cases, they may also qualify as a taking requiring compensation under the Supreme Court's 2021 ruling in Cedar Point Nursery v. Hassid.

I am a supporter of strong Second Amendment rights to keep and bear arms…. But laws forcing unwilling private property owners to accept the presence of guns do nothing to protect the Second Amendment, undermine individual autonomy, and – at least in many cases – are themselves unconstitutional….

[T]hese laws are often cloaked in the rhetoric of the Second Amendment. But, in fact, they do nothing to protect Second Amendment rights. Like most other constitutional rights, the Second Amendment constrains only the government. It does not require private individuals to possess guns or to accept their presence on their land. In that respect, it is similar to other provisions of the Bill of Rights. For example, the First Amendment does not require private owners to allow on their land every kind of speech protected against censorship by the state….

There are multiple good reasons to allow private owners to bar guns from their land, if they so choose. Those reasons dovetail with standard general accounts of the advantages of private property.

Perhaps the most fundamental of these is the link between private property rights and individual autonomy. One of the main advantages of being a property owner is the right to use your land as you see fit, even if other members of the community don't understand your reasons, or even disagree with them. Some people object to the presence of guns on their land for aesthetic or moral reasons (e.g. because they are staunch adherents of a philosophy of nonviolence). Such autonomy deserves respect, even if we disagree….

A closely related rationale for respecting property rights in this context is the danger of imposing a one-size-fits-all rule on a wide range of owners with very different situations and needs. Even owners who do not object to the presence of guns on principle may have good reasons for barring them in some situations….

It is also important to recognize that allowing owners to bar guns enhances not only the liberty of the owners themselves, but also that of customers and clients who, for whatever reason, prefer to patronize gun-free spaces. If a state law requires all private owners (or even only all businesses or employers) to allow the presence of guns, such gun-free options will be eliminated for everyone – owner and customer alike….

Sadly, the imposition of mandatory gun-access laws on property owners is part of a more general turn against private property rights by many conservatives, in recent years. Other examples of the same tendency include widespread right-wing support for the use of eminent domain to build Trump's border wall, advocacy of laws forcing social media firms to host speech they object to, and legislation barring private owners from imposing Covid-19 vaccination requirements as a condition of employment or entry on their land….

The political left, of course, has its own longstanding dubious anti-property tendencies. Among other things, many support "NIMBY" zoning restrictions, and harmful uses of eminent domain….. But that in no way excuses the growing bad behavior of the right….

In addition to unjustly undermining property, many mandatory gun-access laws also violate the Takings Clause of the Fifth Amendment, which requires the government to pay "just compensation" whenever it takes private property rights.

Before last year's ruling in the Cedar Point case, conventional wisdom assumed that, under Supreme Court precedent, only a "permanent physical occupation" of property qualifies as a per se taking automatically requiring compensation under the Takings Clause….

Cedar Point involved a challenge to a California law requiring agricultural growers to give union organizers access to their property for three hours per day, 120 days per year.

In a 6-3 decision…., the Supreme Court struck down the California law, and established the rule that "a physical appropriation is a taking whether it is permanent or temporary." Thus, the California law qualifies as a taking, even though the union organizers were given access to growers' land "only" 360 hours per year….

As Joseph Blocher explains in an insightful September 2021 post at the Duke Center for Firearms blog, the Court's reasoning in Cedar Point readily applies to parking-lot and gun-at-work laws. Here too, the government requires property owners to accept the presence of people (armed gun owners) and objects (guns themselves) the owners would prefer to keep out. In most cases, the presence of the guns and gun owners is only temporary (limited to working hours). But, under Cedar Point, that distinction no longer matters.

Indeed, depending on the hours the business or other regulated enterprise keeps, the amount of unwanted intrusion required by gun-access laws might be considerably greater than that at issue in the Cedar Point case…..

Even if property owners succeed in proving that parking-lot laws are takings, it is not clear how much compensation they would get…..

But even if property owners get only modest compensation, it might still be enough to deter state and local governments from adopting and enforcing parking-lot laws and other similar regulations. Even if liability is small on a per-hour basis, the costs may well mount up, over time, as courts assess liability for many thousands of hours of mandated gun storage and access each year. That is especially likely if the law does not limit the number of guns that must be accommodated.