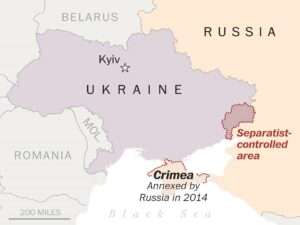 Russian President Vladimir Putin has sent additional troops into areas of eastern Ukraine controlled by pro-Russian separatists, and may well be starting a large-scale invasion of the rest of the country. The conflict between Russia and Ukraine has its share of complexities. But the bottom line is clear: while neither government is a paragon of virtue, Putin's regime is overwhelmingly in the wrong, from the standpoint of both law and justice.

The law is simple. There are few, if any, more fundamental violations of international law than seizing other nations' territory by force for the purpose of annexing it or ruling through a puppet regime. The United Nations Charter specifically forbids "the threat or use of force against the territorial integrity or political independence of any State." That description fits Russia's assault on Ukraine to a T.

The charge of waging wars of aggression was also one of the main accusations brought against the Nazi defendants in the Nuremberg trials; the Nuremberg tribunal ruled that starting a war of aggression is "the supreme international crime." Putin's rationales for seizing Crimea in 2014 and later the Donbass region of Eastern Ukraine are very similar to those Hitler offered for his attacks on Poland and Czechoslovakia: the supposed need to protect co-ethnic populations facing largely trumped-up threats (ethnic German minorities in Poland and the Sudetenland in Hitler's case; Russian-speaking populations in Ukraine in Putin's case).

It's important to recognize that Putin isn't just now breaking this vital international law. He already did it twice. First, when he sent troops to seize Crimea in 2014, and then again when he used his forces to back the occupation of the Donbass region by separatist forces. In the case of the Donbass, Russia claimed—until recently—that their forces were not involved. But this claim was obviously false, as even a Russian judicial ruling admitted in a careless moment. Russian forces have obviously taken part in the fighting that has killed some 14,000 people since 2014. Without Russian backing, the separatist forces would long since have been crushed, and probably would never have seized so much territory to begin with. And, over the last few days, Russia has moved its forces into the Donbass openly.

If Putin now tries to take more of Ukraine, it will just be an expansion of his government's already grossly illegal aggression. The  best historical analogy would be Hitler's shift from taking the Sudetenland (the part of Czechoslovakia with a large German population) in 1938 to occupying all of Czechoslovakia in 1939.

In this case, however, Russia's aggression has had the exact opposite effect. Far from protecting human rights, it has done the reverse: replacing a flawed but relatively liberal government, with a vastly more oppressive authoritarian regime. In Crimea, the first territory seized by Putin's forces, the introduction of Russian rule has led to massive human rights violations, including persecution of dissent, and repression of the Crimean Tatar minority (which has a long history of previous victimization by both czarist and Soviet Russian rulers).

As for the claim that Russia's seizure of Crimea was justified by the referendum held there under the control of Russian forces, that referendum was a blatant travesty compromised by fraud and coercion, as determined by a May 2014 investigation undertaken by the Russian government's own Presidential Council on Civil Society and Human Rights (then still one of the few Russian government agencies with a modicum of independence from the Kremlin). For reasons I described here, even an honest and fair majority vote would not be enough to justify rule by a regime as oppressive as Putin's. But, regardless, there was no such fair vote in Crimea.

The story is much the same in the Donbass. There too, Russian rule has resulted in large-scale repression and human rights violations. And it is worth noting that available survey data suggests that most of the region's people oppose Russian rule, which is one reason why it has only been possible to maintain by force.

Amnesty International—an organization that, too put it mildly, isn't known for favoritism towards the US and its allies—recently summarized the human rights situation in Crimea and the Donbass:

Territories in eastern Ukraine controlled by Russia-backed separatists remained beyond the reach of many civil society and humanitarian actors. Suppression of all forms of dissent persisted, including through arrest, interrogation and torture and other ill-treatment by the de facto authorities, and imprisonment in often inhumane conditions….

A severe crackdown on human rights work and all dissent continued [in Crimea], as did restrictions on the media…..

Amnesty's report also outlines numerous flaws and injustices in areas under Ukrainian rule, as well. Nonetheless, it concludes that "[m]edia remained pluralistic and largely free, although harassment of outlets in connection with their editorial policies, and intimidation and violence against journalists, were regularly reported." That's a sharp contrast with Russian-occupied Ukraine, and indeed with Russia itself.

Unlike Russia, Ukraine also has free elections, and opposition political parties and media operate freely. The opposition prevailed in the 2019 elections, and defeated President Petro Poroshenko accepted the result and ceded power to the winning candidate (current Ukrainian President Volodymyr Zelensky)—a scenario which is almost unimaginable in Putin's Russia. Ukraine's treatment of ethnic and religious minorities, while far from ideal, is also far superior to Russia, with its repression of "foreign" churches. Although homophobia is far from unknown in Ukraine, it has nothing comparable to the Russian government's large-scale persecution of gays and lesbians.

The Ukrainian government is far from ideal. It has its own violations of liberal democratic norms, and the legal system and government bureaucracy suffer from massive corruption (as is true in Russia, as well). But, despite its very real flaws, Ukrainian rule is vastly preferable, on any plausible moral grounds, to Putin's.

In sum, Russian rule in occupied Ukraine has been authoritarian and brutally oppressive. That should not be surprising, since much the same is true in Russia itself. Should Putin's forces occupy more of Ukraine, we can expect similar repressive policies to be instituted in whatever new territories are taken.

Putin's claims that his assaults on Ukraine are justified by the supposed threat posed to Russia by NATO expansion are just as specious as his other rationales for aggression. In reality, there is no real prospect of Ukraine joining NATO, because several key NATO allies have consistently opposed it. More generally, NATO expansion has never been a meaningful threat to Russia, because it was coupled with a major drawdown of US and allied forces in Europe in the post-Cold War era. If  the NATO powers genuinely sought to threaten Russia, they would have been building up their forces in the region, not scaling them back. The only "threat" NATO poses is to Russia's ability to attack its neighbors. There is not and has never been any prospect of NATO launching a war of aggression against Russia itself.

Ironically, Ukrainian interest in joining NATO is actually the result of Russian attacks rather than the cause. Before Russia's attacks in 2014, only a relatively small minority of Ukrainians wanted to become part of NATO (with 30% or fewer supported joining the alliance). Support has gradually arisen since then (becoming a majority stance in 2021), largely because of Russia's ongoing aggression.

Putin's real motive is likely a combination of fear of the example effect of contiguous liberal democracies in nations culturally similar to Russia, and his desire to rebuild the Russian Empire and undermine Western liberalism. Regardless, there is no justification for Russia's attacks on Ukraine from 2014 to the present, and still less for the massive escalation of them that may be occurring now.

I have deliberately avoided the obvious argument that Putin's aggression is unjust because the Ukrainians are a distinct "people" with a right to autonomy based on ethnic self-determination. That isn't because I buy Putin's ridiculous claims that Russians and Ukrainians are essentially the same, and therefore must be united. It's because I reject, on principle, the theory that groups have a right to rule particular territories based on ties of race, ethnicity, or culture. I outlined the reasons why in Chapter 5 of my book Free to Move: Foot Voting, Migration, and Political Freedom (see also this article). But if you hold a more conventional view of the right to ethnic self-determination, then Ukrainians have as good a claim to it as anyone.

None of this, by itself, determines how the US and its allies should react to Russia's actions. While there are good reasons to avoid direct military conflict with Russia, that still leaves a wide range of other options. I will not try to consider their relative merits here. In this post, I have sought only to assess the legal and moral aspects of the horrible conflict unfolding before us.