In 2018, San Francisco voters approved a ban on the sale of all flavored tobacco products, including e-cigarettes and other vaping products. The idea was that flavorings make tobacco products attractive to youth, and that banning such flavors would discourage use by teens. Yet laws do not always have their intended effects.

San Francisco's flavor ban appears to have increased teen smoking, according to new research from the Yale School of Public Health, just published in JAMA Pediatrics. From the study:

San Francisco's ban on flavored tobacco product sales was associated with increased smoking among minor high school students relative to other school districts. While the policy applied to all tobacco products, its outcome was likely greater for youths who vaped than those who smoked due to higher rates of flavored tobacco use among those who vaped. This raises concerns that reducing access to flavored electronic nicotine delivery systems may motivate youths who would otherwise vape to substitute smoking. Indeed, analyses of how minimum legal sales ages for electronic nicotine delivery systems are associated with youth smoking also suggest such substitution. 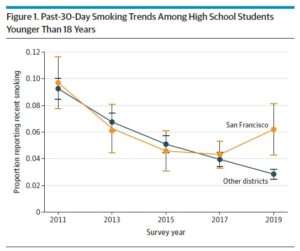 Is this surprising? It shouldn't be. The availability of a range of flavors is one thing that makes electronic cigarettes a more attractive source of nicotine than combustible cigarettes. Eliminate that advantage, and those seeking nicotine have less reason to prefer vaping over smoking. And because vaping is far less dangerous than smoking, this is bad for public health.

This new study is consistent with prior research which found the S.F. ban was associated with an overall decline in tobacco consumption but an increase in smoking among younger smokers. It is also consistent with research showing that restrictions on youth access to electronic cigarettes increase teen smoking and that increased e-cigarette taxes increase smoking rates.

As a parent, I do not want my children smoking or vaping, but there is no question which of the two is a greater threat--and it is not even close. Both combustible cigarettes and e-cigarettes contain nicotine, but only the former contains all the deadly byproducts of combustion. Efforts to reduce teen use of nicotine-products may be worthwhile, but if they have the unintended effect of increasing teen smoking, they are doing more harm than good. Good intentions are not enough to ensure that public health measures actually protect public health.