Reason is supported by:
Walter Olson 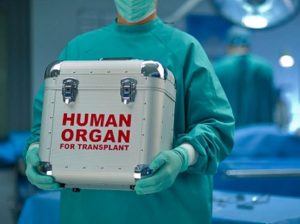 New Jersey resident John Bellochio recently filed a lawsuit challenging the constitutionality of the National Organ Transplant Act of 1984 (NOTA), the federal law banning the sale of kidneys and other human organs for transplant:

A New Jersey man found out it was illegal to sell his own organs after he attempted to do so when he was short on cash, and he is now suing the federal government.

Bellocchio's attorney, Matthew Haicken, told the Post in a statement "if John ever had the opportunity, he should be legally free to sell his kidney."

"I believe the current law is unconstitutional. People should have the right to do with their body whatever they want," Haicken said.

Much as I wish it were otherwise, I fear the lawsuit has little, if any chance of succeeding. Under current Supreme Court precedent, laws restricting economic transactions are subject only to very minimal "rational basis" scrutiny. I believe that precedent should be reversed, or at least significantly revised. But that is unlikely to happen any time soon.

But even if the lawsuit fails, perhaps it can call attention to the enormous harm caused by NOTA. The ban on organ markets quite literally kills thousands of Americans every year, who die because they cannot get kidney transplants  in time to save them. It also condemns many more people to years of needless suffering on kidney dialysis.

I summarized some of the issues at stake in this comment quoted in a story published by Fox News, which interviewed me on the subject of the lawsuit:

Many who are opposed to a legal market for organs argue that it would lead to the exploitation of poor people, but Ilya Somin, a law professor at George Mason University and adjunct scholar at the Cato Institute, said this concern is misguided.

"Donating a kidney is actually less risky than all sorts of other things that we allow people to do all the time, including poor people, like being a lumberjack. That's much more risky in terms of risk of death and serious injury, but no one says, 'Poor people shouldn't be allowed to be lumberjacks,'" Somin told Fox News….

Even though there may be some risks, Somin argued that the benefits of a legal market for organs far outweigh the costs.

I also agree with Bellocchio's attorney, when he points out (in the same story), that "'My body, my choice,' shouldn't just be for abortion." Legalizing organ markets is indeed an implication of the "my body, my choice" principle at least as much as being pro-choice on abortion (which I also am). In my view, the former is actually an easier case than the latter, since there is no even remotely plausible plausible argument that organ markets are somehow equivalent to murder.

I addressed "exploitation of the poor" and other objections to organ markets in greater detail here and here.

Paranthetically, it was interesting to me that the Fox reporter who interviewed me on this issue was so sympathetic to the idea of organ markets, even though much of Fox's socially conservative audience probably opposes it based on religious or "sanctity of the body" objections. On the other hand, increasing allowable compensation was for expenses incurred by organ donors was one of the Trump administration's relatively few good policies, as explained in this piece on the liberal Vox site, which rarely had much occasion to praise the Trump administration on other issues.

The organ market issue actually cuts across conventional partisan and ideological lines, with libertarians, economists across the political spectrum, and liberals concerned about increasing access to health care aligned against other left-wingers who fear that organ markets will lead to exploitation of the poor, and social conservatives concerned about protecting what they view as the sanctity of the body.

Over time, I hope more people will see the enormous life-saving and misery-reducing potential of organ markets. Even if they don't set aside their concerns entirely, they might begin to recognize that any such issues are not weighty enough to justify forcibly consigning many thousands of people to suffering and death.