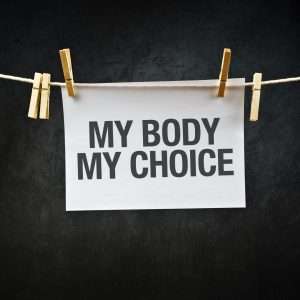 The recent passage of state laws imposing new restrictions on abortion has resulted in understandable anger in the pro-choice movement, and reiteration of the classic slogan "my body, my choice."   Or, as philosopher Daniel Silvermint puts it in a much-retweeted response to one of the new "heartbeat" laws, "if a woman has a heartbeat, you can't tell her what to do with her goddamn body, ever."

I very much agree! I fear, however, that many who repeat this and similar slogans don't embrace its other implications (which, I assume, apply to men as well as women). I hope they reflect further, and come to support more of them. Here are a few examples:

3. The War on Drugs should be abolished. All of it. Not just the ban on marijuana. Its whole purpose is to restrict what sorts of substances you can put in your body. What you put in your body should be your choice. And, like the ban on organ sales,  the War on Drugs harms large numbers of people, both in the US and abroad, in countries like the Phillippines and Mexico.

4. The government should not try to control people's diets through "sin taxes," or  restrictions on the size of sodas, and other such regulations. Here too, the goal is to restrict what we put in our bodies. Although I'm not a fan of other aspects of her worldview, Norway's new health minister is right when she says that people should be allowed to "smoke, drink and eat as much red meat as they want." If that leads to increased government spending on health care, the right solution is to restrict the subsidies, not bodily autonomy.

This list is far from exhaustive. Modest extensions of the argument would also cover many labor regulations and most immigration restrictions, for example. Both impose serious restrictions on bodily autonomy. But the above examples are at least enough to convey the general idea.

Several of the restrictions on liberty discussed above are probably even greater impositions than having to involuntarily bring a fetus to term. Bans on organ sales literally kill large numbers of people every year. The draft and other forms of mandatory national service often expropriate people's bodies for years at a time, not "just" nine months. And if a draftee is forced to engage in combat, he or she may face a severe risk of death or injury (often greater than that endured by women giving birth).

It's also worth pointing out that the items on the above list are, for the most part, easier cases for consistent advocates of bodily autonomy than abortion is. Few would deny that your autonomy does not include the right to attack other people. Thus, "my body, my choice" does not include a right to attack your body by breaking your nose with my fist. My right to my body is constrained by your right to yours.

Pro-lifers contend that abortion falls within this standard constraint on freedom because it takes the life of an innocent person (the fetus). The strength of that argument depends on the issue of  the moral status of the fetus, and whether it has a right to life comparable to that of a person who has already been born. I think that in most cases (at least in the first trimester, when the vast majority of abortions happen), it does not. But I admit it poses a difficult moral issue.

By contrast, in most cases, no innocent third party's life or liberty is threatened by the activities I listed above. In the rare exceptions where this is not true, the problem can be dealt with by narrowly targeted restrictions rather than by categorical bans – for example barring people from driving while drunk or high, rather than through drug and alcohol prohibition. Those who believe that "my body, my choice" should govern even this relatively difficult case of abortion should be at least equally willing to apply it in easier cases, where it is much tougher to argue that there is a tradeoff between liberty and innocent life.

I do not believe any right should be absolute. A great enough harm – perhaps even if indirect – might justify restricting virtually any liberty, if that were the only way to prevent it. But those who take the principle of bodily autonomy seriously should at least adopt a strong presumption against restrictions, and only support them in cases where there is very strong evidence both that the harm exists and that restricting liberty will solve the problem without creating comparably serious harms of its own.

"My body, my choice" has broad implications. I don't blame those who may not have carefully considered all of them. I ask only that they apply their own (well-founded) principles to more situations. If we truly believe that people have a right to control their own bodies, we should apply that ideal consistently. And it isn't too late to start!

UPDATE: In answer to various people who have raised this issue, I should note I am well aware that there are case-specific justifications for banning the activities I listed above. The purpose of this post is not to definitively settle these questions, but to explain why the principle of "my body, my choice," if applied  consistently, creates a strong presumption against banning them, even if not an absolute one. Several of the items on the list include links to earlier writings of mine where I address case-specific issues in greater detail, as with organ sales, mandatory jury service, and mandatory national service generally, among others.