I recently used Google Books to get a scanned copy of Justice Joseph Story's famous 1833 treatise, Commentaries on the U.S. Constitution.  And I noticed this inscription: 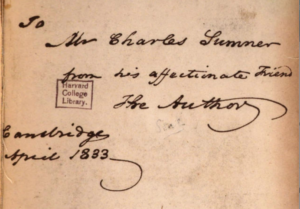 If you can't read it, it says, "To Mr Charles Sumner / from his affectionate Friend / The Author / Cambridge / April 1833".  Wait, I thought, Charles Sumner, as in the famous abolitionist Senator from Massachusetts?  And then I backed up a page and saw this: 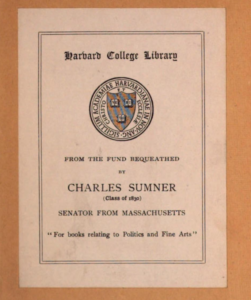 Yes, that Charles Sumner.  Some googling around tells me that in 1833, when his Commentaries came out, Justice Story was a professor at Harvard Law School in addition to serving on the U.S. Supreme Court.  Charles Sumner had graduated from Harvard College in 1830 and by 1833 was in law school at Harvard. Sumner's estate donated the book to the Harvard College library after he died in 1874, and the book became part of Harvard's collection and was scanned by Google Books.

How did Charles Sumner come to be a Supreme Court Justice's "affectionate friend"? The Discerning History blog explains that Sumner "studied under Joseph Story at Harvard Law School, who was a Supreme Court Justice. Sumner became one of Story's favorite pupils."  Another site explains that Sumner "served as a reporter for the United States Circuit Court, from which he published three volumes of Judge Joseph Story's decisions under the title Sumner's Reports."  The Joseph Story papers also include various items about (and perhaps from) Sumner.

Pretty cool! And free. You can download your own scanned electronic version of the inscribed copy of his Commentaries that Joseph Story wrote to Charles Sumner here at Google Books.

Mobile Homes Are a Crucial Source of Affordable Housing. Politicians Are Trying To Zone Them Out of Town.