Following the police killing of George Floyd and subsequent civil unrest in Minneapolis, some crimes–specifically gun crimes–have increased in that city while other kinds of crimes have not.  A"Ferguson effect" appears to explain this pattern. Minneapolis police have stopped making as many street stops as they made previously.  And given the unique responsiveness of gun crimes to policing activity, the tragic result of that pullback has been an increase in shootings.

This morning, Charles Fain Lehman of the Washington Free Beacon examined recent crime trends in Minneapolis in this very informative article–"Are Minneapolis's Police Protests Causing a Crime Wave? The specter of the 'Ferguson effect' rears its head amid Floyd protests." As explained in the article, an average of over 50 gunshots per day have plagued Minneapolis since Floyd's killing, prompting fears that hostility to the police is driving a violent crime wave.

As Lehman notes, police data from Minneapolis show firearm discharges at double 2019 levels.  Here is the data—with shots fired during the first half of 2020 being identified by the red line in the chart below: 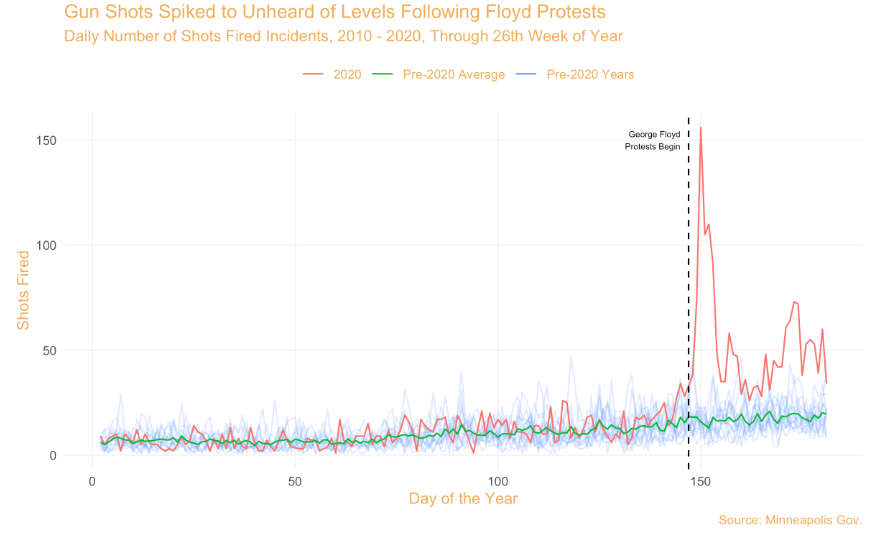 But, as Lehman explains, the data from Minneapolis do not show a general increase across all crime categories. Instead, the data show that most index crimes in Minneapolis are simply moving along with pre-existing trends. Lehman notes that "only rates of assault–particularly, second-degree assault, meaning assault with a dangerous weapon–have consistently risen since Floyd's death."  Lehman depicts all eight index crimes (arson, assault, auto theft, burglary, larceny, murder, rape, and robbery) and the only crime category with a consistent, post-Floyd-protest increase is assault–although homicides are generally up and robberies are trending upward as well.

Lehman further explains that the increase in shots fired and assaults could support an argument for a "Ferguson effect" in Minneapolis. The "Ferguson effect" was a term first coined by St. Louis Police Chief Sam Dotson III in late 2014, to account for an increased murder rate in some U.S. cities following unrest due to the police killing of Michael Brown in Ferguson, Missouri. Heather MacDonald (a law school classmate of mine) further popularized the term in a Wall Street Journal op-ed in May 2015.

MacDonald has recently suggested that a "Ferguson Effect 2.0" or "the Minneapolis Effect" is now responsible for recent violent crime increases, in Minneapolis and other large cities across the country.  But, as Lehman notes, in Minneapolis, while the "spike in gun violence definitely supports a renewed Ferguson effect, … the ambiguity suggested by many crimes going unaffected means the case is not conclusive." Lehman then discusses other research on crime increases following the Ferguson unrest that reaches differing conclusion on whether a Ferguson effect was responsible.

The point that struck me about the recent Minneapolis data is the pattern of crime increases, specifically increases that are concentrated in shootings and assaults, as well as possibly homicides and armed robberies.  A similar pattern of crime increases was present during the 2016 Chicago homicide spike.  A detailed paper on the Chicago spike by my University of Utah colleague Richard Fowles and me explains that in Chicago in 2016 there was a dramatic increase in gun-related crimes, but not other crimes. (See pp. 1600-01 of the study). Specifically, in Chicago in 2016 homicides increased substantially, by 58% year-over-year from 2015 to 2016.  There were also large (more than 20%) increases in robbery and aggravated assault–but not such large increases in other index crimes. Focusing specifically on gun crimes, there was a substantial increase in shootings in Chicago in 2016. Fatal shootings increased by 66% and non-fatal shootings increased by 44%.  (See Table 5).

Professor Fowles and I explain at length in our paper the reasons for concluding that the 2016 Chicago homicide spike was caused by an "ACLU effect." Specifically, we discuss an agreement that the Chicago Police Department struck in August 2015 with the ACLU regarding street stops (often referred to as "stop and frisks"). That agreement was implemented in December 2015, and produced about an 80% reduction in the street stops that Chicago police officers conducted during 2016.  Our argument is simple: As a result of the ACLU agreement, police significantly reduced the number of street stops they made, leading to more illegal guns on the streets of Chicago, leading to more shootings and homicides. Our paper estimates that the reduction in street stops in Chicago led to about 245 additional victims killed and about 1,108 additional shootings during 2016.

The current pattern in Minneapolis may similarly reflect a reduction in police activity focused on preventing gun violence. As has been widely discussed in the media, the Minneapolis Council is moving to "defund" its police department–or, more precisely, to remake the police department into a "public safety department" with less focus on licensed police officers.  Amid such discussions, officials in Minneapolis have noted (according to an article by the Star-Tribune) a "reluctance of some Minneapolis officers to take initiative amid intense scrutiny."

This reluctance to "take initiative" could mean a reduction in street stops and other self-initiated police activity that might produce an increase in gun crimes.  A recent paper by Tanaya Devi and Rolad G. Fryer, Jr., for example, links declines in self-initiated police activities with increases in homicide rates (although the paper believes that federal "pattern-and-practice" investigations are an important causal factor, a point that I disagree with for reasons beyond the scope of this blog post). And, in Minneapolis specifically, there have been recent suggestions from police union leaders that Minneapolis police officers "are not going to put themselves out there to get the proactive stops to get the guns off the street … [b]ecause they don't feel supported, after the fact," as Sgt. Anna Hedberg of the Minneapolis Police Federation recently put it.

So what do the data show regarding police stops in Minneapolis recently? Lehman has shared with me data that he has pulled from the Minneapolis Police Department data dashboard.  The data reveal that police stops have declined significantly in Minneapolis since the Floyd protests began.  The following chart depicts the data for suspicious person stops, suspicious vehicle stops, and traffic enforcement stops.  The red line depicts stops before 2020; the green line depicts stops for the first half of this year.  As is clear from the chart, with the exception of a singular spike a couple of days after the protests began, police stops of all types are below those conducted in earlier years, particularly "suspicious person" stops: 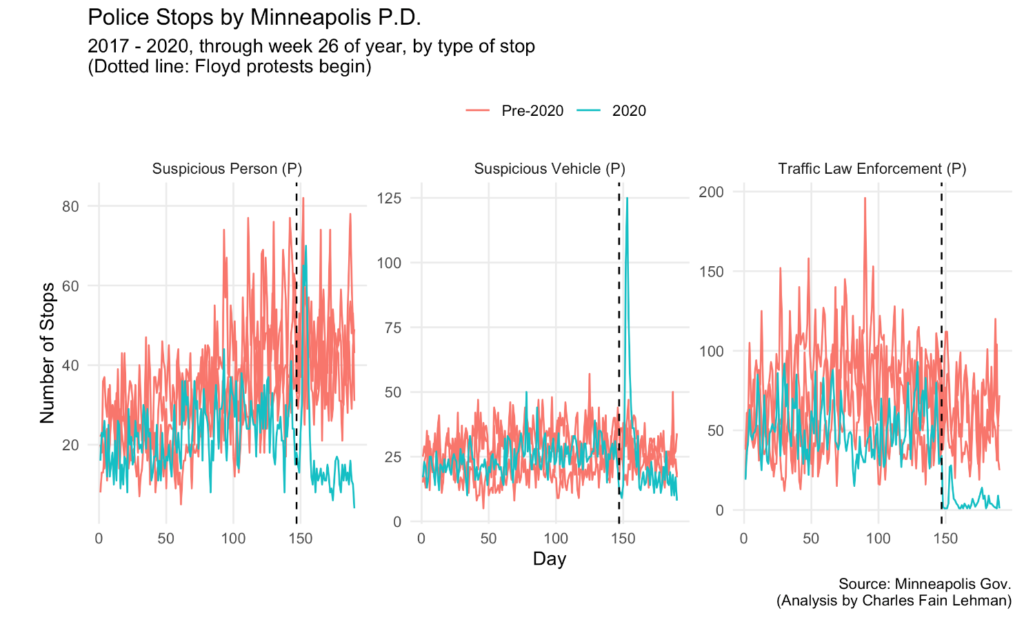 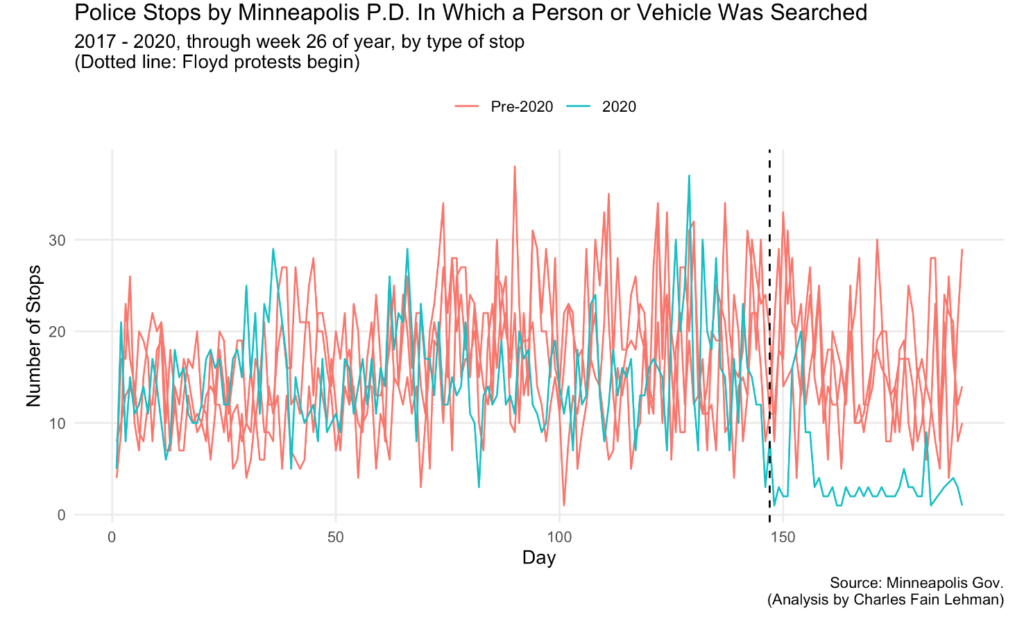 Of course, other factors apart from a decline in policing activity may be at play in Minneapolis's crime increases.  Further analysis is required to reach definitive conclusions. For example, some might argue that reduced trust in law enforcement following Floyd's killing is responsible. And Minneapolis has been under COVID-19 restrictions for several months, a confounding variable in any analysis of crime trends.  But such general factors would seem to be candidates for explaining increasing or decreasing crime rates across-the-board–not just the unique increase in shooting crimes that Minneapolis is suffering.

Gun crimes are specifically (and quickly) responsive to law enforcement initiatives, a point that Professor Fowles and I explore in our earlier paper (pp. 1605-08). Sadly, hundreds of additional shootings and deaths occurred in Chicago in 2016 (concentrated in the city's African-American community) as police were redeployed away from street stops that helped to deter shootings. As policing activities that prevent gun violence are now declining in Minneapolis, crime victims in the city may suffer the same tragic consequences.