This week, in excerpts from a forthcoming article, I am offering several predictions about a post-qualified immunity world. Today, I explain why plaintiffs' rate of success in civil rights cases would not dramatically change. 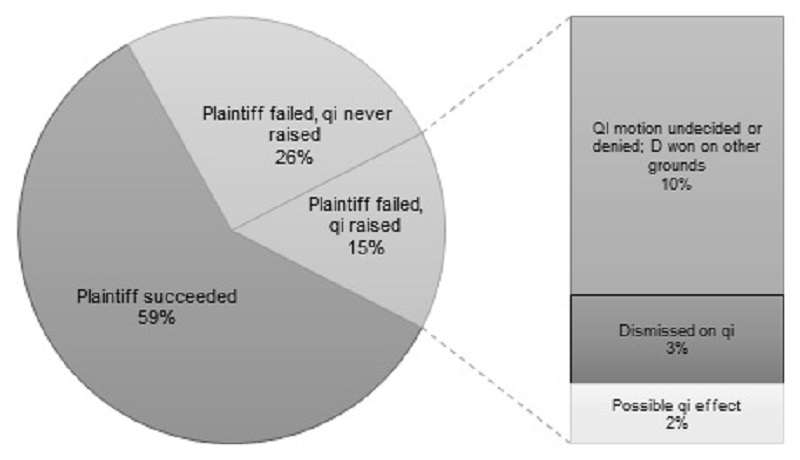 But I am skeptical that the dispositions in most of these cases would change.

In all but one of the cases formally dismissed on qualified immunity grounds, courts found that the plaintiffs had not met their burden regarding the constitutional claim or made clear they were skeptical about the cases' underlying merits. Even without qualified immunity, most or all of these cases would have been dismissed because the courts would have found plaintiffs failed to satisfy their burdens of pleading and proof.

Now consider the 11 cases where some claims were dismissed on qualified immunity grounds, and then defendants won at trial. It is impossible to know what the juries in these cases would have decided had they been able to evaluate all the claims and evidence. But plaintiffs in my docket dataset usually lost at trial—regardless of whether qualified immunity was raised. Plaintiffs' attorneys I interviewed and surveyed reported that juries are often more sympathetic to government defendants, and more likely to believe officers at trial. Several attorneys I interviewed predicted that more cases would go to trial in a world without qualified immunity, but that jurors' skepticism about civil rights plaintiffs' claims meant that they would not prevail more often.

Approximately 17% of qualified immunity motions and 34% of interlocutory and final appeals in my dataset were never decided, presumably because the cases settled while the motions were pending. These settlements may have been motivated by the plaintiffs' uncertainty about how the qualified immunity motions and appeals would be decided. Were qualified immunity abolished, plaintiffs might decide to take more cases to trial. But, as I have explained, defendants win the vast majority of cases that go to trial and attorneys believe jurors are hostile to these cases. So, if cases that would have otherwise settled would go to trial absent qualified immunity, at least some of those plaintiff "successes"—settlements—might turn into failures after trial.

For reasons I will explain on Thursday, eliminating qualified immunity would likely result in more civil rights cases filed. But these additional cases would likely have a similar success rate as cases filed today. Plaintiffs would still have to overcome the same burdens of pleading, discovery, and proof that are today the primary reasons cases get dismissed. And there is no reason to believe that the additional cases filed in a world without qualified immunity would be better able to overcome those obstacles than the pool of cases filed today.