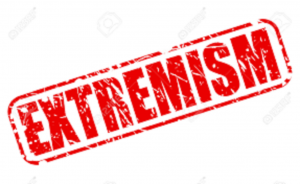 Historian Stephen Davies has an insightful article describing the growing influence of the "cultic milieu"—trends that make it easier for what were initially extremist fringe ideas to gain new adherents and begin to enter the mainstream:

The concept of the cultic milieu (hereafter CM) was formulated by a British sociologist called Colin Campbell, in an article published in 1972….

This is a kind of subterranean world or counterculture with a whole range of ideas that are strongly opposed to conventional beliefs and knowledge. These included highly heterodox and unusual religious systems (such as neo-paganism or Theosophy or Satanism), marginalised political ideologies…  and theories that rejected central elements of orthodox science, such as rejection of vaccination….

Campbell's insight was that these fringe beliefs did not exist in isolation from each other. They rather all mingled in a social space in which accepted and dominant ways of thinking about the world were rejected. Frequently people who started holding just one of these countercultural beliefs would come into contact with and pick up other ones with no apparent connection to the original belief….

One reason why it matters is that the boundaries of the CM are permeable—it is not clearly distinct from the orthodox mainstream in a fixed or permanent way. Ideas, symbols, and even ways of life can move in both directions between the orthodox mainstream and the counterculture of the CM. One of Campbell's main arguments was that although there was little formal connection, mainstream organisations such as established churches could draw upon the ideas that were being produced in the cultic milieu and make use of them or incorporate them.

Sometimes a whole body or wider system of ideas will move from fringe and countercultural status to being part of the mainstream conversation….

Right now the size and influence of the CM is growing. Ever more people subscribe to fringe beliefs and the availability of the kinds of ideas that circulate in the cultic counterculture has increased dramatically. This has happened before, notably in the period between roughly 1890 and 1930….

Colin Campbell's original model has been used to explain contemporary phenomena, above all the persistence and growth of radical right collectivist ideas, as well as radical left ones and other movements such as Islamism….

Economics can help explain why the size and influence of the cultic milieu is increasing now and grew in the earlier period….

For economists a clear factor is technological and economic developments that make it less costly to both spread ideas and information and to discover them, even when people holding those ideas do not have access to the dominant modes of communication. In the late nineteenth century cheap printing did this, along with the telegraph and telephone. By contrast the dominant communications technologies of the twentieth century (radio and television) did not because it was more difficult for proponents of non-mainstream ideas to use them.

Today social media and the internet are playing the same role as cheap printing but on an even larger scale (because the cost reductions are greater). Economic history also suggests that a growth of the cultic counterculture is a response not to secularization but to the social disruption brought about by episodes of rapid innovation…

Such episodes lead to a feeling for many people of social disconnection and displacement and bring what are seen as serious social costs. Ideas that reject received opinion then become attractive to many people as well as more accessible.

As Davies explains, this is a problematic trend, because many CM ideas are dangerous and likely to cause great harm if they come to be widely accepted, especially if they thereby public policy. Davies notes that the previous era of growing CM influence—1890-1930—was also the period when harmful ideologies communism, fascism, and eugenics, entered the mainstream, leading to large-scale atrocities and oppression.

I would add that the dynamic Davies identifies is particularly dangerous in the case of political ideas, for reasons I highlighted in an earlier post on misinformation online (see also here):

There is no shortage of nonpolitical con artists and hucksters online. But most internet consumers have learned to avoid them, or at least minimize the risk.

By contrast, we do a much worse job of minimizing the risk posed by political deception and disinformation. If you get an e-mail from a wealthy heiress who offers to pay you a million dollars, or see a website that promises to increase your sexual potency at a bargain-basement price, you are likely to be highly skeptical… [M]any people don't apply anything like the same degree of common-sense scrutiny to political snake oil – especially when it conforms to their preexisting views. Politicians and activists who peddle dubious conspiracy theories, promise to give you something for nothing, and otherwise spread disinformation, often gain a wide following….

In most private-sector contexts, we have strong incentives to guard against deception and keep wishful thinking under control. If you believe the promises of the self-proclaimed Saudi prince who e-mails to say he will send you a million dollars tomorrow if only you will forward him a much smaller sum today, you will probably lose your money…

By contrast, if you find a website or Twitter feed that promises we can promote social justice or make America great again by supporting some dubious candidate or public policy, incentives for skepticism are much weaker. If you get taken in and end up with false political beliefs that lead you to vote for the "wrong" candidate on election day, the chance that your vote will make a difference to the outcome is infinitesimally small. And even if your mistaken vote does somehow end up being decisive, most of the cost of the error will fall on the rest of society, not you or your family.

As a result, most voters have strong incentives to be "rationally ignorant" about politics, often remaining unaware of even very basic information. They also tend to a poor job of evaluating what they do learn – including believing extremely dubious claims that reinforce their preexisting views, while ignoring strong evidence that cuts the other way.

This suggests that the cultic milieu is more of a menace when it comes to political issues than beliefs on matters where individuals have more incentive to be wary of misinformation. If political CM ideas provide you with psychic gratification, you often have little incentive to carefully scrutinize their validity.

Unfortunately, it is easier to describe the problem than to solve it. It may be tempting to respond to this analysis by concluding that we should just abjure all non-mainstream ideas, especially political ones. But that would be a mistake. History shows that what start out as radical non-mainstream ideas often turn out to be right: abolitionism and gender equality are famous examples. Of course, you might expect me to say that, since I am, after all, a libertarian and hold some pretty radical views myself! But it's true nonetheless. The correlation between the truth of an idea and its degree of acceptance by mainstream public opinion is often weak, at best.

Another possibility is to try use the power of government to prevent, or at least impede, the spread of harmful fringe ideas online. Examples include various efforts to use government regulation to prevent the spread of "fake news." However, such ideas have all the same flaws as more traditional forms of government regulation of speech. Rarely can governments be trusted to sift bad ideas from good ones, and they have strong incentives to use such power to suppress opposition speech, regardless of the true merits of the opposition's ideas.

In assessing non-mainstream ideas, we ideally want a reliable way to separate out the wheat from the chaff—preferably one that is easy enough to use that it can be employed by nonexperts. Sadly, we are far from fully achieving that. And the dynamics of political bias and ignorance I described above ensure that at least when it comes to political ideas, many people won't bother to use reliable sorting methods even when they are available.

While there is no easy way to neutralize the dangers of the cultic milieu without simultaneously suppressing many potentially valuable ideas, there are some modest steps people can take to reduce the  likelihood of being taken in by quackery.

One is to give serious consideration to expert opinion, while taking due account of experts' various limitations. Other things equal, a non-mainstream idea that has significant support among experts in the relevant fields is more likely to have some real value than one that lacks it. It also pays to take some of the steps I summarized here, such as becoming more aware of one's own possible biases, distrusting "gut feelings" on complex issues, avoiding heavy reliance on social media, attempting to consider a variety of different views, and refraining from forming strong views on issues you know little about. But none of these precautions is foolproof, especially when it comes to issues we know little about and do not have time to study carefully.

Ultimately, the most effective remedy for political snake oil may be to reduce the size and complexity of government, and and make more of our decisions in settings where we have better incentives to seek out good information and use it wisely. We cannot completely eliminate the cultic milieu. Doing so would be a bad idea even if we could. But we should recognize the challenges it poses, and do more to incentivize people to be properly discriminating consumers of its "products."