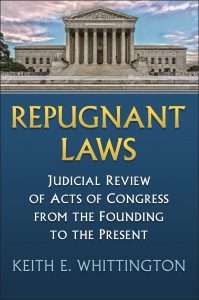 As the justices announce their opinions in the big cases of the year, and as presidential candidates announce their plans to reform the Court so that it will be less political, a taste from the conclusion of my new book, Repugnant Laws, which can be found wherever fine books are sold.

Americans sometimes tell themselves a story about the Supreme Court. In this story the justices stand removed from politics, like priests working in a marble temple. Constitutional law imposes fixed limits on the arena of political choice, and the elected members of Congress operate within boundaries marked out and defended by unelected justices who lean against the prevailing democratic winds. This story is sometimes told in a fearful tone, with the people and their representatives subjugated to the will of distant philosopher-kings. It is sometimes told in a more hopeful tone, with the benighted masses and feckless politicians defanged by wise jurists. But in both versions, the justices occupy an Archimedean point outside the world of politics and from there can reshape the course of events.

For better or for worse, we should doubt that the Court is as independent of politics as that story would suggest. The individuals who become justices are socialized into a political world that they share with their contemporaries. The justices are elevated to the bench through a political appointments process that filters out those who are likely to be dramatically at odds with the political leaders who assemble victorious electoral coalitions. The justices live in the world and are buffeted by the same maelstroms of opinion and emotion that affect those around them. Their work sometimes involves matters of arcane knowledge and obscure significance, but it often involves matters of fundamental values and partisan contestation. The justices are not disinterested observers of the political world; they are powerful actors within it. . . .

In exercising the power of judicial review of federal statutes across American history, the Court has operated from a political perspective and in alliance with coalition partners elsewhere in the government. The Court has not generally operated as an antidemocratic force obstructing the plans and policies of legislative majorities.  It has, on occasion, vetoed important federal policies, but it has more often operated within dominant political coalitions than against them. It has exploited fissures within democratic majorities rather than setting itself against those majorities. It has primarily advanced the values and policies that have won electoral support rather than those that have met electoral defeat.

The justices are best understood as political partners. They are not minions, simply doing the bidding of party leaders. They are allies of coalition leaders, not their agents. As such, they exercise some modicum of independence and discretion. They are able to articulate their own understandings of constitutional values and commitments. Those commitments may well be shared by others, be debated and advanced through party platforms and legislative debates, but the justices give them shape and effectiveness. The justices set their own priorities, and in many cases have their own distinctive set of concerns. . . .

. . . The Court often defies Congress in the name of values to which party leaders are putatively committed. Those decisions might well be persistently controversial, in either the sense that the general public might not overwhelmingly endorse them or in the sense that legislators might be incapable of constructing a majority willing to cast the same vote themselves. The insulation and independence of the Court allows the justices to do things that the elected members of Congress might not be willing and able to do, even if the members of Congress are not implacably opposed either. The Court has rarely stood for universally embraced and historically enduring political principles, in part because there are not very many such principles – or at least not very many such principles that must be deployed to invalidate an action of Congress. Congress rarely violates universally embraced and historically enduring principles. Congress does, however, routinely violate principles that are more contested and less enduring but that nonetheless command substantial political support within a given historical era. When the Court intervenes to vindicate those principles against an errant national legislature, it is often doing the political work that political leaders would like it to do. It is acting as a player within democratic politics, but not simply as a constitutional guardian standing outside of democratic politics.