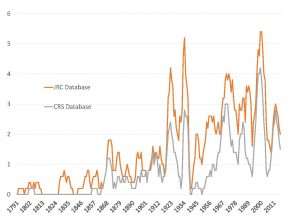 As I noted last week, there once was a robust political and scholarly debate over the answer to the question of how often the U.S. Supreme Court had struck down a provision of a federal statute. The question was thought to matter because the history implied something about how legitimate the power of judicial review might be and how aggressively the courts should use it. The answer was disputed because neither the Court nor Congress kept track of how often a law had been struck down and the correct count was not obvious.

Congress eventually got into the act. In the early twentieth century, the Senate Rules Committee began to produce a regularly updated document that reproduced the text of the U.S. Constitution, all of its amendments, and citations to Supreme Court cases "construing its several provisions." Eventually that task was handed off to the Legislative Reference Service, and after World War II the Senate Judiciary Committee engaged the eminent Princeton constitutional scholar Edward S. Corwin to take on the "highly significant and delicate enterprise" of providing a map "of the great historical landmarks of Constitutional jurisprudence" – including a list of cases in which the Court had struck down an act of Congress as unconstitutional.

The Corwin list became canonical and has since been maintained by the Congressional Research Service. But even that list went through permutations, with Corwin adding and deleting cases as he settled on exactly what he wanted his list of cases to convey.

The standard list of cases in which the Court has invalidated a federal law is inadequate. The contours of judicial review as it has been practiced are not clearly identified with bright lines. Corwin made implicit choices about what exactly he was going to count as an instance of judicial review for this purpose, and he might well have made some mistakes. There is good reason to believe that his list is underinclusive of the total number of instances in which the Court has refused to apply a federal statutory provision because it transcended the boundaries of Congress's constitutional authority.

The Corwin list significantly understates how often the U.S. Supreme Court has used its authority to interpret and enforce constitutional limitations on the scope of the legislative authority of Congress. Some cases have simply been lost in obscurity. Some cases do not feature the Court using the magic words, "null and void." Some cases involve the Court punching a gaping hole in a statutory provision out of respect for constitutional requirements while leaving the text intact and some set of possible applications theoretically still available.

Although throughout its history the Court most often upheld congressional statutes against constitutional challenge, it has enforced constitutional limits against Congress in far more cases than has been conventionally recognized, including a sizable number of cases during the first decades of the Court's existence when we have traditionally said that the justices were never willing to defy the will of Congress.

The Judicial Review of Congress Database is now publicly available. It includes a list of all the cases in which the Court has substantively reviewed the constitutionality of an act of Congress from 1789 through the spring of 2018, as well as a variety of associated information such as identifying information about the statute that was reviewed, a measure of its importance, and the length of time between the passage of the statutory provision and its review by the Supreme Court. The details of the standard for case selection and the process of identifying instances of judicial review are elaborated in the appendix to my book, Repugnant Laws. Over time I expect to update the database, add new variables, and create some more reader-friendly lists of the some 1300 cases in which the Court exercised the power of judicial review over Congress.