The Culture Transplant: How Migrants Make the Economies They Move to a Lot Like the Ones They Left, by Garett Jones, Stanford University Press, 228 pages, $25

Almost everyone will take Garett Jones' The Culture Transplant as a forthright defense of not just maintaining existing immigration restrictions but tightening them. Every chapter strongly implies that liberal immigration policies are naïve and myopic. Jones, an economist at George Mason University (where I also teach), concludes by warning that admitting millions from the poorest nations will impoverish all humanity: "Innovation would decline overall, and since new innovations eventually spread out across the entire planet, the entire planet would eventually lose out." Even his support for high-skilled immigration is restrained: Jones wants to welcome "immigrants who have substantially more education, more job skills, more pro-market attitudes, than the average citizen" (emphasis mine), and he advocates "instantaneous citizenship" for "one-in-a-thousand minds" such as "Nobel laureates, great writers, and innovative scientists." 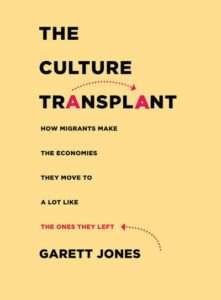 This research is called the "Deep Roots of Growth," or just "Deep Roots." Its punchline is that countries now inhabited by people whose ancestors were relatively economically advanced in the distant past have a strong tendency to be absolutely advanced today. "Now inhabited" is key; according to Deep Roots research, a major reason the United States is rich today is that modern Americans are mostly descended from people who were rich by the standards of their time. Economically, it doesn't matter that in 1500 A.D., the current area of the United States was largely populated by hunter-gatherers, because the descendants of these hunter-gatherers are now (for horrifying reasons) a tiny sliver of the population.

The initial Deep Roots papers focus on the emergence of agriculture and government. They conclude that the earlier a country's ancestors adopted farming and states, the richer the country is today. Later work, which Jones prefers, focuses on the adoption of key technologies. Above all, if a country's ancestors were technologically advanced in 1500 A.D., their descendants tend to be much richer today. Critically, this isn't merely fortuitous for the descendants. Jones spends a whole chapter on the world's innovation leaders: China, France, Germany, Japan, South Korea, the U.K., and the U.S. He calls them the "I-7." Thanks to the product of august ancestry and high population, he argues, these seven countries deliver almost all the innovation that fuels the progress of humanity. If they let migration degrade their cultural quality, he argues, the domestic damage will spill over to the whole world.

Jones concedes that these are long-run results: "In the short run—a couple of decades, say—admitting an extra ten million people each year from the world's poorest countries into the high-innovation I-7 nations would surely improve the lives of almost every immigrant. After all, government and culture rarely change much in the short run." He admits Deep Roots predictions aren't perfect—most notably, China and India, the world's two most populous countries, are far poorer than the models predict. Still, he thinks the smart money should bet on the adage, "The best predictor of a people's success in the long-run future is success in the people's long-run past."

Given this adage, the disconnect between Jones' social science and his recommended immigration policies is vast. The most restrictive immigration policy the research supports is: "Freely admit anyone who improves your country's Deep Roots." This isn't predicted merely to raise living standards in the receiving countries, but also to fuel global growth by filling the I-7 with high-potential workers. For most of the world's richest countries, this implies radical deregulation—especially for the United States, because despite our high living standards, our ancestry scores are mediocre.

Throughout The Culture Transplant, Jones talks about researchers "hiding the ball": dazzling readers with technical prowess instead of patiently pondering what they've really shown. I submit that treating Deep Roots as an argument for anything other than radical liberalization of immigration is an egregious case of hiding the ball. And it gets worse: The mathematics of the seminal Deep Roots paper implies that if the entire population of the Earth moved to the United States, gross world product would still multiply more than fourfold. That's even more dramatic than Michael Clemens' famous result that open borders would "double global GDP," which Jones also neglects to cite. If that isn't "hiding the ball," what is?

At this point, a reasonable reader will wonder, "How solid is the research upon which Jones relies, really?" While Jones vocally "kicks the tires," he should have kicked harder and longer. I started documenting major doubts about Deep Roots research almost seven years ago, and he replies to virtually none of it.

Jones responds to just one of my objections: that Deep Roots gives deeply false predictions for China and India, the world's two most populous countries. (In fact, it gives deeply false predictions for the three most populous countries, because the United States sharply overperforms). His reply: Since China and India are growing quickly, the anomaly is shrinking. Fair enough, but the anomaly can only shrink rapidly because the Deep Roots story flopped for both countries for centuries. Furthermore, with the help of the original researchers and the economist Nathaniel Bechhofer, I was able to show that if we statistically weigh countries by their populations and redo the entire analysis, the original Deep Roots results vanish. This doesn't necessarily mean the Deep Roots literature is worthless, but it does raise doubts about Jones' tire-kicking.

The Culture Transplant explores several other related topics, especially the speed of cultural assimilation and the dangers of diversity. Much of this research was new to me, so I'll refrain from criticism until I have had the time to kick the tires to my own satisfaction. But I fear that I'll find that Jones is again hiding the ball. Why? Because when I know a piece well, I often see the ball he's trying to hide. Most strikingly, when he discusses Robert D. Putnam's famous article on the effects of ethnic diversity on social trust, he neglects to mention that moving the U.S. from its current diversity to the maximum possible diversity would reduce trust by a microscopic 0.04 on a 4-point scale. Much ado about next to nothing.

The Culture Transplant is enviably well-written. Jones affirms ugly truths like: "The many lives…that would be dramatically extended over the next half century if Indonesia's 300 million citizens became twice as rich are, in my personal estimation, worth the genuine risk of an ethnic riot every decade that kills two thousand people." We should all have such courage and eloquence.

This book is the most intellectually serious critique of the libertarian open borders position. As such, I expect that intellectually serious critics of the libertarian open borders position will hail it as a decisive refutation of a dangerous conceit. But even if you accept its evidence, that data argues for the radical liberalization of immigration, including from many Third World countries, though arguably with a different mix than we see today.

Jones is not a lifelong opponent of immigration. He signed a 2006 pro-immigration letter—and 10 years later, his book Hive Mind affirmed, "I've always been glad I signed this letter: it sums up the great promise of immigration. It's always worth reminding citizens of high-productivity countries that immigration is still the most reliable way to raise the living standards of people in low-productivity countries." The first sentence of Jones' first chapter is a callback to his pro-immigration past: "This book tells a true story that this economist sincerely, truly does not want to believe."

The good news is Jones can accept all the evidence he presents while renewing his earlier support for much more immigration. The bad news is that much of his evidence is overstated and undervetted, so neither he nor anyone else should use it to dramatically revise their views on immigration one way or the other.

Damon Root | From the January 2023 issue

Fiona Harrigan | From the January 2023 issue