A purge of pro-U.S. bot accounts on Facebook and Twitter has given way to an inside look at covert propaganda on social media. In a new report, the Stanford Internet Observatory (SIO) and Graphika analyze these pro-America accounts, including the kind of content they shared and the paltry influence they had.

In July and August, Twitter, Facebook, and Instagram removed more than 100 accounts spreading pro-U.S. messages in Afghanistan, Central Asia, and the Middle East. The accounts—including fake people with images generated through artificial intelligence as well as sham news outlets—were kicked off Twitter for violating its policies on "platform manipulation and spam" and off Facebook for "coordinated inauthentic behavior."

The tech companies then provided a portion of this account data to SIO and Graphika. "The platforms' datasets appear to cover a series of covert campaigns over a period of almost five years rather than one homogeneous operation," notes the SIO/Graphika report, titled "UNHEARD VOICE: Evaluating five years of pro-Western covert influence operations." These campaigns "consistently advanced narratives promoting the interests of the United States and its allies while opposing countries including Russia, China, and Iran." 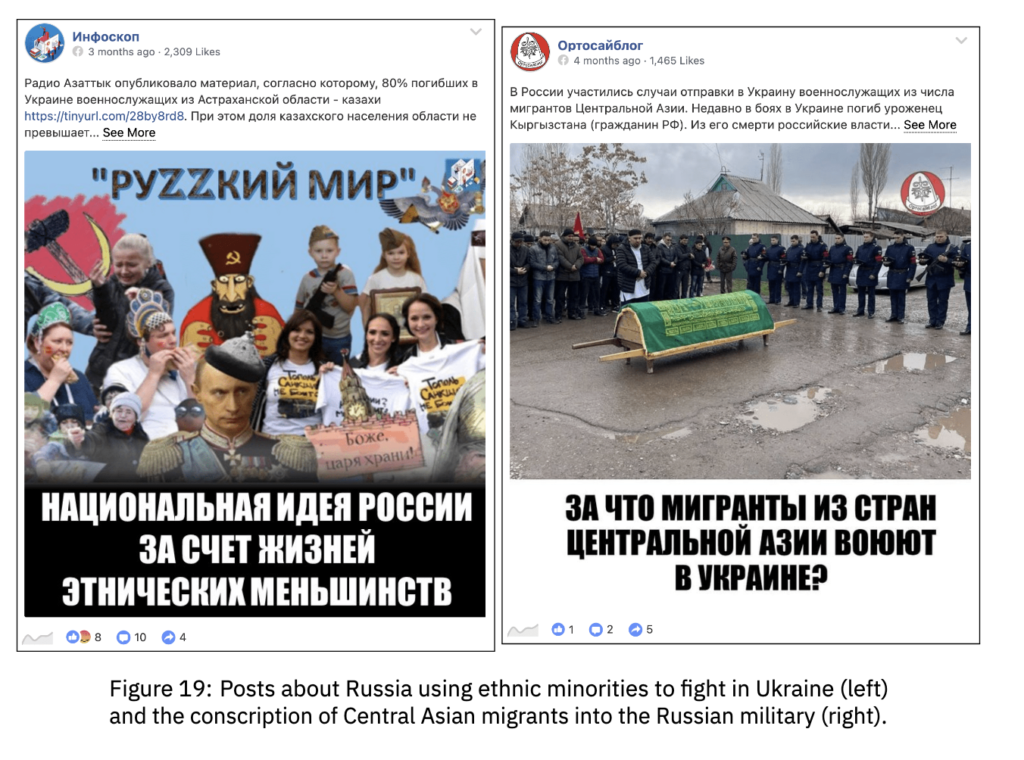 The accounts shared myriad articles from U.S. government-funded media such as Voice of America, as well as links to websites run by the U.S. military.

They also shared memes mocking and criticizing certain foreign leaders, as well as random content and hashtags presumably meant to generate attention. (Also: "Accounts often replied to tweets with the face with tears of joy emoji.") 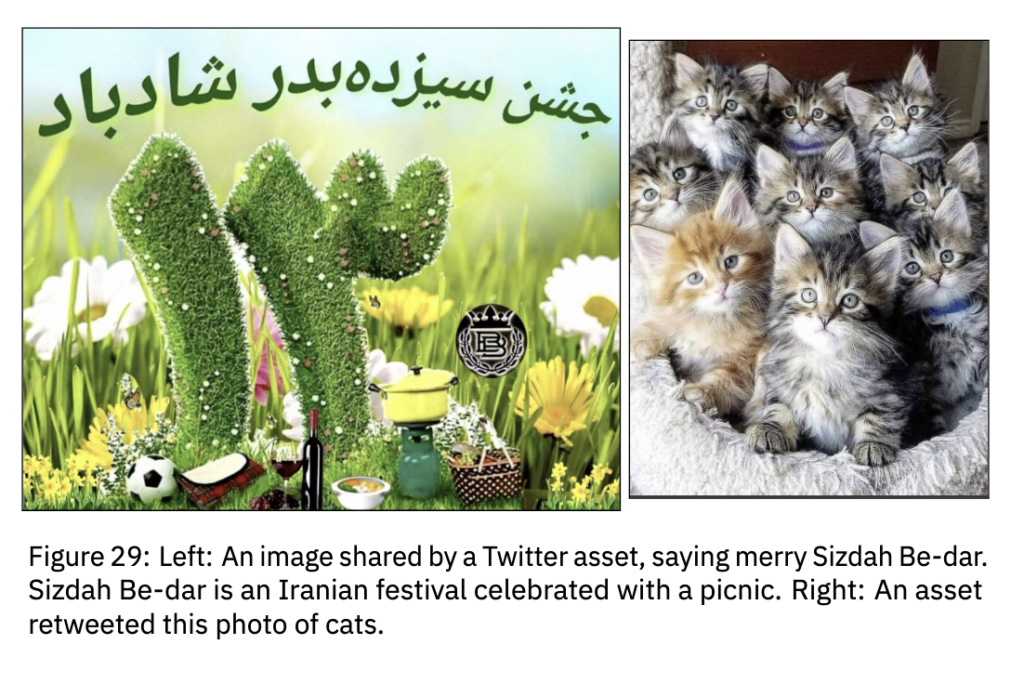 The vast majority of posts and tweets we reviewed received no more than a handful of likes or retweets, and only 19% of the covert assets we identified had more than 1,000 followers. The average tweet received 0.49 likes and 0.02 retweets. Tellingly, the two most-followed assets in the data provided by Twitter were overt accounts that publicly declared a connection to the U.S. military.

The lack of actual influence draws into question why exactly these accounts exist.

But their ineffectiveness shouldn't be surprising. In the wake of the 2016 election, much was made of Russians posing online as U.S. citizens and media and then using these accounts to promote particular political ends or simply sow division. But these efforts' tendency to spur panic and fear has always been a bit strange, given "the puny reality" (as Reason's Jacob Sullum put it) of their footprint. 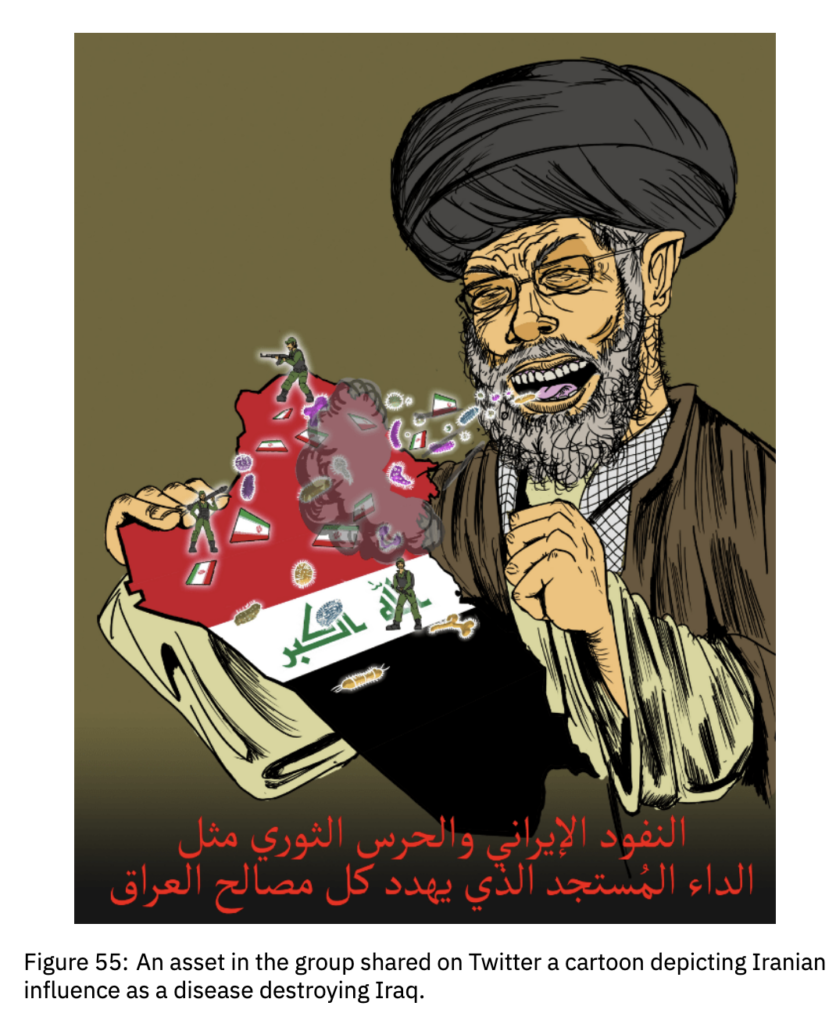 The shock and outrage generated by Russian attempts to influence U.S. politics was also odd, given all the ways the U.S. government has historically engaged in covert influence operations abroad—and still seems to be doing so.

Not all of the accounts in the social media datasets could be directly traced to the U.S. government, though some could:

The Twitter dataset provided to Graphika and SIO covered 299,566 tweets by 146 accounts between March 2012 and February 2022. These accounts divide into two behaviorally distinct activity sets. The first was linked to an overt U.S.government messaging campaign called the Trans-Regional Web Initiative, which has been extensively documented inacademic studies, media reports, and federal contracting records. The second comprises a series of covert campaigns of unclear origin. These covert campaigns were also represented in the Meta dataset of 39 Facebook profiles, 16 pages, two groups, and 26 Instagram accounts active from 2017 to July 2022.

Twitter said the sham account activity originated in the U.S. and the U.K., while Facebook reported that it came from the U.S. alone. However, many of these accounts purported to be people or publications based in other countries.

In at least one instance, a Twitter account that purported to be an Iraqi man was previously identified as an account run by the U.S. military.

The account "was created in November 2016 and claimed in its bio to be 'always in the service of Iraqis and Arabs.'" It "used a profile picture likely generated using artificial intelligence techniques," and "an Instagram account and a Facebook profile in the Middle East group used the same image as well." 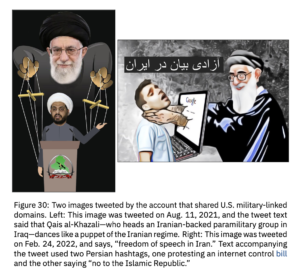 Accounts less directly linked to the U.S. military were also suspiciously invested in military or other government-linked content. For example:

In 2020 and 2021, a Twitter account that presented itself as an Iranian individual living in "Cambridge" posted links to almashareq[.]com and diyaruna[.]com 25 and 26 times, respectively. Both websites say they are sponsored by the U.S. Central Command (CENTCOM) and post pro-Western articles in Persian and Arabic. This Twitter account was created on June 16, 2019, and its Twitter bio linked to a Telegram account with the same name and just three subscribers.

Another group of analyzed accounts mentioned the United States Agency for International Development 94 times on Twitter and 384 times on Facebook.

SIO and Graphika focused their analysis largely on the covert propaganda accounts, rather than those overtly linked to the U.S. government. 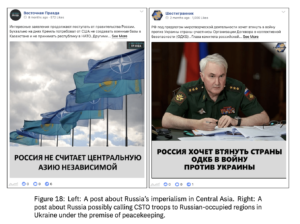 "Importantly, the data … shows the limitations of using inauthentic tactics to generate engagement and build influence online," states their report.

For instance, an operation targeting Russian-speaking Central Asian audiences "focused on praising American aid to Central Asia and criticizing Russia, particularly its foreign policy." But the posts "gained little traction on social media. Facebook posts often had fewer than 10 likes, and only 10 posts gained more than 1,000 reactions." Only two videos from this operation received a significant number of views, and one "was a non-political TV news excerpt about an Uzbek farmer growing fruits in the desert."

A crackdown on "harmful" content on Chinese apps has silenced feminist concerns:

In June, a video of a group of women being violently attacked in China went viral. Two days later, Weibo announced a zero-tolerance policy on "harmful speech." Take a guess who was censored and banned under the rule against "harmful" posts. https://t.co/jGuTfULbja pic.twitter.com/HVAnZqEqPC

A new view of income inequality. "Contrary to conventional wisdom, the most dramatic and consequential change in the distribution of income in America in the past half-century isn't rising income inequality but the extraordinary growth in income equality among the bottom 60% of household earners," write Phil Gramm and John Early in The Wall Street Journal:

Donovan Lewis was unarmed and sitting in bed next to what may have been a vape pen https://t.co/BObgPGTcs4

• The Food and Drug Administration has authorized an updated COVID-19 booster vaccine that specifically targets omicron subvariants. "The agency cleared two options aimed at the BA.5 variant of Omicron that is now dominant: one made by Pfizer and its German partner BioNTech for use in people as young as 12, and the other by Moderna, for those 18 and older," notes The New York Times. "Only people who have received at least two shots will be eligible for the updated booster."

• 11,000 federal inmates were sent home during the pandemic. Only 17 were arrested for new crimes, reports Reason's C.J. Ciaramella. Most of these were drug crimes, "while the rest of the charges included smuggling non-citizens, nonviolent domestic disturbance, theft, aggravated assault, and DUI."

• Sarah Palin lost her election in Alaska. Palin was competing for Alaska's sole congressional seat with former state Rep. Mary Peltola and the grandson of the man who previously held the seat. Peltola won, becoming "the first Democrat elected to that seat in nearly 50 years, and only the third Democrat since Alaska became a state," notes Reason's Joe Lancaster. "She is also the first Native Alaskan to represent the state in Congress."

• Jesse Singal offers a worthwhile critique of an Inside Higher Ed column on affirmative action.

• President Joe Biden is going to give a speech on the "battle for the soul of the nation" tonight.

White House schedule for tomorrow: "8:00 PM THE PRESIDENT delivers a primetime speech on the continued battle for the Soul of the Nation."