Prices were 9.1 percent higher in June than a year before, exceeding expectations and surging to a 41-year high.

Department of Labor data released Wednesday morning showed that inflation picked up speed in June, rather than slowing. Prices rose by 1.3 percent during the month, up from a 1 percent increase in May. A sharp rise in energy prices, and gasoline prices particularly, helped power the annualized inflation rate to its highest levels in more than four decades. Food prices rose by 1 percent during June, and are up 10.4 percent over the past year. 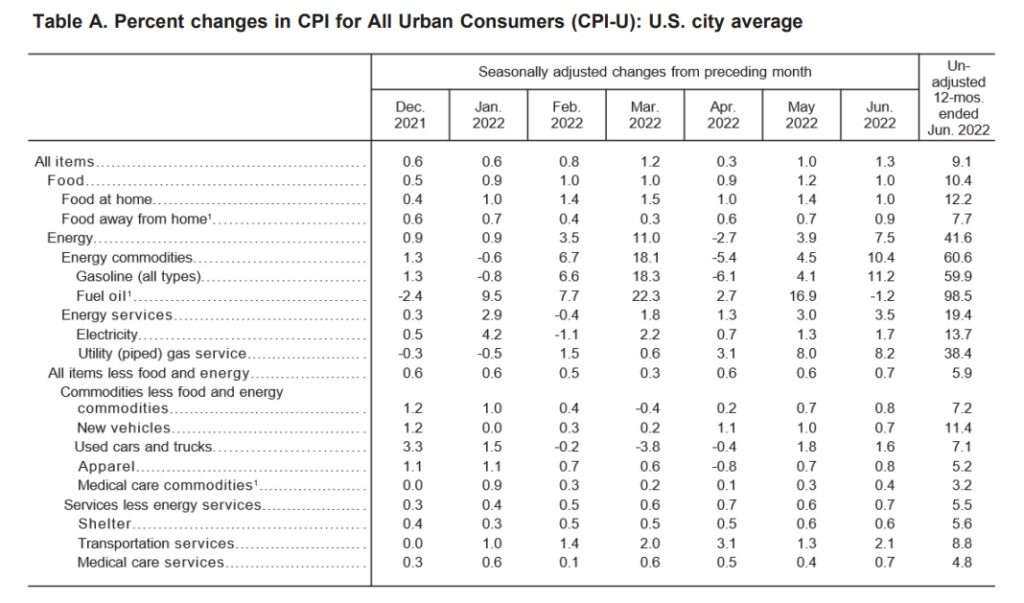 Meanwhile, so-called "core inflation" which filters out the more volatile prices for energy and food, accelerated as well. That category saw a 0.7 percent increase in prices during June, up from 0.6 percent in May.

Chicken: Up 19% in past year-->Biggest increase ever

Wednesday's topline inflation number came as a surprise—Dow Jones, which publishes expected inflation figures a few days before the official government data is released, expected 8.8 percent rather than 9.1—and might signal that the battle against rising prices will prove even more difficult.

The Federal Reserve raised interest rates by 0.75 percent at its meeting in June and is expected to do the same later this month. Economists polled by Reuters expect that further interest rate increases are on the horizon.

Higher interest rates should help slow inflation by signaling a marginal benefit to saving over spending. Inflation is the result of too many dollars chasing the same pile of goods and services, so higher interest rates make it less attractive to borrow and spend.

But how quickly that strategy will work remains an open question. Larry Summers, the former Obama administration treasury secretary who correctly warned about rising prices last year in the wake of the American Rescue Plan's passage, believes it will be a persistent problem.

"There are no miracle cures or silver bullets," Summers told a radio station in Boston last month. "Monetary policy, which what the Fed is doing, belatedly, does work with respect to inflation, but it takes quite a while."

One potential glimmer of hope is in gasoline prices, which have been falling during July after rising sharply in June and being a major driver of overall inflation for much of the year. The national average today is $4.63 per gallon, according to AAA, down $0.14 from a week ago and $0.38 from this time last month. Falling gas prices might ease prices for other goods too, since they'll make it less expensive to ship products across the country.

Another positive sign could be the glut of excess goods that retailers say they have to unload in the coming months. After months of pandemic-related supply chain snafus, department stores and other big retailers have piles of goods that they would have liked to sell long ago—which means consumers could be seeing big discounts for certain items, The Wall Street Journal reports.

Politically, however, gas prices well over $4 per gallon and persistently rising prices throughout the rest of the economy continue to be a yoke around President Joe Biden's neck. Polls show that inflation and prices are Americans' top concerns.

And yet, the White House and Congress are reportedly restarting negotiations on a new version of Biden's Build Back Better plan, which would dump billions of dollars into the economy, likely worsening inflation while also raising taxes on families and businesses already battered by inflation.

Apparently, some people have learned nothing from the past year.