"I've literally been to like five of those now, and I don't know what the fuck I'm about to do for dinner," said NYC newcomer Griffin Green in a TikTok video posted this past week, referring to the bodegas of the South Bronx. "Like, where are the Krogers and the Whole Foods at? I'm about to eat fuckin' cereal and ramen for dinner," Green continued.

This, and other TikTok videos in the style of day-in-the-life vlogs (that have since been roasted and riffed on), seem to have gotten him fired from software company Outreach, which had hired him as an entry-level sales development representative. "I'm in the Bronx for a few weeks so I'm like the only white dude in this whole gym, so I got this NAACP shirt so these people vibe with me more," said Green in one video. He talked about how many gay people there are in NYC (during Pride celebrations) in another, innocuously displaying dude-from-Michigan-lands-in-the-big-city culture shock. He briefly shows his employment offer letter, marked as confidential, in another TikTok, though it's very hard to make out details within it; in an email to Reason, the company claims this was the reason they fired him but awkwardly follows that statement with a seemingly unrelated one about diversity, equity, and inclusion. "It is against company policy for employees to leak private and confidential information, and grounds for termination," wrote Andrew Schmitt, vice president of communications. "We remain committed to building our culture that finds strength in our diversity, equity and inclusion—and a company where all can succeed."

If they were firing Green for the offer letter image alone, it doesn't make sense why the company's Twitter account made news of his firing public via a tweeted response to people who were angry about the bodega video or why they responded to the mob at all. When I spoke with Green, he said HR had called him on his second day of work, notifying him that he'd be let go for both the heat that they'd gotten from the videos and the sharing of the confidential offer letter. Green notes that the offer letter had been on TikTok for three weeks prior but only just now caught their attention.

Had Green framed his bodega TikTok as an exploration of the struggles with food deserts in the South Bronx, he'd probably still have a job, having never faced the mob's ire. He may have even been lauded instead of derided as a racist "Chad" from the Midwest. But a few low-follower Twitter accounts found Green's TikTok videos, quote-tweeted them, and with comments like "I would reevaluate his employment if I were you," to which Outreach responded indicating that they'd terminated him.

"People can be painted as these mean awful people when really they're just trying to explore new things," says Green. "I was exploring New York for the first time…I didn't know that people do grocery shopping at these corner stores."

"It was more of an intent to almost like make fun of myself for being a new person in the city," he adds.

With other cancel culture incidents, companies fearing public backlash have moved quickly to rid themselves of employees who might tarnish their reputations. This case is no exception: The company posted at 8:25 p.m. on Tuesday that the video had been brought to its attention. By a little after noon the next day, it said it had fired Green. Green, who just signed a 12-month lease and is worried about finances, says he asked HR for an opportunity to explain himself, but they denied his request; they will also withhold the $2,500 relocation bonus that would've come with his first paycheck. 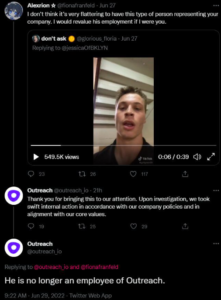 Companies are within their rights to hire and fire whomever they want, and Green was a newly hired recent college grad who'd hardly had time to demonstrate any value to the company. But this kind of corporate wokeness should concern us all. If your out-of-work conduct is on limits to this extent, what types of offenses or pronouncements are fireable? Must workers engage in a constant guessing game? Are software companies in the business of moral adjudication? What types of moral indicators are they looking for, per whose standards?

But companies fear being the mob's target of the week more than they fear hastily punishing innocent people. Consider the case of Emma Sarley, who in fall 2021 was fired from her job at tech company Bevy after allegedly telling a black couple "stay in your hood" after an altercation in a Williamsburg, Brooklyn, dog park. The black couple included Frederick Joseph, a noted internet fame-seeker and yarn-spinning provocateur who had allegedly indicated earlier in the altercation that he'd lived in a posh neighborhood north of Williamsburg, in Queens, which would have made Sarley's comments make more sense. (Note that she was not accused of saying "the hood," but rather "your hood," which seems relevant when attempting to discern racist intent.)

Sarley's case took Bevy CEO Derek Andersen less than 48 hours to rule on. She was quickly fired, just as Green was quickly fired from Outreach. Perhaps this indicates appropriate risk calculation from management. Or perhaps it indicates something more insidious: that our poorly worded jokes or clumsy invectives in moments of frustration can be found by bad actors on the internet, trotted out for all to mock, and assumed to be representative of our character. No mercy, no weighing of our own account of what happened, and certainly no job at the end of the public cross-examination.

"All I ask is for a chance to explain myself," Green wrote in his email to HR asking for a second chance. "This is my dream job and I don't want it to get taken away because of a stupid tik tok video."