Getting a handle on America's massive and growing national debt will only be more difficult if lawmakers keep postponing the effort.

In a report released Thursday, the Congressional Budget Office (CBO) attempted to attach some math to the difficult policy decisions that lie ahead. Regardless of when lawmakers decide to address the $30 trillion national debt, just stabilizing it (that is, implementing policies to stop it from growing relative to the nation's economy as a whole) will require that "income tax receipts or benefit payments change substantially from their currently projected path."

In short, taxes will have to go up and government services—including benefits from programs like Social Security and Medicare, the health insurance program for the elderly—will likely have to be reduced.

That's hardly a new set of prescriptions. Debt-watchers have been warning for years that benefit cuts and tax increases will likely be needed to have any realistic shot at managing America's long-term debt. (And, remember, we're talking about what's needed to merely stabilize the debt, not reduce or eliminate it).

The CBO report charts three prospective courses based on assumptions about when Congress might start implementing necessary changes to face this tsunami of a problem: by 2026, 2031, or 2036.

If policy makers wait until the end of the decade to raise taxes and cut spending, the best-case scenario would leave the debt hovering around 120 percent of GDP over the long term. Waiting longer means higher debt levels forever and more severe consequences.

"As federal borrowing increased, the amount of funds available for private investment would decline (a phenomenon known as crowding out), and interest costs would increase," the CBO warns. "Perpetually rising debt would also increase the likelihood of a fiscal crisis and pose other risks to the U.S. economy." 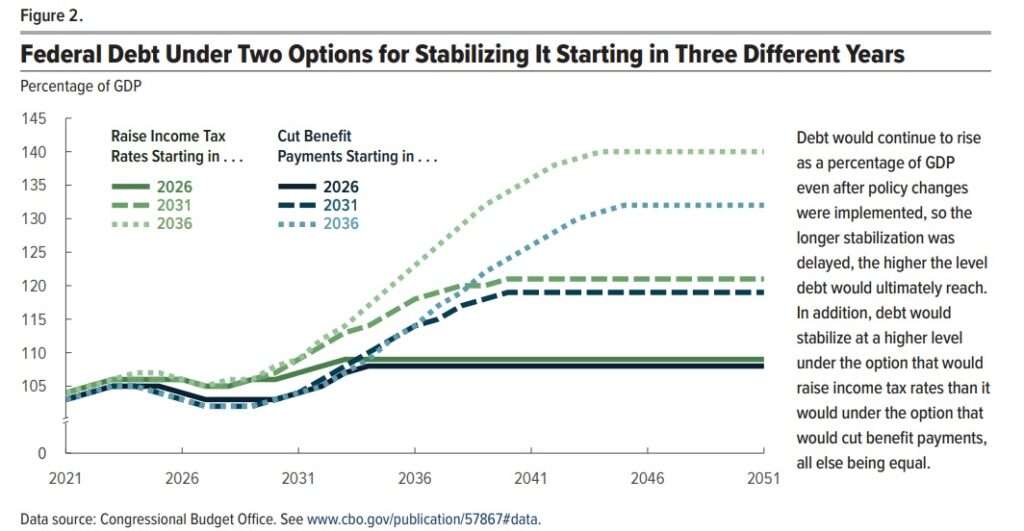 A larger amount of debt translates into reduced economic growth in the long run, as the cost of interest payments on the debt consumes dollars that could otherwise be put to productive use. As the CBO notes, persistently high levels of debt can also put upward pressure on interest rates and make it more difficult to combat inflation.

President Joe Biden has tried to portray his recent budget plan as fiscally responsible because it envisions a trillion-dollar reduction in the federal budget deficit, which the White House touts as the largest ever. But that's only possible because the government is emerging from two years in which the deficit hit previously unimaginable highs due to the fiscal and monetary policy responses to the COVID-19 pandemic. When you put Biden's budget plan into a larger context, it's anything but fiscally sound—even with a planned tax on the wealthiest Americans, it projects a $1 trillion deficit this year and higher deficits in the years to come.

(Remember, the debt is the accumulation of all federal budget deficits. Reducing the deficit from $3 trillion to $1 trillion does not reduce the size of the current national debt—it still adds $1 trillion to it.)

There's little hope that Republicans will do much to stabilize the debt either. Despite comically promising to pay off the debt in eight years, Former President Donald Trump was a spendthrift who jacked up the debt by more, per year, in his four years in office than President Barack Obama did during his eight. Imagine introducing a bill in Congress today to hike taxes and cut entitlement benefits. Which political party would have a target on your back faster?

But for anyone who cares, the future is spelled out pretty clearly in the CBO's new report. The waiting, it turns out, might not be the hardest part—but it sure isn't going to help.