America's national debt exceeded $10 trillion for the first time ever in October 2008.

By mid-September 2017 the national debt had doubled to $20 trillion. That was so recently that it probably feels like the week before last. Remember Donald Trump issuing a threat of nuclear war against North Korea from a New Jersey country club? Did you see Thor: Ragnarok in theaters? That was fall 2017. It was less than five years ago.

The speed with which the federal government has piled up the third mountain of 10 trillion I-O-U notes is truly remarkable. Yes, the response to the COVID-19 pandemic drove government borrowing and spending to stratospheric heights—but even before COVID appeared on the horizon, the operative question about the national debt was when not if the country would hit $30 trillion. The drivers of the debt are an unbalanced entitlement system and a persistent gap between government spending and tax revenue—the result of more than two decades of poor decision making in Washington, where politicians from both parties have carelessly borrowed to pay for everything from foreign wars to $1,200 checks for most Americans (even those earning six-figures) during the pandemic. 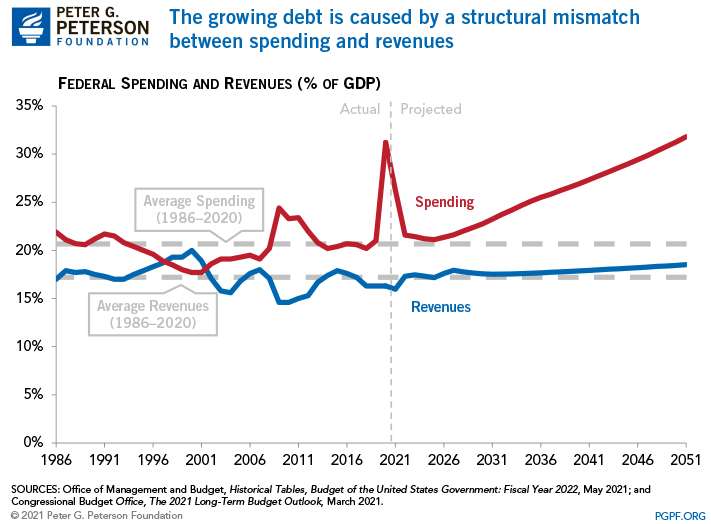 Even if the growing debt doesn't trigger a default or other crisis, it will have a material impact on Americans' futures. Higher levels of debt are correlated with lower levels of future economic growth in no small part because the amount of money that must be siphoned out of the economy to pay the interest on the debt will keep getting larger. Every dollar used to service the debt is a dollar that can't be used to invest in new technology, pay workers, or save for the next rainy day.

Higher levels of debt also make it more difficult for policy makers to combat inflation, which is eroding away at Americans' paychecks and savings faster than at any point in the past 40 years.

The $30 trillion debt is "a jaw-dropping number that is a real cause for concern," Maya MacGuineas, president of the Committee for a Responsible Federal Budget (CRFB), a nonpartisan group that advocates for balancing the budget, tells The Wall Street Journal. "It is the result of both borrowing for really important crises, most notably the Covid pandemic, but also trillions and trillions of borrowing for no reason other than politicians have stopped being willing to pay the bills."

But aside from MacGuineas and her small band of allies, there's little recognition in Washington that the debt is a problem. That's another problem. When the national debt ticked past $10 trillion in 2008, it became a major talking point in that year's presidential campaign. "That's $30,000 for every man, woman, and child," soon-to-be President Barack Obama said during a campaign event in Nebraska that year. "That's irresponsible. That's unpatriotic."

Later, after federal spending exploded during the Great Recession, the Tea Party movement popped up to demand fiscal responsibility from Obama and Congress. The results were mixed—sequestration and temporary budget caps slowed runaway spending even if they didn't reverse it—until the Republican-controlled Congress under President Donald Trump abandoned the effort and jacked up spending.

America has now borrowed an average of $7 billion per day for the past year, according to the CRFB, but the current brand of supposedly conservative populism is driven by culture war conflict, not concern about the unspooling of America's fiscal foundations.

And while neither party is serious about reining in the debt, both are responsible for a pandemic-era spending binge that was entirely financed with the nation's credit card. While some of the $5.3 trillion in emergency pandemic spending was a justifiable response to a once-in-a-generation crisis, much of it was wasted. States received hundreds of billions in budgetary aid and, in many cases, are now running huge surpluses. Direct checks that were supposed to tide over employees whose workplaces were shuttered by COVID also went to people earning six figures while working from home. Every dollar borrowed and spent as part of last year's $1.9 trillion relief bill is estimated to have generated only $0.73 in economic activity. 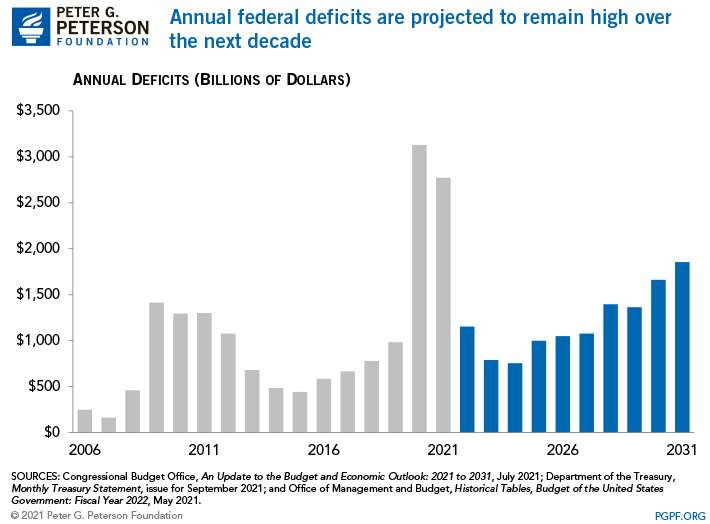 The debt won't stop rising when the pandemic passes. Entitlements like Social Security and Medicare are in dire fiscal straits and will become even more costly as the average American gets older. Even without another unexpected crisis, deficits will exceed $1 trillion annually, which means the debt will continue growing, both in real terms and as a percentage of the economy. The Congressional Budget Office estimates that the federal government will add another $12.2 trillion to the debt by 2031.

Which means that it won't be long before we're looking back at this week and saying that it felt like just yesterday the debt hit the $30 trillion mark.