A federal court has temporarily blocked enforcement of Texas' new "heartbeat law," the controversial statute that bans abortion once fetal cardiac activity can be detected and allows people to sue those whom they think have performed or abetted an abortion. Senate Bill (S.B.) 8—which took effect September 1—has already spawned several lawsuits and an appeal to the Supreme Court to intervene. But SCOTUS held that because of the way the law was written (with enforcement through private lawsuits, not state action), it couldn't do that yet. After that, the U.S. Department of Justice (DOJ) filed suit against the law.

Now, the U.S. District Court for the Western District of Texas has sided with the federal government. In an October 6 ruling, the court rejected Texas' motion to dismiss the case and granted the feds' emergency motion for a temporary restraining order or preliminary injunction. That means S.B. 8 is on hold, pending further legal proceedings.

"From the moment S.B. 8 went into effect, women have been unlawfully prevented from exercising control over their lives in ways that are protected by the Constitution," the district court said. "That other courts may find a way to avoid this conclusion is theirs to decide; this Court will not sanction one more day of this offensive deprivation of such an important right."

From the start, the district court's decision is critical of Texas' actions. "A person's right under the Constitution to choose to obtain an abortion prior to fetal viability is well established," it states. "Fully aware that depriving its citizens of this right by direct state action would be flagrantly unconstitutional, [Texas] contrived an unprecedented and transparent statutory scheme to do just that."

The court rejected many of Texas' arguments for dismissing the suit, including the argument that the federal government didn't have standing to bring it (because it couldn't sufficiently show injury). "Insofar as S.B. 8 impedes the federal government's ability to provide abortion–related services mandated by regulations, statutes, and case law, the United States has met its burden to demonstrate a concrete, particularized, and actual injury," states the court's decision. "By imposing damages liability of $10,000 or more on any person performing, inducing, aiding, or abetting an abortion, S.B. 8 exposes the federal government, its employees, and its contractors to monetary injury."

Furthermore, the court says that "The United States argues that it has a 'profound sovereign interest' in vindicating its citizens [sic] constitutional rights and ensuring those rights 'remain redeemable in federal court.'"

"When, as here, a state appears to deprive individuals of their constitutional rights by adopting a scheme designed to evade federal judicial review, the United States possesses sovereign interest in preventing such a harm," the court continued.

As to whether the feds have a cause of action, the court notes that "S.B. 8 was deliberately crafted to avoid redress through the courts. Yet it is this very unavailability of redress that makes an injunction the proper remedy—indeed, the only remedy for this clear constitutional violation," it says:

No cause of action created by Congress is necessary to sustain the United States' action; rather, traditional principles of equity allow the United States to seek an injunction to protect its sovereign rights, and the fundamental rights of its citizens under the circumstances present here.

The particular features of S.B. 8 burden interstate commerce even beyond the impacts of traditional legislation. By extending liability to persons anywhere in the country, S.B. 8's structure all but ensures that it will implicate commerce across state lines—whether through insurance companies reimbursing Texas abortions, banks processing payments, medical device suppliers outfitting providers, or persons transporting patients to their appointments.

In addition to imposing liability on those coming into Texas, the law has also already had the effect of pushing individuals seeking abortions into other states. This stream of individuals across state lines burdens clinics in nearby states and impedes pregnant individuals in surrounding states from accessing abortions due to backlogs. These harms to interstate commerce are independently sufficient to support the United States' right to sue in this case.

Agents of the Texas government are now barred from enforcing the law, "including accepting or docketing, maintaining, hearing, resolving, awarding damages in, enforcing judgments in, enforcing any administrative penalties in, and administering any lawsuit brought pursuant to [it]."

Twitter has started adding trigger warnings to some discussions. Underneath some tweets appears a "Heads Up" alert that says "Conversations like this can be intense."

So far, the results are…interesting. 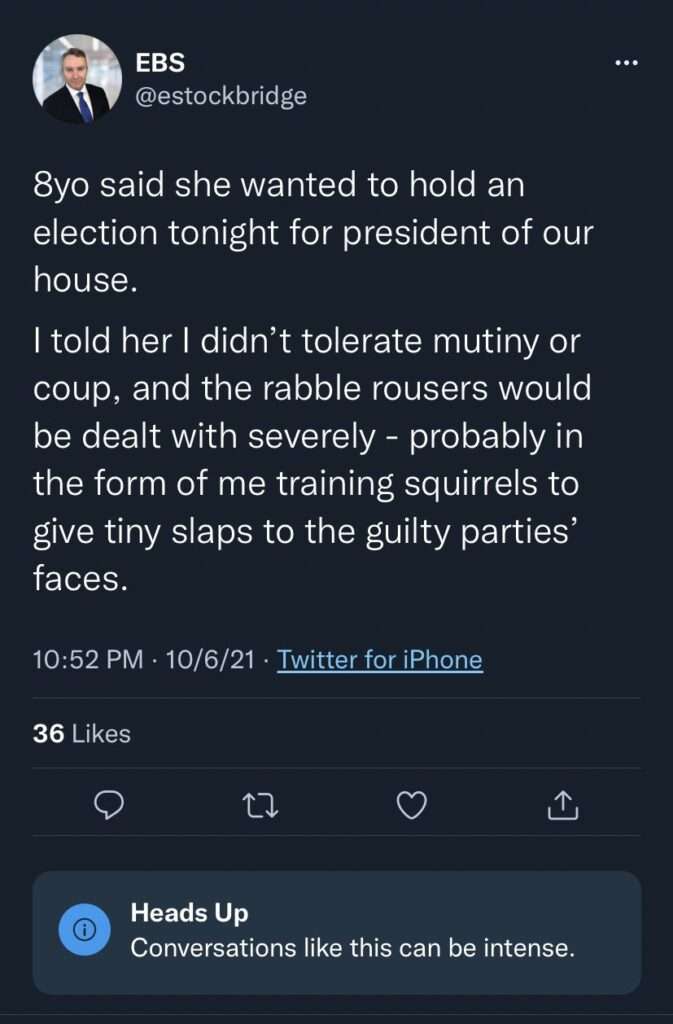 Twitter is testing several new prompts "that warn before you jump into a conversation that could get heated," notes The Verge:

In one example, there's a prompt dropped right into a conversation in progress that says "conversations like this can be intense." In another, which seems like it appears if you try to reply to one of those intense conversations, is titled "let's look out for each other" and lays out three bullet points to encourage empathetic and fact-based conversations.…One other prompt, for example, warns you before you tweet something that might be offensive.

After a decade of litigation & legislative activism, @IJ has finally made it legal for #HomeBakers to sell their goods in ALL 50 STATES!!

THIS is what social change through #ImpactLitigation looks like.

• The government may start defaulting on Social Security payments if Congress doesn't raise the debt ceiling.

If you were born between the 11th and 20th of a month, and the feds default, your Social Security will be the first to be delayed. @alyssafowers on the bizarre and impossible decisions that must be made if the U.S. defaults and the goverment unravelshttps://t.co/83eJLnFikx pic.twitter.com/itSzCw4eud

• The DOJ is launching a new National Cryptocurrency Enforcement Team.

• "The World Health Organization (WHO) announced that it is recommending the approval of the Mosquirix malaria vaccine," Ron Bailey reports.

• The U.S. collected more than $7.6 billion in tariffs in August. "That's an amount that exceeds even the highest single-month total during the Trump administration and one that dwarves monthly tariff revenue from earlier years," notes Eric Boehm.

• New York City Mayor Bill de Blasio may run for state governor. Not everyone on his side is so thrilled. "Osama bin Laden is probably more popular in Suffolk County than Bill de Blasio," Rich Schaffer, chairman of the county's Democratic committee, told The New York Times.