The American appetite for social media censorship is apparently increasing: 48 percent of survey respondents now want the government to restrict misinformation, compared with just 39 percent in 2018.

That's according to recent findings from the Pew Research Center, which asked respondents what should be done about "false information online." The percentage of people who thought the social media companies themselves should curb misinformation has barely changed over the last few years (59 percent today versus 56 percent three years ago), but support for government action jumped 9 points.

That figure—48 percent—is significant. It means, that just about half of all people want the government to violate the First Amendment, which protects the free speech rights of private actors, including tech companies. Free speech can be messy, but the authors of the Bill of Rights believed that the federal government should not have the right to decide what ideas the people are allowed to express. After all, the government might accidentally criminalize true information rather than false information, or nefariously censor criticism of its own actions.

Indeed, this is precisely what has occurred over the course of the pandemic. Federal health bureaucrats and their allies in the White House have repeatedly urged tech platforms to take action against so-called misinformation relating to COVID-19. But over and over again, it has subsequently been the case that the misinformation in question was not quite so clear-cut. For instance, after weeks and weeks of the government's preferred health experts shrieking that the lab leak theory of COVID-19's origins was unthinkable and no one should be allowed to even discuss it, the idea gained enough mainstream traction that social media sites had to revise their policies of censoring the topic.

The government's own health guidance has varied wildly from moment to moment. At the beginning of the pandemic, top White House COVID-19 adviser Anthony Fauci discouraged the use of masks among the general population. Then, for months, masks became an urgent necessity in any and all circumstances. Eventually, health officials relented and said that masks were only necessary indoors. After the vaccine rollout began, Centers for Disease Control and Prevention (CDC) Director Rochelle Walensky said that vaccinated individuals didn't need masks at all. But the CDC's current position is that in many circumstances, masks should be worn regardless of vaccination status.

The constantly shifting expert consensus, as well as the government's own history of issuing confusing and contradictory statements, should make people more reticent to entrust a single entity with the task of determining truth from falsehood. So it's a bit concerning that the American public has grown even hungrier for a central information czar since Pew last conducted this survey.

Note that the increasing appetite for censorship is mostly a reflection of increasing openness toward government action on the part of Democrats. While Republicans have grown even less willing to let either governments or the tech companies themselves restrict misinformation, Democrats have moved dramatically away from a robust defense of the First Amendment. 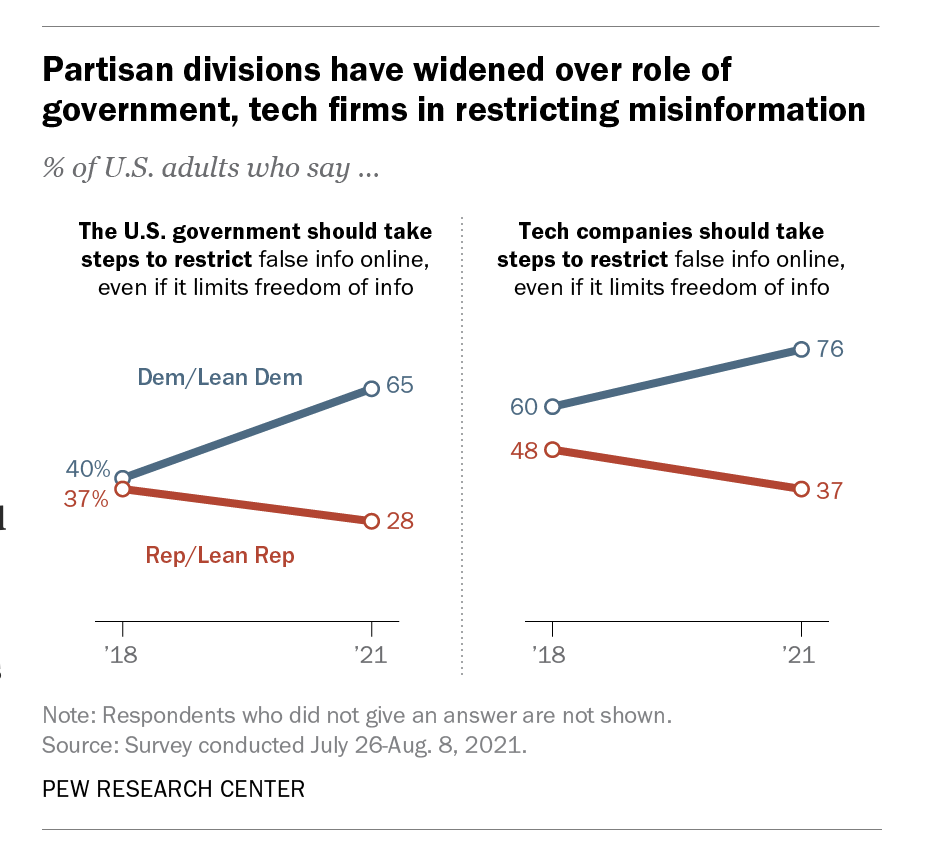 Pew also notes that the demographic differences pertaining to this question have largely disappeared.

"Three years ago, older Americans and those with less education were more likely than younger and more educated adults, respectively, to say the U.S. government should take steps to restrict false information online, even if means limiting some freedoms," write the survey's authors. "Now, Americans across nearly all age groups are fairly evenly divided between the two views. Similar changes have occurred when it comes to Americans' educational background."