Several new polls suggest the American people haven't exactly warmed to Vice President Kamala Harris. Her unfavorable rating in an Economist/YouGov poll conducted July 24–27 was 48 percent, while just 43 percent viewed her favorably. And, among the youngest voters, nearly a quarter had no opinion of her at all.

And a poll of Californians—conducted by the Berkeley Institute of Governmental Studies and the Los Angeles Times—found people's views of Harris have "slid over the last three months," as the Times notes. While 49 percent said they approved of her performance as vice president so far, this represents a drop of four percentage points. Meanwhile, 38 percent disapproved, up five percentage points from the last poll three months ago.

"Her small lag behind Biden's numbers shows that, even in her native California, Harris is a slightly more polarizing figure than the president," the Times points out.

According to RealClearPolitics, an average of polls gives Harris a 51 percent approval rating and a 43 percent disapproval rating.

A survey last week from Trafalgar Group found 63.6 percent of surveyed voters were not confident that Harris is ready to be president. 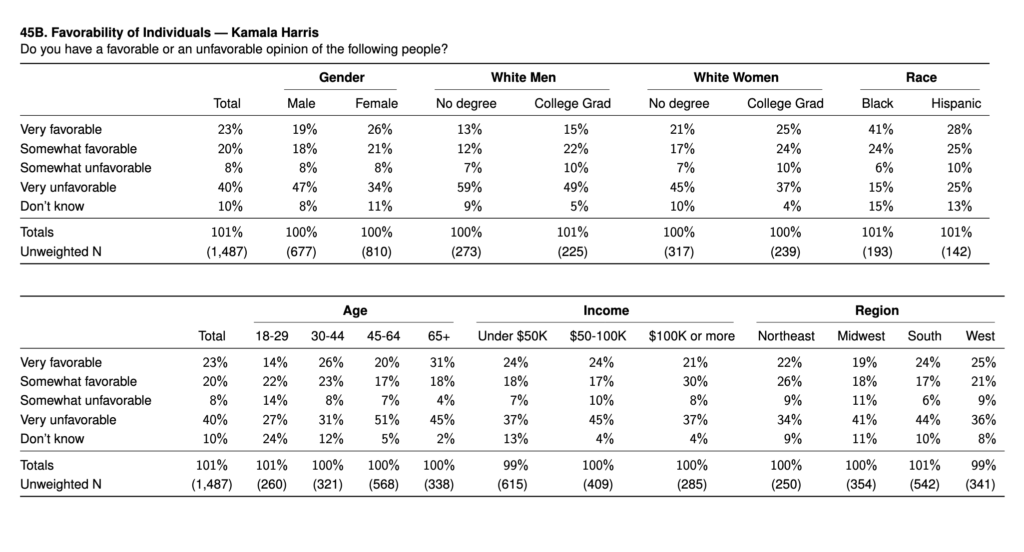 "Perhaps the worst-kept secret in Washington is that tons of Democrats are terrified of the prospect of Kamala Harris becoming the Democratic Party presidential nominee at some point in the future," writes Matthew Yglesias, Vox co-founder.

While personally "not that scared of her current approval numbers," Yglesias is scared by dismissiveness about these numbers. "The reaction that you hear from the Harrisverse to these worries…is mostly to accuse critics of sexism or to attribute her political problems to sexism," notes Yglesias.

Indeed, just typing this paragraph I can feel the people getting ready to yell at me on Twitter. But my point isn't to deny that sexism is real (it clearly is) or that it's felt by women in politics (it clearly is) but that this kind of fatalism is paralyzing and politically deadly. There are women in politics who are popular and successful at winning tough races, and they didn't do it by making sexism vanish from the planet earth any more than Barack Obama and Raphael Warnock ended racism.

In other words, sexism in politics is real, but it's not Harris' core problem. And as long as she, her staff, or her fans insist on pretending that's the only reason people don't like her, it puts her at a political disadvantage. (Not that that's a bad thing…)

If Harris wants to be popular—and be president someday—she needs to "stop acting like her job is to win the support of the young, highly educated urban activists and progressive donors who play an outsized role in California and national Democratic politics. They already love her," writes Damon Linker at The Week.

Instead, she should aim to win moderate swing voters by tailoring her public statements to appeal to an imagined 50-something white person without a college degree who lives in the suburbs of a mid-sized and decidedly unhip Midwestern city (like Grand Rapids, Michigan). In concrete terms, this would mean responding to a question about whether the United States is a racist country by expressing the kind of hokey patriotism that comes second nature to Biden. Just say, "America is the greatest country in the world," and leave it at that.

Fortunately for us, it seems unlikely that Harris will be willing to do that. As Linker notes, "so many Democrats from her faction of the party would view such efforts as a moral betrayal." And Harris, in her current iteration, has made appealing to this faction her top priority. Then again, Harris' history in politics is nothing if not a story about being willing to be whoever voters want her to be for a given moment. She's shape-shifted before, and she could do it again.

Behind the CDC mask guidance. This week, the Centers for Disease Control and Prevention (CDC) once again said that some vaccinated people should wear masks inside. In making the announcement, CDC Director Rochelle Walensky nodded to data showing that—contrary to previous evidence—vaccinated people may indeed be able to spread COVID-19. But that evidence is unpublished, leaving a lot of questions about what it actually shows. Reason's Jacob Sullum explores what we know here.

One data point may be an outbreak in Provincetown, Massachusetts. "All indications now are that the Provincetown outbreak investigation is among the pieces of new evidence behind the CDC's decision to ask Americans to once again put on their masks indoors, even if they are vaccinated," reports ABC News. "As of Thursday, 882 people were tied to the Provincetown outbreak. Among those living in Massachusetts, 74% of them were fully immunized, yet officials said the vast majority were also reporting symptoms. Seven people were reported hospitalized."

How representative Provincetown over July 4 weekend may be is up for debate:

If the CDC is heavily relying on the Provincetown outbreak to understand Delta, I am wary. It's hard to imagine a more efficient environment for spreading an airborne virus than bars in Provincetown on July 4. https://t.co/POwzEUDdiQ

Mask mandates return. The new CDC guidance and fears about the delta variant are driving some areas to bring back indoor mask mandates. In Washington, D.C., Mayor Muriel Bowser announced Thursday that anyone over 2 years old must mask up indoors.

"Due to the continued day-over-day case rate increases of COVID-19 from the highly infectious Delta variant, the Sacramento County Public Health Officer has issued a health order requiring masking indoors regardless of vaccination status," the county announced yesterday.

But leaders in a number of other areas—including Florida, Iowa, Ohio, Michigan, and New Hampshire—have explicitly rejected reimposing mask mandates.

• We should take the delta variant seriously, but not panic—a thread:

Leaked CDC slides on delta variant got you concerned?

Delta variant is a problem

And nearly all hospitalizations, deaths

• "I do not support a bill that costs $3.5 trillion," said Sen. Kyrsten Sinema (D–Ariz.) about the Democrats' spending proposal.