In July, with the country battling a deadly pandemic and the economy staggered by a combination of high unemployment, government-imposed lockdowns, and rising debt levels, then-Senate Minority Leader Chuck Schumer (D–N.Y.) outlined his biggest priorities for Democrats if they were able to take control of Congress.

Right at the top of the list? Cutting taxes for wealthy Americans in high-tax states like his own.

"I want to tell you this: If I become majority leader, one of the first things I will do is we will eliminate it forever," Schumer said during a July 14 press conference on Long Island. "It will be dead, gone, and buried."

"It" in this case was the cap on the state and local tax (SALT) deduction, which was imposed as part of the 2017 federal tax reform bill passed by Republicans and signed by President Donald Trump. As a result of that law, Americans are allowed to deduct a maximum of $10,000 in state and local tax payments from their federally taxable income; previously the deduction was uncapped, and it overwhelmingly benefitted the richest households while shifting their federal tax burden to everyone else. 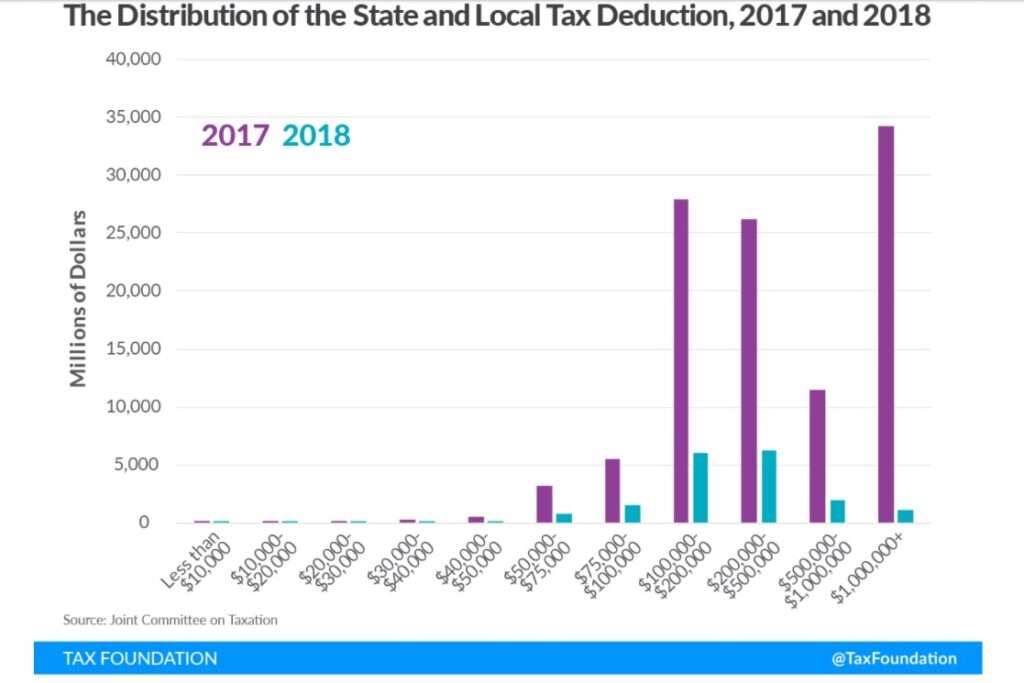 Unsurprisingly, that's why repealing the cap has become a major priority for Schumer and Speaker of the House Nancy Pelosi (D–Calif.), whose constituents stand to benefit more than most Americans. Now, Democratic support for repealing the SALT cap could complicate the passage of President Joe Biden's $2.25 trillion infrastructure plan, as some members of Congress have vowed not to vote for the infrastructure bill unless it repeals the cap.

Special tax breaks for the wealthy, it turns out, are infrastructure too!

Sen. Bernie Sanders (I–Vt.) is correct to point out, as he did in an interview with Axios this week, that the SALT cap creates a serious optics problem for Democrats. Sanders says he will oppose Schumer's effort to attach the SALT cap repeal to the transportation bill because "it sends a terrible, terrible message when you have Republicans telling us that this is a tax break for the rich."

To be clear, it is not just Republicans saying that. Richard V. Reeves and Christopher Pulliam, a senior fellow and research analyst, respectively, at the Brookings Institution, calculated last year that 96 percent of the benefits of a SALT cap repeal would go to the top 20 percent of earners, with the top 1 percent getting 57 percent of the benefits. In a September op-ed for The New York Times, the pair wrote that "in isolation, this change would be more skewed to the rich than" the 2017 tax reform bill that Democrats have spent years decrying as an unfair giveaway to the wealthiest Americans.

Spending enough money on campaign ads can fix even the most inconsistent messaging problems, of course. But the SALT cap debate also presents a major policy problem for Democrats that's likely to be more difficult to solve.

At its core, Biden's policy agenda amounts to a promise that the government will take on a larger role in just about every aspect of ordinary Americans' lives, helping pay for everything from child care to in-home assistance for the elderly via expanded tax credits, direct subsidies, and an expanded role for Medicare and Medicaid.

All of this, Biden explained in last week's joint address to Congress, will be financed by higher taxes on the rich. "We can do it without increasing the deficits," he said in touting his American Families Plan. Instead, the rich will be expected to pay more. Specifically, Biden has proposed raising the top income tax rate to 39.6 percent from 37 percent, along with hiking taxes on capital gains so they are taxed more like ordinary income.

"When you hear someone say that they don't want to raise taxes on the wealthiest 1 percent or corporate America, ask them: 'Whose taxes you want to raise instead?'" Biden said.

Regardless of whether Biden's scheme to hike taxes and grow government has merit, this means Democratic support for repealing the SALT cap isn't just an intellectual inconsistency or an awkward messaging problem. It's a fundamental misalignment of the basics of the party's agenda. A more expensive government that provides benefits to more people, the argument goes, must be financed by those who can most afford to pay—but only after we hand them a giant tax cut? Repealing the SALT cap would add roughly $500 billion to the deficit. Whose taxes do you want to raise instead to close that gap?

In short, Democrats can be the party that demands wealthy Americans pay higher taxes or they can be the party that favors the SALT cap repeal. Trying to be both requires more than just serious mental gymnastics. It probably means sacrificing a significant portion of Biden's agenda to pay off political allies in New York and California.