Meanwhile, congressional Democrats are set to vote this week to restore a huge tax break that primarily benefits wealthy Americans—one that effectively shifts the federal tax burden onto middle- and lower-income earners.

That tax break is known as the State and Local Tax (SALT) deduction and it does exactly what the name would suggest. Taxpayers are allowed to deduct payments of state and local income and property taxes from their federal taxes. (In states with no income tax, taxpayers can deduct sales taxes instead.)

The 2017 federal tax reform capped that deduction at $10,000. That means taxpayers who pay more than that amount in state and local taxes cannot write off amounts over that threshold.

But the House is expected to vote this week on a Democratic proposal to lift the SALT cap to $20,000 for 2019 and then repeal the cap entirely for 2020 and 2021. After 2021, the $10,000 cap would again apply—although it is already scheduled to disappear after 2025, when several big elements of the 2017 tax reform will sunset. The bill proposes to offset the SALT deduction changes by raising the top income tax rate from 37 percent to 39.6 percent until 2025.

Democrats are trying to sell the repeal of the SALT caps as a middle-class tax break, but historical evidence shows that it almost exclusively benefits high-earning homeowners who live in parts of the country where you must pay high taxes. 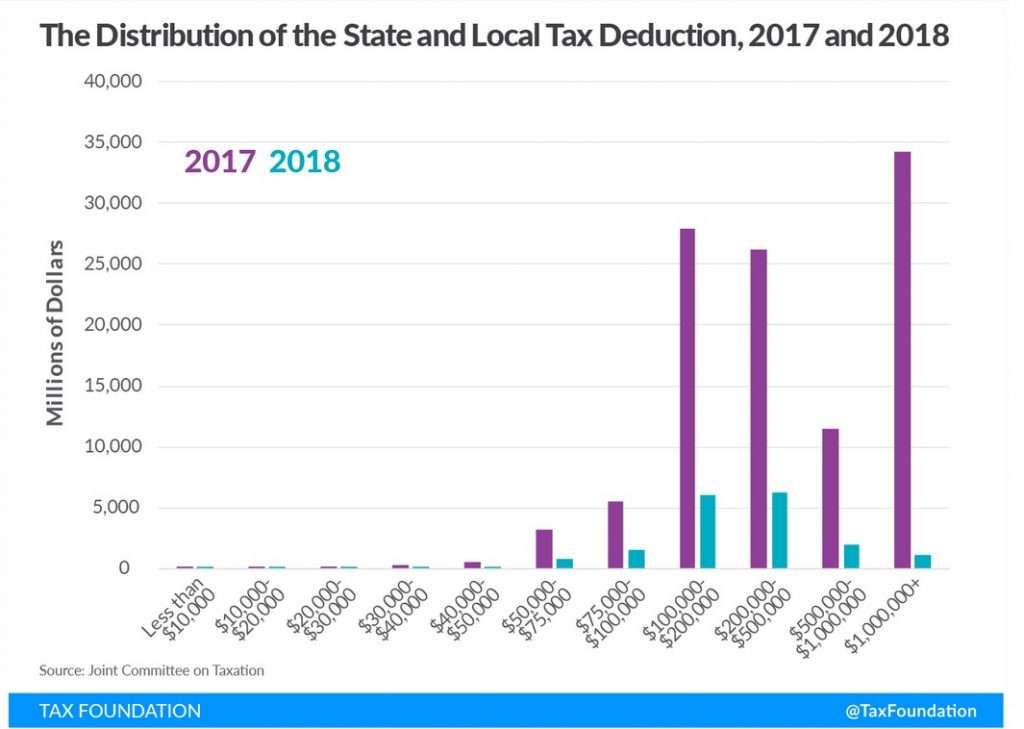 "Jurisdictions with higher-income residents received more of a benefit than those with lower-income residents," Nicole Kaeding, then a vice president at the Tax Foundation, a nonpartisan tax policy center, explained to the House Ways and Means Committee at a hearing earlier this year. "In some ways, it allowed high-tax states and localities to export their tax liabilities to taxpayers in other states, particularly low-tax, low-income states."

Prior to the 2017 tax reform, every dollar of additional local and state taxes translated into a net tax increase of only $0.60 to $0.90, depending on an individual's federal marginal income tax rate.

Although the SALT deduction is frequently portrayed as being an issue that pits red states against blue states, Kaeding says that's not really accurate. In reality, the deduction benefits "high-income taxpayers in high-tax jurisdictions," she says.

Restoring the SALT deduction would also add to the federal deficit, by perhaps as much as $500 billion, says Marc Goldwein, a senior vice president at the Committee for a Responsible Federal Budget, a nonprofit that advocates for balanced budgets.

Reducing Americans' tax obligations is always welcome, of course, but the plan to lift and repeal the SALT deduction cap is still questionable policy at best—a proposal that shifts the tax burden to middle- and lower-class Americans and adds to the budget deficit.

Politically, this week's House vote is potentially both a messaging and policy problem for Democrats.

Leading progressive presidential contenders like Sen. Elizabeth Warren (D–Mass.) are promising to hike taxes on the wealthy by as much as $26 trillion. Even perceived centrist candidates like former Vice President Joe Biden have outlined plans to shift the tax burden toward higher earners.

True, the mechanisms they would use differ from the tax policies included in the SALT bill before the House. But there is an obvious tension between a guiding principle that says the rich must pay a higher share of the overall tax burden and support for specific legislation that would reduce the taxes paid by the rich. On that point, Democrats seem confused right now.

The obvious answer is that this tax break overwhelmingly benefits residents of Democratic districts. An analysis by the Urban-Brookings Tax Policy Center found that 19 of the top 20 districts, ranked by the percentage of households claiming a SALT deduction in 2016, are represented by Democrats in Congress.

Passing this bill, then, is an indicator that Democrats know perfectly well that their own constituents like paying less in taxes, regardless of the campaign rhetoric.