Steel prices are surging and American manufacturing is paying the price—literally, thanks in part to the ongoing consequences of former President Donald Trump's tariffs, which President Joe Biden has not removed.

On Thursday, more than 300 manufacturing businesses sent a letter to the White House urging Biden to repeal Trump's tariffs, which the signatories say have contributed to supply shortages, long lead times, and artificially high prices for key inputs made of steel and aluminum.

"It is businesses manufacturing in America such as ours who pay the tariffs on imports, and it is our businesses and employees who suffer when our product cannot compete with overseas manufacturers because the U.S. is an island of high steel and aluminum prices," reads the letter, in part. The manufacturers say that they are forced to pay prices as much as 40 percent higher for some steel products than overseas competitors, an "unsustainable situation for any U.S. employer."

According to SteelBenchmarker, an industry publication, one metric tonne of American-made hot-rolled band steel is now priced at over $1,500. That's nearly three times more expensive than it was at this same time last year.

While the economic recovery has caused sharp increases in the price of steel made in China and Europe as well, the real problem for American manufacturers is that prices for American-made steel are running well ahead of the rest of the world. In other words, there is likely more than just surging demand and slow-to-recover supply driving the sudden hike in American steel prices. Tariffs are almost certainly part of the explanation. 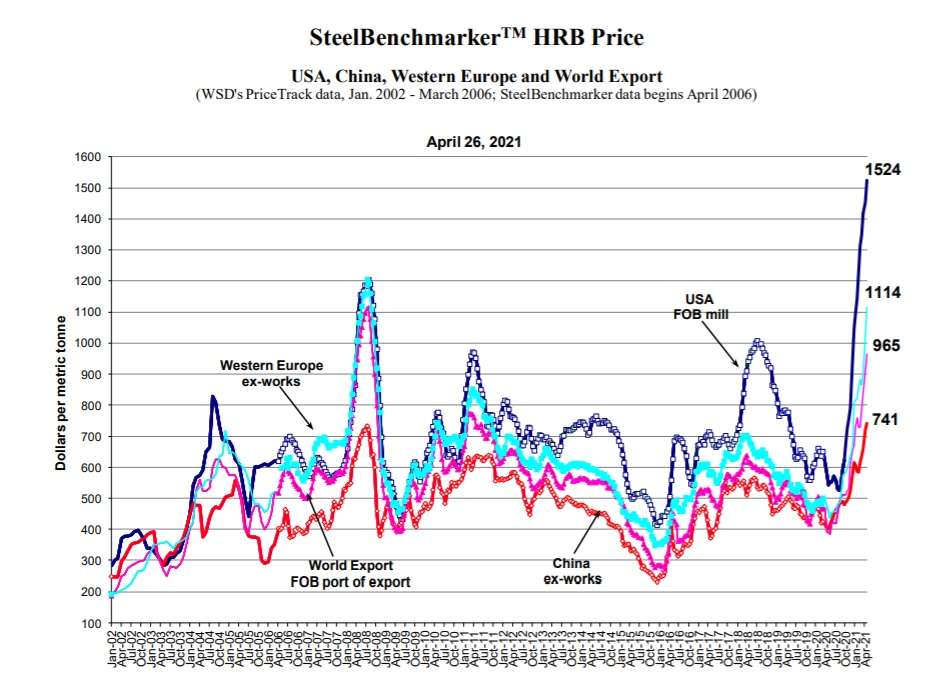 For American manufacturers that require raw steel inputs to make anything from cars to kitchen appliances, that's a problem. Buying foreign steel meaning saving some money, but then owing a 25 percent tax to the federal government—because tariffs are really just taxes.

The goal of Trump's tariffs was to increase the competitiveness of American-made steel relative to the rest of the world, but that does not appear to have happened. Instead, American steelmakers have simply been able to raise prices even faster because they are protected from competition.

And while higher domestic steel prices could, in theory, nudge American steelmakers to invest in expanding plants and hiring more workers, that doesn't seem to have happened either. Even amid surging prices, U.S. Steel announced this week that it was canceling plans for a $1 billion expansion of one of its major steel plants in Pennsylvania—an expansion Trump had touted as evidence that his tariffs were working. Bank of America, meanwhile, is warning that high steel prices are likely a "bubble" that will soon burst, rather than a stable long-term situation that would encourage steelmakers to invest in more capacity.

The manufacturers petitioning the White House for relief say it takes up to 20 weeks for some orders to be filled—three to five times longer than the four-to-six-week wait that was typical before the tariffs.

"We support a strong and thriving steel and aluminum industry," the manufacturers told the White House in their letter, "but producers today simply cannot meet demand and the tariffs create a tax that only manufacturers in the U.S. must pay."

The Biden administration has waffled between defending Trump's tariffs as "effective"—which they are clearly not—and promising to be more discerning about how it uses (or abuses) the executive trade powers Trump stretched to new limits.

Neither approach offers much relief for American manufacturers that have been caught in the middle of misguided federal trade policies for over three years. Biden should set aside politics for a moment and listen to what they have to say.