For the first time, a majority of Republicans support marriage equality for gay and lesbian couples, according to a new poll from the Public Religion Research Institute (PRRI). The PRRI poll—conducted throughout 2020—finds U.S. support for same-sex marriage now stands at 67 percent, up from 61 percent in 2017 and 36 percent in 2007. Much of the recent rise can be attributed to growing support by conservatives and independents.

In 2020, 51 percent of the Republicans polled by PRRI said they support granting legal marriage rights to same-sex couples. This is up from 47 percent in 2019 and 31 percent in 2011.

Support has also increased among people identifying as politically independent: 72 percent in 2020, up several percentage points from 2019 and up from 47 percent in 2011. 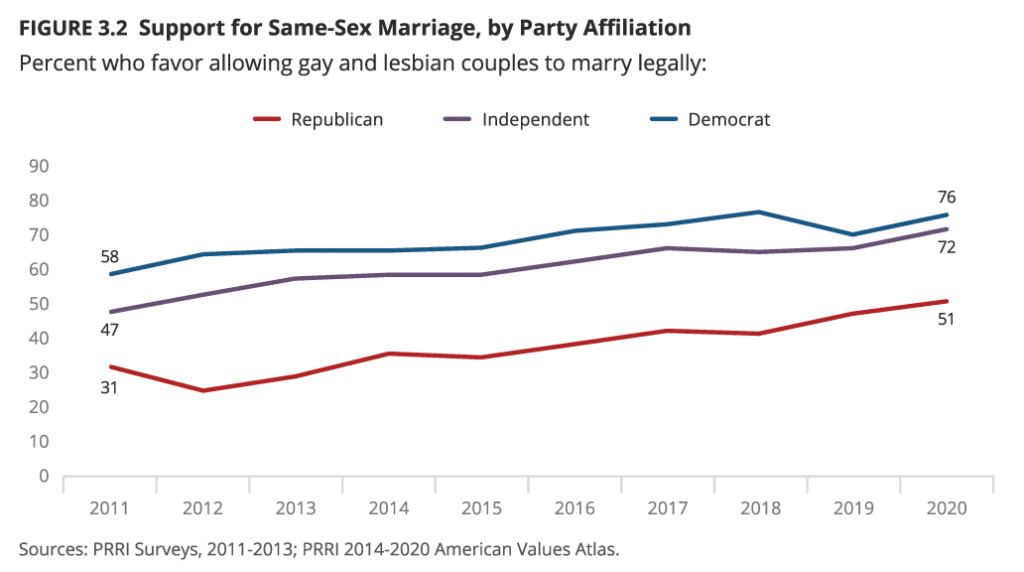 The latest poll results are based on telephone interviews with more than 10,000 Americans conducted throughout 2020; the margin of error is plus or minus 1.1 percentage point.

A federal appeals court is considering the constitutionality of surveillance cameras installed outside people's homes. From Courthouse News:

Can police install a secret video camera outside someone's home and record everything that happens there for eight months? The First Circuit seemed dubious during oral argument Tuesday, but the judges also struggled to figure out where to draw the line as to when police need a warrant for their high-tech surveillance.

"Wouldn't many of us feel insecure if we suddenly found out a camera was recording everything that happened in the curtilage of our house?" asked U.S. Circuit Judge William Kayatta.

"That would make me feel insecure," the Obama appointee said. "Why wouldn't most people feel that way?"

U.S. Circuit Judge O. Rogeriee Thompson, a fellow Obama appointee, complained that the government was arguing that its right to spy on people "should be limitless."

"Are we just going to put these cameras in front of everybody's house and monitor them and see if anybody's up to anything?" she asked.

But Cox went ahead and signed another piece of unconstitutional legislation, this one requiring all phones sold in Utah to come with porn-blocking filters pre-installed. "Cox has said the measure would send an 'important message' about preventing children from accessing explicit online content," the Associated Press reports:

The measure won't go into effect unless five other states enact similar laws, a provision that was added to address concerns that it would be difficult to implement.

The American Civil Liberties Union of Utah said the constitutionality of the bill was not adequately considered and that it will likely be argued in court.

"This is another example of the Legislature dodging the constitutional impacts of the legislation they pass," ACLU attorney Jason Groth said.

NYPD Commissioners Cleared Cops Found Guilty of Everything From Chokeholds to Pushing Man Into Traffic. https://t.co/28OZun3rR5

• Sex trafficking panic and victim blaming follow in the wake of the Atlanta massage parlor murders.

"Those in elected office only paint social media in two colors: They are either a tool that silences viewpoints, or complicit in the spread of harmful, dangerous content." https://t.co/JgFcqImikV @jeffreywestling

• School choice is most likely coming to West Virginia.

• Arkansas is attempting to mandate the singing of "The Star-Spangled Banner" at public school sporting events.

Didn't we already go through this 80 years ago when the Supreme Court explained that you can't compel speech? I mean, that was about the pledge of allegiance in schools, rather than the anthem, but, y'know, same thing: https://t.co/TU9zXpUDWZ https://t.co/5JTQTzYPTR