No, the COVID bill won't end poverty or "snuff out the pandemic." With a $1.9 trillion spending package passed by the Senate over the weekend—bringing (among many other things) a round of $1,400 stimulus checks to most Americans—right-leaning media outlets have been taking heat for focusing on the royal family, on New York Gov. Andrew Cuomo's creepiness, on China, on random outrage bait… basically, anything else. You can see it on their front pages yesterday afternoon and again this morning. Since there's a lot to criticize in the recent spending package, it's strange that instead of taking this opportunity to actually engage in a little conservative analysis, conservative media outlets would rather serve up fluff and manufactured scandals. But whatever—these are explicitly ideological publications, and I have a hard time getting worked up about how they choose to spin.

Much more disturbing is fawning coverage of the COVID-19 relief bill from ostensibly neutral news outlets.

The bill does a whole lot more than extend federal unemployment benefits and send Americans money, and only about 5 percent of the spending is actually going toward pandemic-related public health efforts, according to the nonpartisan Committee for a Responsible Federal Budget (CRFB). But you wouldn't know this from reading most mainstream coverage, which merely describes the coronavirus relief parts in glowingly positive terms and gives Biden credit for all of it. 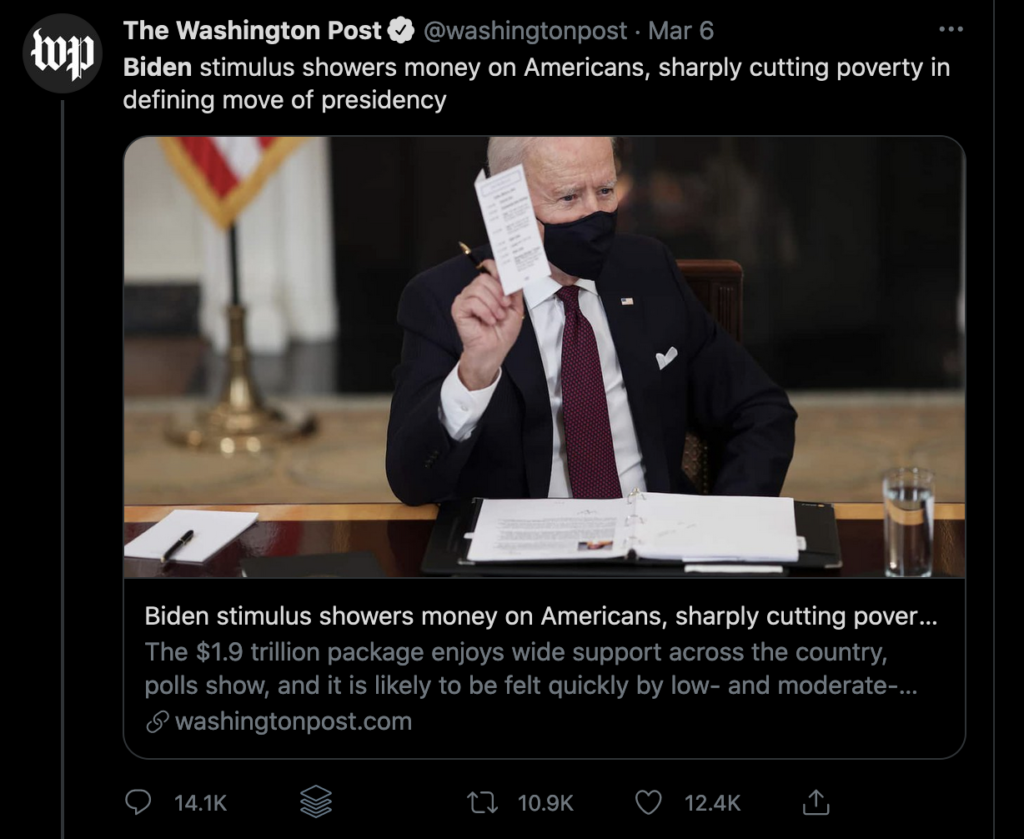 The Washington Post headline and tweet about the bill passing read more like propaganda from an authoritarian country than the kind of thing we should be seeing in a free press, saying that the bill "showers money on Americans, sharply cutting poverty in defining move of presidency."

While previous rounds of stimulus checks were treated as a nice but stopgap gesture ("The $1,200 stimulus checks are arriving. People are mostly spending them on food"), this time sending American families one-time payments will sharply cut poverty?

Not to be outdone, Bloomberg credits the spending package with having the ability to "snuff out the pandemic" entirely.

Bloomberg also lauds Biden's "quiet style" that "belies a deep agenda for reshaping the U.S." One might expect Bloomberg to at least lay out some pros and cons of reshaping the country, but the article presents Biden proposals exactly as they're described in Democratic press releases. It offers no hint of awareness that the Biden administration saying something targets (insert bad thing here) doesn't always mean it lives up to the hype. It touts the number of executive orders Biden has signed without detailing the content of those orders, without mentioning that former President Donald Trump took a lot of flack for wielding executive power in this way, and without questioning whether executive governance by fiat is really the best thing. The only thing the article really faults Biden for is not reshaping the country more quickly.

In a piece purporting to be a simple explainer about what the COVID-19 package will do, The New York Times celebrates "President Biden's $1.9 trillion economic stimulus plan" for the $1,400 checks, unemployment benefits extension, child tax credit, Affordable Care Act subsidies, and sending money to local governments and schools. It faults the package only for not including a federal minimum wage hike.

The Times explainer does not note that state and local governments are actually doing pretty well during the pandemic and don't need a federal cash infusion. It does not note that most of the money for schools won't actually go toward helping them reopen. (As Reason's Eric Boehm notes, "the bill spends $129 billion on K-12 education" but most of it won't be distributed until after 2021 and some not until 2024.)

It does not say anything about the massive tax hike on businesses like Airbnb and Etsy, nor the new privacy concerns it will raise for people who use these websites.

It does not mention the massive bailout for failing pensions (that's tucked away in a separate article on the Times business page), nor note that roughly 95 percent of the spending has nothing to do with public health and the pandemic.

"Tucked inside the $1.9 trillion stimulus bill that cleared the Senate on Saturday is an $86 billion aid package that has nothing to do with the pandemic."

Virginia vote on Equal Rights Amendment (ERA) doesn't count, says judge. A group of Democratic attorneys general sued to try and force the feds to recognize Virginia's vote to ratify the ERA, even though the deadline for ratification came and went decades ago. From the Associated Press:

The lawsuit dismissed by a federal judge Friday sought to add the amendment to the Constitution.

After Virginia became the 38th to ratify the amendment that supporters say will guarantee women equal rights under the law, the archivist of the United States declared he would take no step to certify the amendment's adoption….

South Carolina considers making it easier for women to buy birth control. "A bill that would allow pharmacists to directly give birth control to women in South Carolina without a prescription is heading to the Senate floor," reports A.P.

Senators said they expect to discuss a few changes to the bill on the floor, including whether pharmacists will be required to discuss birth control directly with women before handing it over or if the information can be in written form.

Like most shorthands, "woke" and "antiWoke" are flawed and we should instead talk about the valuable projects of being anti-censorship and anti-authoritarian. https://t.co/kvgrBxnjBG

• Biden is gearing up to roll back Trump administration changes to Title IX (the law governing campus sex discrimination and rape) that Education Secretary Betsy DeVos put in place to help ensure some due process for those accused. He's also creating a Gender Policy Council.

• Steve Chapman on why decriminalizing prostitution is an idea whose time has come.

• Gun background check bills are coming to Congress once again.

• Switzerland now mandates covering your face in public…but not too much of it.