Recent legislative efforts should serve as a reminder that the most dangerous threat to Americans' free speech isn't tech executives in California––it's the people we elect and send to Washington.

The most recent threat to free speech to emerge from Congress is H.R. 1, a colossal 900-page bill. It passed in a 220-210 vote on Wednesday, with one Democrat joining all Republicans to vote against. The legislation tackles a host of questions involving campaign finance, political speech, and online speech, and its effects would all but silence citizens' abilities to speak about and criticize politicians and their policies. In fact, the 40 pages of the bill borrowed from the "Honest Ads Act" would censor more online political speech than anything those working in Big Tech have dreamed up.

Among the host of new requirements contained in the legislation is government-compelled speech on paid political content or content created by paid employees. Essentially, traditional online ads, or even memes, would require lengthy text disclosing what organization created the ad. These disclosures would have to include the sponsor's name and give a means for the viewer to find the sponsor's street address, telephone number, and website URL, and say that the ad is not authorized by any candidate or candidate's committee.

Imagine seeing a policy-related meme with a large government-mandated disclaimer slapped on it, wrecking your view. 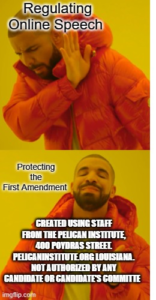 These requirements would not just apply to graphic formats but to audio and video content as well. For example, H.R. 1 applies the government-mandated disclaimer for radio ads to online audio ads, such as podcast ads or free music streaming apps. These disclaimers often last from 10–15 seconds, and H.R. 1 makes the disclaimers even longer. For context, many online ads on services like Spotify or YouTube usually last only 10–15 seconds. The results would either be longer online ads filled with government speech that consumers would skip through or political advertisers foregoing speech through digital video ads altogether.

As burdensome as these requirements are for those wanting to broadcast a message, those hosting the message might face even more daunting requirements.

The legislation would require a "public file," which is a database of all ads costing over $500 that are run by a particular digital ad provider. While such systems have been implemented privately by Google and Facebook, companies with fewer resources would be unable to create systems that comply with the law. Look no further than when state versions of the bill were passed and digital advertisers like newspapers attempted to meet the onerous requirements.

When Maryland passed a state version of the "Honest Ads Act," newspapers filed a lawsuit explaining that these requirements were not only impossible to comply with, but were unconstitutional as well. The courts agreed.

Sometimes, even big companies struggle to comply. Washington state's own version of the act was so onerous that Google stopped running political ads within the state altogether. Even after creating an online ad database, the company was sued by the Washington attorney general for noncompliance. While Congress continues to rail against the power of Big Tech, these rules would be impractical for any small companies to comply with, leaving potentially only the largest and most profitable companies to run political ads.

Beyond the technical obligations and constitutional issues, the requirement that citizens hand over a large amount of personal information in order to speak their politics could have a chilling effect on free speech. Requiring this information impedes the ability of an individual or group to speak anonymously, an important value both in our nation's history and in virtual channels. The reporting requirement is also a barrier to entry for those wanting to spend a tiny amount on advertisements. As any group dealing with the Facebook process can attest, making it through the labyrinth of verification of personal information, disclaimer review, and ad review often can prevent a small group from speaking. Imagine if an ad on any platform had to meet similar requirements. Small groups without paid professionals may be completely discouraged from tackling the process.

The Honest Ads Act provisions of H.R. 1 would, by themselves, be a major blow to free speech, and that's without taking into account roughly 850 pages' worth of other bad ideas.

But of course, silencing speech is the point of the bill. During a hearing of the DISCLOSE Act, part of the larger, 900-page H.R. 1 bill, Senate Majority Leader Chuck Schumer (D–N.Y.) said, "Let me tell you, I think it's a good thing when somebody is trying to influence government for their purposes, directly with ads and everything else, it's good to have a deterrent effect."

One of the most effective ways to speak about policies or politics is online. For just a few dollars, you can use any number of tools to put your speech in front of people likely to engage with or be interested in the issues you care about. With a persuasive enough message, you can recruit other people to join you in criticizing an elected official, shining a light on politicians' shortcomings.

This, of course, is unpopular with the Washington political class. They enjoy holding the reins of political discourse, so attention is focused on the issues and topics they care about. Rules on speech are designed to protect insiders and disadvantage outsiders. The internet is the ultimate tool for outsiders and, thus, must be curtailed.

Many decisions made by large tech companies have raised questions about their commitment to free speech and free expression on their platforms. But at least with a market in social media, consumers can vote with their feet and choose platforms that respect their speech. A government-mandated speech policy creates a monopoly on censorship.

The bill faces a Senate hearing on March 24. As lawmakers debate its merits, they would do well to remember that the First Amendment reads, "Congress shall make no law."