President Barack Obama pledged at the Copenhagen climate conference back in 2009 to cut U.S. greenhouse gas emissions by 17 percent by the year 2020. Guess what? We more than did it.

At that 2009 meeting, then-Secretary of State John Kerry assured the conference delegates that the U.S. would likely reduce its green house gas (GHG) emissions even more because in the coming years it would be so easy and cheap to cut them that "every country that has put a reductions target out there will exceed their targets." (President-elect Joe Biden has selected Kerry to serve as a special envoy for climate, giving him a seat on the National Security Council.)

While it is true the cost of electricity from wind and solar power are falling, the bulk of U.S. emissions reductions between 2009 and 2019 stemmed from electric power generators switching from coal to natural gas. In a new report, the Rhodium Group consultancy estimates that as the result of the COVID-19 economic shock U.S. greenhouse gas emissions fell this year by 10.3 percent. "This puts US GHG emissions below 1990 levels for the first time," notes the report. "With emissions down 21% below 2005 levels, this means the US is expected to far exceed its 2020 Copenhagen Accord target of a 17% reduction below 2005 levels." 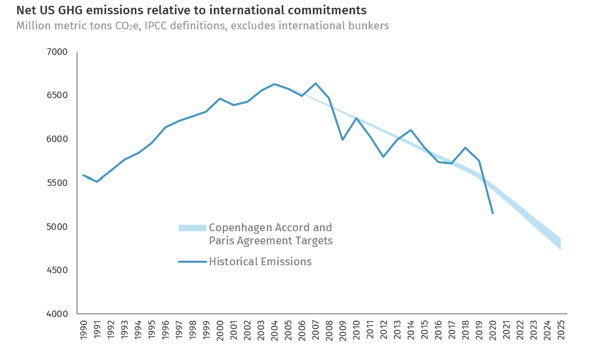 "The enormous toll of economic damage and human suffering as a result of the pandemic is no cause for celebration," observes the report. "The vast majority of 2020's emission reductions were due to decreased economic activity and not from any structural changes that would deliver lasting reductions in the carbon intensity of our economy."

President Trump withdrew the U.S. from the Paris Climate Agreement the day after the November 2020 presidential election. Under that agreement, the Obama administration had pledged to further cut U.S. GHG emissions by 26 to 28 percent below their 2005 levels by 2025. President-elect Biden has promised to rejoin the Paris Climate Agreement on "day-one" of his administration and to set the U.S. on a path toward net-zero GHG emissions by 2050. Some recently calculated scenarios suggest that this goal is achievable, but the economic and political tradeoffs will be fierce.