President Donald Trump's refusal to concede the 2020 election is an embarrassing low for a Republican Party that has grown increasingly detached from reality. But I can't agree with a Washington Post article arguing that it's evidence the party has embraced "rising authoritarianism."

Don't misunderstand me: There's a strong argument to be made that Trump has presided over a decrease in human freedom, moving the government in a more authoritarian direction. In his case against the president, Reason's Matt Welch called him an "erratic authoritarian," citing the president's bad impulses on immigration, trade, and countless other areas.

But the Post article attempts to quantify the GOP's slide toward authoritarianism, citing a research paper by the V-Dem Institute. According to this organization, the GOP has moved in a markedly illiberal direction since 2006, while the Democratic Party…has not budged at all.

"The Republican Party score started to edge downward during the Obama administration but fell off a cliff in 2016 with the ascent of Trump," says The Post, summarizing V-Dem's data. "The Democratic Party, by contrast, hasn't changed much."

There's a problem with this analysis: It relies on "data" that aren't really data at all.

V-Dem's study draws from subjective scores provided by 600 political scientists who were asked to rate the parties on various issues. Several of these do not have a direct correlation with illiberalism: The scientists considered parties' "anti-elitism," "invocation of religion," and failure to provide "state support for working women," among other things. 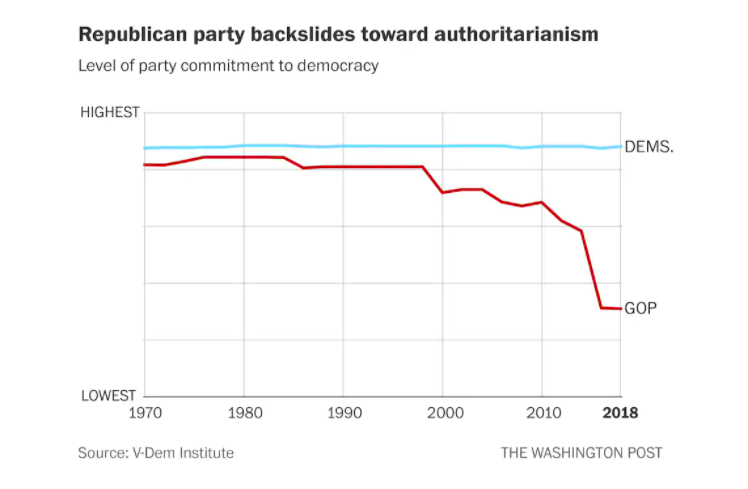 An additional chart suggests a similar trajectory on the subject of "demonization of opponents": 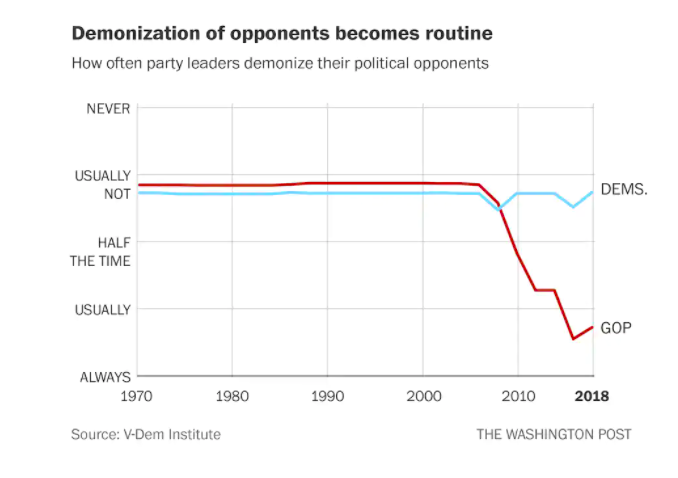 Is the Democratic Party really no more inclined to demonize its opponents today than it was in 1970? Such a claim simply does not square with reality—but again, there's no real science being done here. These are just political scientists' subjective opinions, not rigorous measurements of anything.

No doubt violent crimes have been committed in Trump's name. But violent crimes have also been committed by people in the anti-Trump camp. Let's not pretend that there's some vast wave of Trump-fueled and Trump-endorsed violence and no equivalent intolerance on the other side whatsoever. In fact, when it comes to violence, the under-publicized reality is that non-ideological violence—for which neither party's rhetoric deserves blame—is far, far more common than political violence.

Political scientists should feel free to simply criticize Trump and the GOP—such criticism is well deserved. But fancy charts that prove the Republicans are authoritarians while the Democrats are perfect angels with an unchanging and unmoving love of civility, tolerance, and nonviolence…come on. They're about as scientific as the political spectrum chart below. 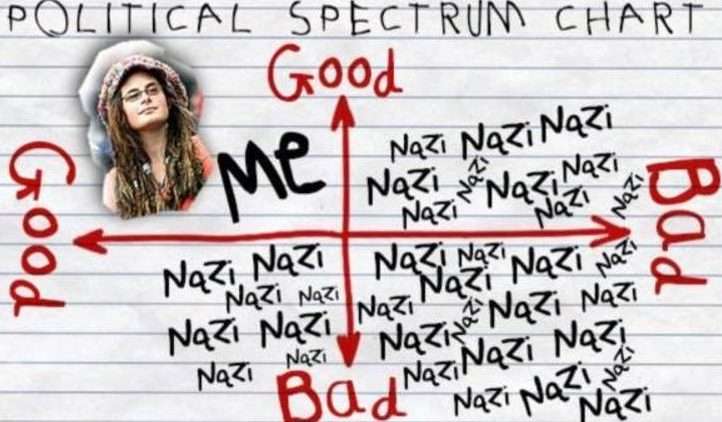