In its annual World Energy Outlook report, the International Energy Agency (IEA) finds that, due to steeply declining costs, solar photovoltaic (PV) electric power generation "is consistently cheaper than new coal- or gas-fired power plants in most countries, and solar projects now offer some of the lowest-cost electricity ever seen." Taking into account the declared energy policies of various countries, the IEA projects that renewables will meet 80 percent of the growth in global electricity demand to 2030. This makes solar "the new king of electricity."

According to the IEA report, new utility-scale solar projects now cost $30 to $60 per megawatt-hour (MWh) in Europe and the U.S. and just $20 to $40 per MWh in China and India, where "revenue support mechanisms" such as guaranteed prices are in place (we'll get to the issue of the guaranteed prices shortly). This analysis accords with the new levelized cost of energy report from the Lazard financial consultancy that finds that electricity from unsubsidized utility-scale solar PV costs between $29 and $42 per MWh. The levelized cost of energy analysis takes into account the capital costs, fuel costs, operations and maintenance costs, debt and equity costs, and plant utilization rates for each type of electric power generation.

The Lazard report further finds that "as the cost of renewable energy continues to decline, certain technologies (e.g., onshore wind and utility-scale solar), which became cost-competitive with conventional generation several years ago on a new-build basis, continue to maintain competitiveness with the marginal cost of selected existing conventional generation technologies." As the Lazard analysis shows, when U.S. government subsidies are included, the cost of onshore wind and utility-scale solar is competitive with the marginal cost of fully depreciated coal, nuclear, and combined-cycle gas generation plants. "The former values average $31/MWh for utility-scale solar and $26/MWh for utility-scale wind, while the latter values average $41/MWh for coal, $29/MWh for nuclear, and $28/MWh for combined cycle gas generation," notes the report.

Way back in 2014, Lazard reported that the levelized unsubsidized cost of utility-scale solar PV was then between $72 and $86 per megawatt-hour. How much lower could solar PV power generation costs go? Ramez Naam, technologist and author of the excellent book, The Infinite Resource: The Power of Ideas on a Finite Planet (2013), projected earlier this year, assuming current trends continue, that in sunny parts of the world the cost of generating a kilowatt-hour of electricity through solar PV would fall to just a penny or two by 2030 or 2035. As result, he added, "Building new solar would routinely be cheaper than operating already built fossil fuel plants, even in the world of ultra-cheap natural gas we live in now." 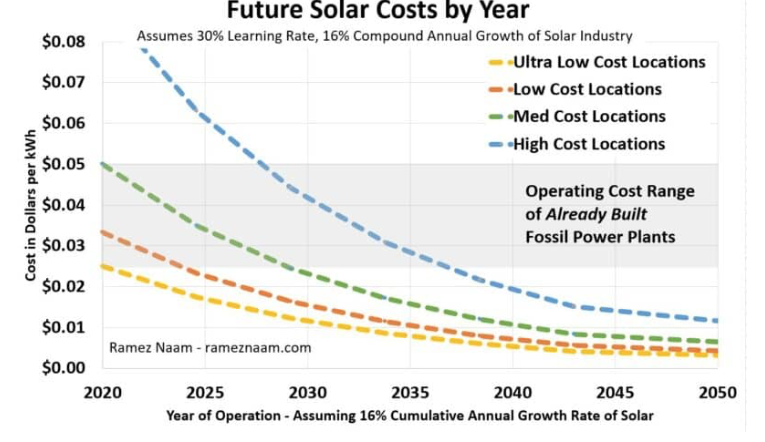 Generating electricity is, however, not the only cost associated with getting power to the people. The intermittency of solar (and wind) power requires, among other things, the buildup of a more nimble digitized transmission grid so that power can be relayed rapidly between regions to account for shifts in power generation. According to the U.S. Energy Information Administration, power generation accounts for about 58 percent of the cost of power to retail consumers; the rest is transmission and distribution. Given current trends in renewable power adoption, the IEA projects that $460 billion will need to be spent by 2030 to modernize electrical grids around the world.

In addition, renewable power sources need backup generation or massive storage to make up for generation shortfalls when the sun is not shining and the wind is not blowing. How to pay for electricity generation and storage that are idle much of the time has to be addressed as well.

As a brief report from Resources for the Future think tank explains:

Renewable energy sources do not require fuel inputs to run since they use energy from the sun, wind, and other natural sources. Consequently, they are able to offer bids of $0 into the energy and capacity markets. As these sources make up a larger portion of the grid over time, these $0 bids can significantly reduce wholesale prices for energy and capacity and could discourage long-term investment for all resources. As a result, wholesale markets may need to adapt in the future to better accommodate different types of resources.

In other words, solar power that is eventually too cheap to meter creates the problem of how to pay for the infrastructure required to make and transmit.

"If private capital is to fuel the renewables wave, it seems likely the sector will need to move from a more commoditized market where revenues are determined by a price per kilowatt hour to one in which revenue is generated by providing guaranteed delivery of electricity when it is needed from sources either desired by the customer or required by regulation," suggests Brian Murray, the director of the Duke University Energy Initiative in his Forbes article, "The Paradox of Declining Renewable Costs and Rising Electricity Prices." He likens the solution to the way phone and internet service is delivered today in which different customers pay different prices to purchase different service delivery plans.

A 2019 article in The Electricity Journal outlined just such an approach for how wholesale power markets might be restructured to accommodate zero marginal cost electricity. In a nutshell, power consumers would be offered a portfolio of service contracts that allow them to choose plans that align with what they desire, value, and can afford. This range of portfolios would compensate utilities for their generation and transmission infrastructures while enabling them to more cost-effectively balance power demand and supply.

For example, a budget plan setting upper limits on customers' peak loads could be coupled with automation technology that helps them minimize the impact of power restrictions on their most critical uses. A premium plan would charge customers more for their higher capacity and for the amount of power they consume per month. Or customers could choose an intermediate capacity plan with a wide range of home automation services that enable them to stay within limit of the amount of power for which they wish to contract.

All signs are that cheap solar power is coming and that's really good news.