The first night of the 2020 Republican National Convention (RNC) revolved around an aggressive show of faux-normalcy, mixed with unhinged praise for Dear Leader, fanfic about his administration, and absolutely insane fearmongering about how Democrats will turn the suburbs into Mad Max.

Differences between the RNC and last week's Democratic National Convention were stark. RNC production values were definitely better—from a purely aesthetic standpoint, at least. The DNC was heavy on people broadcasting from home or alone on a stage, and looking like they were doing so, while the heavily produced RNC setup strove to suggest that everything was business as usual, with no video chat broadcasts and speakers addressing an empty but ornate auditorium. Some have mocked the Democrats for this, suggesting that it's a comment on the parties' respective abilities to put on a good show.

But both productions convey a deeper meaning that fits in with their election messaging. For Democrats, the sparseness and video broadcasts helped emphasize the fact that the country is still in the middle of a pandemic, which is key to much of their pitch: President Donald Trump has bungled the COVID-19 response, we will do better. Meanwhile, the splendor and attempted typicality of the Republican convention fits with the party's message: Things are better than fine, things will keep being this way if we get a second Trump term. Democrats are just trying to play a catastrophe to their political advantage.

Aesthetic differences were only the beginning, however. The most striking split—all policy aside—was at whom the convention content seems to be aimed.

The Democratic convention was relatively light on more left-leaning viewpoints and went comparatively easy on bashing the other side, emphasizing Trump's basic uncouthness and major blunders without devolving into paranoid conspiracies (a la 2016), slamming anyone who voted for Trump last time, or making this a referendum on Republicans as a whole. Their convention was clearly aimed at reaching independent or on-the-fence voters who think something is off about Trump but don't necessarily think he's The Worst, or who want to vote against him but aren't so sure about, say, defunding the police or supporting Medicare for All.

The first night of the RNC went entirely in the opposite direction. There was little designed to appeal to people who weren't already firmly on Trump's side, or at least already so vehemently against Democrats that they'd vote for any Republican to beat them.

So far, the RNC seems to be mostly providing content designed to thrill MAGA devotees who already love Trump. I'd think that's a questionable strategy.

Hagiography about Trump himself was high among speaker priorities. Charlie Kirk, internet gadfly and founder of the conservative student group Turning Point USA, opened things up by calling Trump "the bodyguard of western civilization." A speaker slated to talk about right-to-try laws mostly just raved about Trump's alleged wisdom and courage.

And then there was whatever this was, from Fox News pundit Kimberly Guilfoyle:

If you've ever wondered what a cross between a televangelist sermon, a Home Shopping Network infomercial, a fascist rally, and a psychotic break would look like…well, I think we've got the answer in Guilfoyle's speech!

She was just one of a number of speakers portraying absolutely catastrophic visions of life in Joe Biden's America. Nevermind that folks have already lived under a Biden and Barack Obama—whom no one would accuse of being less liberal than Biden—administration and crime didn't run rampant, private enterprise persisted, and no housewives were forced into critical race theory education camps. The Republican messaging on Democrats last night was hysterical pandemonium, with repeated suggestions that Democrats are "socialists" who want to "abolish the suburbs."

The abolish-the-suburbs talk was particularly grating because it turned on Republican opposition to deregulation. Their whole shtick here revolved around decrying the easing of certain zoning laws, a sort of NIMBYism ("not in my backyard") which suggests that allowing "low-quality apartments" to be built would turn every quiet suburban backyard into Sodom. 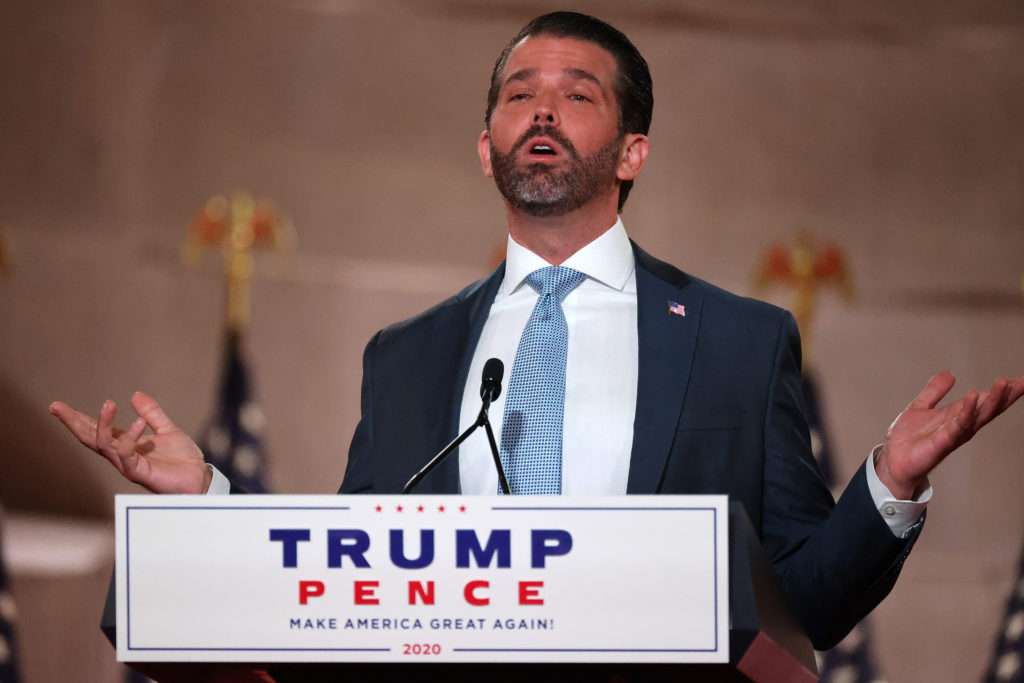 But it was speakers' comments on policing, criminal justice, and COVID-19 that were truly gross. They bashed people protesting George Floyd's murder (and police brutality more generally) as thugs, criminals, communists, and terrorists. They repeatedly praised Trump's handling of COVID-19 and suggested that he alone could save America from even more pandemic-induced deaths.

OK, the claims about Trump's quick action and leadership saving millions of lives during the coronavirus crisis are honest-to-God obscene.

No, Trump has not fiercely defended the First Amendment.https://t.co/vLK91tkAMU

"We want this nation to continue to be a beacon of hope to the world."

Check out more Reason reporting and commentary from the first night of the RNC here:

As C.J. Ciaramella noted, the RNC tried to have it both ways on criminal justice issues:

Speakers at the first night of the 2020 Republican National Convention tried to navigate two competing messages on the criminal justice system. One was that Joe Biden was an architect of mass incarceration and lock-em-up policies, which Donald Trump rightfully rolled back. The other message was that only Republicans will stand up for police and the law.

Sen. Tim Scott (R–S.C.), the only black Republican in the Senate, assailed Joe Biden for his role in the 1994 crime bill and creating sentencing disparities between crack and powder cocaine.

[…] But at the same time that speakers were lauding Trump for criminal justice reforms that rolled back some of the laws that Biden helped pass, they were making constant references to riots, violent criminals being let loose on the street, and the threat of antifa mobs coming to your suburban neighborhood once the Marxist Democrats defund the police.

Overall, the night was (like its Democratic counterpart) pretty low on talk of an actual agenda and overflowing with emotive vision-boarding for America. But while Democratic dreams and delusions were at least grounded in some sort of party platform, the only theme Republicans—who have no 2020 policy platform, just a pledge to support whatever Trump does or says—seemed able to stick with was cult-like loyalty to and trust in one man.

• Constitutional lawyer and Godwin's Law creator Mike Godwin on the crusade against TikTok: "I know what moral panics look like; they look kind of like this." Godwin is one of the lawyers on a new lawsuit from TikTok employee Patrick S. Ryan. Both Ryan and—in a separate lawsuit—TikTok Inc. are challenging Trump's executive order banning the social media app.

• What does left libertarianism really mean?

I consider the left/right axis to be an economic one. I abhor being labeled a "left libertarian" because I support issues like ending the drug war, liberalizing immigration, and gender equality. Those aren't "left"; they're standard libertarian positions EVERY libertarian holds. https://t.co/m0zmRNxoaX

Here is @mattwelch on FBN talking with Maria Bartiromo about the Republican Convention, Trump, and related topics. pic.twitter.com/LLbYexHHj7