Group wins challenge to Tennessee law against "false" speech in campaign literature. Is calling a political candidate "literally Hitler" illegal? Not in Tennessee, according to a new court ruling.

The case was brought by the nonprofit group Tennesseans for Sensible Election Laws, which created a flyer critical of state Rep. Bruce Griffey and his proposal to chemically castrate some people convicted of sex offenses against minors.

"Bruce Griffey is LITERALLY HITLER" it says at the  top and, underneath that, "Bruce Griffey: an agenda the Nazis would love."

"You would think in 2020 we've moved on from Nazi-style population control, but here we are," the flyer continues before explaining Griffey's proposal and calling for people to "Vote NO on Bruce Griffey."

Tennessee state law prohibits publishing or distributing "campaign literature in opposition to any candidate in an election" if any "statement charge, allegation, or other matter contained therein with respect to such candidate is false." It makes no exceptions for satire, hyperbole, or parody. 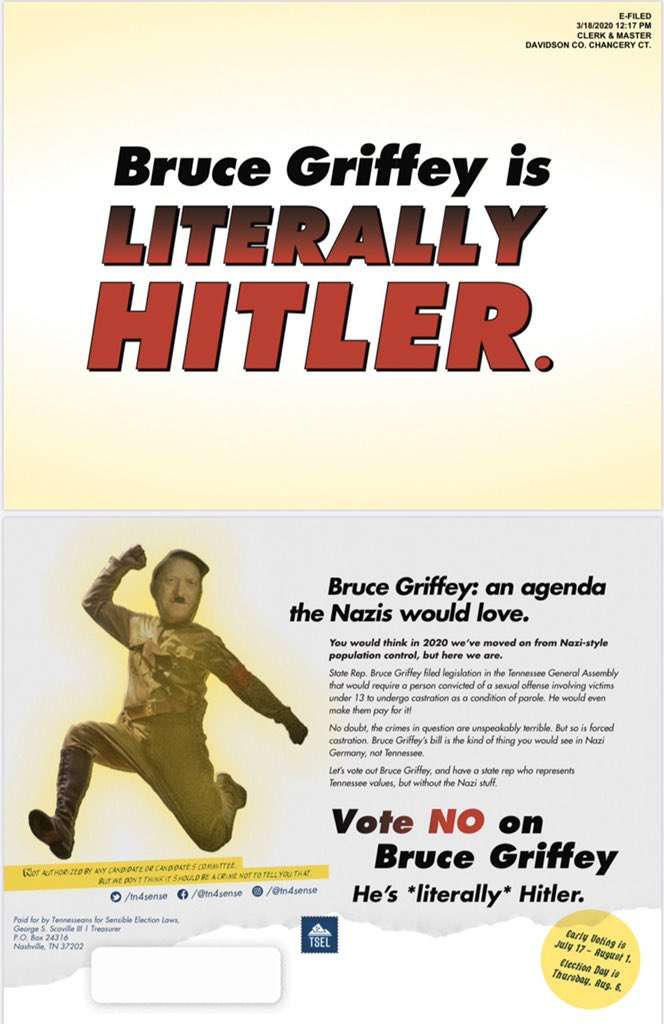 Under the law, Tennesseans for Sensible Election Laws (TSEL) would have faced a fine and jail time for distributing the "literally Hitler" flyer. Instead, the group filed a lawsuit challenging the Tennessee law and asking for the right to distribute "satirical, parodical, and hyperbolic campaign literature."

Last Thursday, Davidson County Chancellor Ellen Hobbs Lyle ruled in the group's favor, finding Tennessee's prohibition on "false speech" in election communications to be a violation of the First Amendment and the Tennessee Constitution.

The law "punishes only false political speech in opposition to candidates for elected office, while permitting false speech in support of such candidates," noted Lyle in her decision. "Such viewpoint discrimination is incompatible with the First Amendment, and no compelling interest supports it." More from the decision:

Third, Tennessee Code Annotated § 2-19-142's criminalization of "false" speech cannot be reconciled with the U.S. Supreme Court's decision in United States v. Alvarez, 567 U.S. 709 (2012), which held that a statement's falsity alone is insufficient to remove it from the ambit of protection guaranteed by the First Amendment.

Fifth, by restricting speech based on its content, by proscribing protected speech, and by criminalizing political speech based on viewpoint, Tennessee Code Annotated § 2-19-142 contravenes the more expansive protections of article I, section 19 of the Tennessee Constitution.

"The framers of our Constitution believed that robust public speech and debate would be essential to self-government," said TSEL Executive Director and Treasurer George Scoville in a statement following the ruling. "This law tried to put its thumb on the scale, favoring the very people who enacted it—Tennessee state lawmakers—to the detriment of members of the voting public, who also have a reciprocal right to hear political communications and decide for themselves what matters in an election, including what is true or false."

"Soon after the ruling on Thursday, Tennesseans for Sensible Election Laws announced plans to send the mailers comparing Griffey to Adolf Hitler," the Nashville Tennessean reports.

Trump talks COVID-19 numbers. In a new interview with Axios reporter Jonathan Swan, President Donald Trump displayed (once again) what's either an astoundingly abysmal understanding of charts and statistics or a willful attempt to confuse Americans about how poorly we're doing at controlling the new coronavirus compared to other countries. See for yourself below:

Swan: "Why can't I do that?" pic.twitter.com/MStySfkV39

More on Microsoft, Trump, and TikTok. After threatening to ban the extremely popular Chinese-owned TikTok, then saying it was OK for Microsoft to acquire the company for U.S. users if they did so by September 15, the president spoke about the situation again at a Monday press conference, suggesting the federal government should get a cut of whatever deal may be struck.

"A very substantial portion of that price is going to have to come into the Treasury of the United States, because we're making it possible for this deal to happen," Trump told reporters.

"Both parts of this are incredibly disturbing: The casual assertion that Trump can unilaterally 'shut down' a media platform, and the implication that the government would somehow extort a payment as a condition on a business acquisition," commented Julian Sanchez, a senior fellow at the Cato Institute who focuses on tech policy and privacy issues. "This is a laughably thin 'national security' pretext being invoked to abuse executive emergency authorities in order to expropriate a foreign company. If China was pulling this, we'd recognize it easily for what it was."

How the media might blow the election. A massive increase in mail-in voting due to the COVID-19 pandemic will mean election result delays that could drag on for weeks. That leaves a lot of time for media-driven mishaps and more, warns Ben Smith at The New York Times:

The coronavirus crisis means that states like Pennsylvania may be counting mail-in ballots for weeks, while President Trump tweets false allegations about fraud. And the last barriers between American democracy and a deep political crisis may be television news and some version of that maddening needle on The New York Times website.

I spoke last week to executives, TV hosts, and election analysts across leading American newsrooms, and I was struck by the blithe confidence among some top managers and hosts, who generally said they've handled complicated elections before and can do so again. And I was alarmed by the near panic among some of the people paying the closest attention—the analysts and producers trying, and often failing, to get answers from state election officials about how and when they will count the ballots and report results.

"The nerds are freaking out," said Brandon Finnigan, the founder of Decision Desk HQ, which delivers election results to media outlets. "I don't think it's penetrated enough in the average viewer's mind that there's not going to be an election night. The usual razzmatazz of a panel sitting around discussing election results—that's dead," he said.

• "Americans can't agree on whether face masks are a good way to reduce the threat of transmitting COVID-19," writes J.D. Tuccille. "But we should at least be able to agree that face coverings are a great way to defeat the surveillance state—especially now that the U.S. government has conceded that masks confuse the hell out of facial recognition technology."

•  Some smart insights from Jennifer Huddleston, director of technology and innovation policy at the American Action Forum, on last week's Congressional "antitrust" hearing.

•  COVID-19 "flare-ups and local lockdowns for the next year or two" are "entirely possible," said Neel Kashkari, president of the Minneapolis Federal Reserve Bank.