Jesse Goldberg, an incoming professor at Auburn University, recently took to Twitter to criticize the police: "Fuck cops. Fuck every single one," he said. Now there's a good chance Goldberg will no longer be teaching at Auburn in the fall.

Goldberg, who is to begin a position as a part-time instructor in American literature and composition, made the remarks in response to a July 28 tweet from the American Civil Liberties Union (ACLU) detailing New York Police Department officers allegedly detaining a protester in an unmarked van, as was seen in Portland. 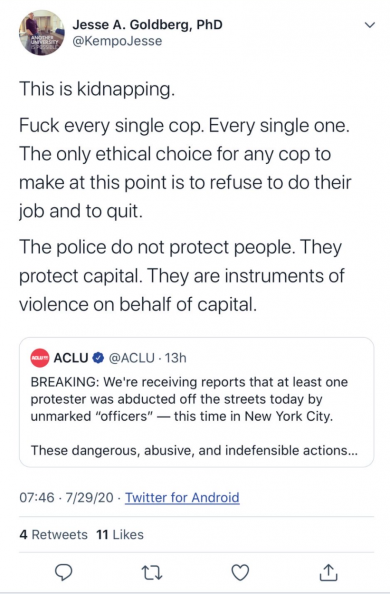 Goldberg set his tweets to private but not before Auburn caught wind of them. The university has since labeled the sentiment hate speech and threatened to terminate his contract.

"As stated earlier this week, Mr. Goldberg's comments on social media are inexcusable and completely antithetical to the Auburn Creed," the university said in a statement. "Higher education is built upon the premise of the free expression of ideas and academic dialogue, but Auburn has not and will never support views that exclude or disrespect others, including hateful speech that degrades law enforcement professionals." They added that Goldberg "was hired on a temporary, non-tenure-track assignment."

I agree that Goldberg's use of profanity was coarse and tasteless,  but Auburn's chosen response is a manifestation of the same cancel culture that conservatives typically decry.

It's also against the law. "At public universities anywhere in the country, faculty members have a First Amendment right to speak on matters of public concern, even if others find that expression deeply offensive," writes Adam Steinbaugh of the Foundation for Individual Rights in Education (FIRE), a nonpartisan organization that defends free speech on college campuses, in an open letter to Auburn. "At Alabama institutions, they also enjoy a right under state law to 'take positions on public controversies,' and it is not the 'role' of the institution to suppress 'unwelcome, disagreeable, or offensive' ideas and opinions. And at Auburn in particular (which has earned a 'green light' rating from FIRE), university policy grants faculty the right to 'speak or write on matters of public interest' without 'institutional censorship or discipline.'"

That a state Republican lawmaker also called for Goldberg's dismissal on ideological grounds is instructive. "You wonder how our society raised a bunch of communist [sic] that hate our country? Here is one of the main sources of the problems in our society. Universities!" wrote Alabama Rep. Brett Easterbrook (R–065) on Facebook. "Not all college professors are complete liberals that are educated beyond their understanding, but here is a prime example. He also thinks we should abolish a society that could have prisons. Simply release all prisoners? Obviously he has no idea what type of people are in those prisons and yet he is educating our youth."

In other words, it's not just about Goldberg's strong language, but his ideas and conservatives' willingness to tolerate them. Yet many right-leaning folks have pushed back against that sort of cancel culture in recent years, particularly on college campuses.

Consider the case of Mike Adams, formerly a tenured professor at the University of North Carolina at Wilmington (UNCW), who killed himself two weeks ago after finalizing a separation agreement with the school. He, too, had inspired backlash over his tweets, though they were of a conservative persuasion.

"When someone kills a cop you know his last words were probably either 'Allahu Akbar' or 'Black Lives Matter,'" he tweeted in August of 2016. His incendiary tone did not die down over the years. "This evening I ate pizza and drank beer with six guys at a six seat table top. I almost felt like a free man who was not living in the slave state of North Carolina," he wrote in May of this year. "Massa Cooper, let my people go!"

That last tweet led to his departure from the school.

Adams, like Goldberg, had a vulgar and unproductive way of expressing some of his views. He was also a defender of free speech on campus.

Social media culture may have led to a race to the bottom to see who can be the most inflammatory when defending their own positions. But we can't elevate the debate by banishing those we disagree with from the public sphere—something Auburn apparently doesn't understand.