Federal law enforcement agencies "are surging resources" in protest areas. A young man was hospitalized Saturday and required facial reconstruction surgery after being shot in the head by an impact munition that federal agents fired into a crowd of peaceful protesters in Portland, Oregon. The agents were there to carry out a recent executive order, framed by the White House as a move to protect national parks and monuments.

Twenty-six-year-old Donavan LaBella was holding a speaker above his head across from the federal courthouse in downtown Portland when one of a group of camouflage-clad federal agents threw some sort of smoking, flashing canister at him. LaBella rolled the canister away from this feet, into an empty portion of the street, then held up the speaker again. Suddenly there was a loud bang, then some sort of impact munition (a.k.a. "firearm-delivered projectiles," such as rubber bullets or bean bags) flying through the air. Then LaBella falls to the ground. Other protesters come to his aid and drag him out of the street.

"An American has been shot and sent to the hospital for apparently exercising his right of free speech," marveled Steven Strauss, a visiting professor at Princeton. 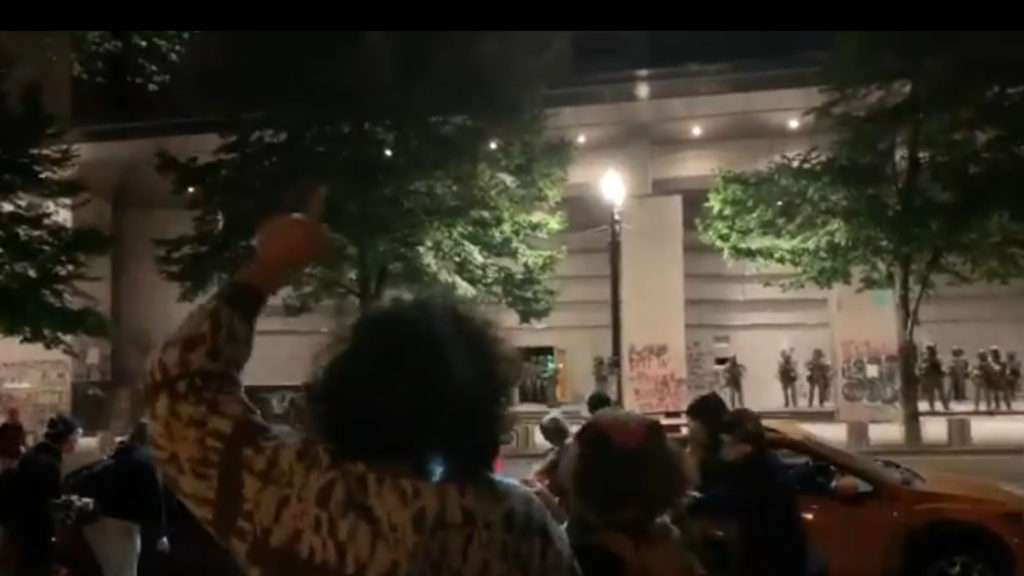 Donavan's mom, Desiree LaBella, told Oregon Public Broadcasting that her son had sustained skull and facial fractures and had to have facial reconstruction surgery. As of Sunday morning, he was responding to doctors and able to move his arms and legs.

"Desiree LaBella said she planned to contact an attorney Monday for a possible lawsuit on behalf of her son," reports Oregon Public Broadcasting. "She spoke to her son via computer late Sunday morning and said that while he was awake, doctors were monitoring his neurological condition and continuing work to drain blood from his brain."

The U.S. Marshals Service said in a statement that it was "aware of the incident" and it was "currently being investigated."

A Department of Homeland Security (DHS) official told NPR that hundreds of federal agents—including members of the U.S. Marshals' Special Operations Group, as well as a Border Patrol Tactical Unit—had been deployed in Portland and elsewhere around the country as part of Trump's June 26 executive order. DHS "sent officers to Portland; Seattle; Washington, D.C.; and Gettysburg National Park in Pennsylvania, according to a DHS official who spoke on background."

At a military briefing in Florida last Friday, President Donald Trump asked for an update on protests in Portland, saying to the DHS head "we sent you there recently….And you people are handling it very nicely."

NPR notes that "Wolf claimed there had been violence against officers in Portland. DHS later clarified Wolf was referring to fireworks shot toward officers as well as protesters pointing lasers at federal police. Several protesters in Portland were charged with assault on a federal officer because of those actions."

Free press facing growing threats around the globe. Journalists around the world are facing governmental threats to their safety and freedom. "Power is consolidating power," Maria Ressa, co-founder of the Filipino news site Rappler, told Ben Smith of The New York Times.

Smith looks at how "journalism that confronts power"—in the Philippines, Malaysia, Hungary, Russia, and elsewhere—is being thwarted and those writing and publishing it are being attacked:

Ms. Ressa [who was convicted under a new "cyber libel" law] is awaiting her appeal. Lina Attalah, the editor in chief of one of Egypt's few remaining independent voices, Mada Masr, was arrested while interviewing an activist in May and is also out on bail. A Meduza correspondent was held by police in Moscow for two nights on trumped-up drug charges last summer.

"They are the little Gaulish village holding out against Rome," marveled Naresh Fernandes, the editor and co-founder of Scroll, an Indian news site. Scroll, like the Hong Kong Free Press, represents a different strain in the current crisis for independent media—both are digital outlets in countries now rolling back their once-robust free press traditions….

The attacks on them are a tribute to their power, to an independence that reflects the best promise of the internet and to the threats they pose to corrupt and autocratic leaders.

Get government out of marriage licensing.

This absurd story about bureaucratic delays to get married even virtually shows why government should get out of the business and let people simply register their marriages. https://t.co/RhabNSQ6hU via @THECITYNY

• Fiona Apple speaks out for people in prisons wracked by COVID-19:

Fiona Apple stepped up. After a federal judge dismissed dozens of sworn declarations from inside jail as "unhelpful" & only "marginally relevant." She didn't want anyone to ignore them. So she read their words. "I've lost my spirit, sort of given up." More:pic.twitter.com/MSX9DykIc2

• President Donald Trump donned a mask in public for the first time over the weekend. "It's really essential to wear masks," Admiral Adm. Brett Giroir, an assistant secretary at the Department of Health and human Services, told ABC's This Week. "We have to have like 90 percent of people wearing the masks in public in the hot spot areas. If we don't have that, we will not get control of the virus."

• Jerome Adams of the U.S. Public Health Service—who started the pandemic telling people that masks didn't work—has changed his tune, telling Face the Nation that "once upon a time, we prescribed cigarettes for asthmatics, and leeches and cocaine and heroin for people as medical treatments….When we learn better, we do better."

• Florida continued to report bad COVID-19 numbers over the weekend:

Florida reports a staggering 15,300 new coronavirus cases in the past 24 hours.

This is the highest single-day increase any state has ever reported since the pandemic began.

• A somber look at the decline of U.S. newspapers.

• Mike Masnick with an interesting and nuanced take on the Harper's letter.

• "The practice of civil asset forfeiture in contemporary times has its roots in the War on Drugs, and is often defended on the grounds that it's necessary to seize ill-gotten assets from drug lords. But in reality, the practice often sweeps up either completely innocent people or those only peripherally related to criminal activity," writes the Orange County Register editorial board.

Police officer: any body position is suspicious, whatever the fuck that position may be:https://t.co/RXTV73ECUL pic.twitter.com/LBpisGUbVI