Former New York City Police Department (NYPD) officer David Afanador has been arrested and charged with strangulation and attempted strangulation, after violating the city's brand new ban on police choking suspects. That law—the Eric Garner Anti-Chokehold Act, named after the man killed by police in 2014 for selling black-market cigarettes—was passed by state lawmakers on June 8. It "establishes the crime of aggravated strangulation for police officers or peace officers where such officer commits the crime of criminal obstruction or breathing or blood circulation, or uses a chokehold or similar restraint, and causes serious physical injury or death."

This past Sunday, Afanador used a chokehold on Ricky Bellevue, a 35-year-old black man he was arresting on a Far Rockaway, Queens, boardwalk, after cops were summoned there about someone shouting things in a way that scared someone passing by. Afanador had his arm around Bellevue's neck until Bellevue appeared to pass out. 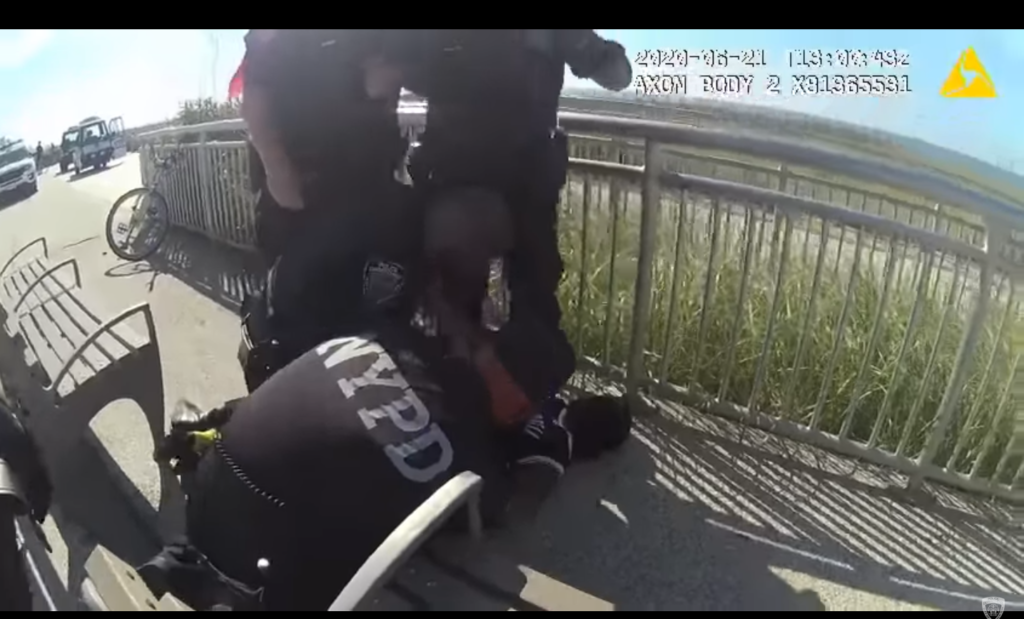 Video of the arrest and illegal restraint was first shared on Facebook, and then the NYPD released body camera footage of the whole encounter. The body-cam video shows Bellevue and two friends walking on a boardwalk, talking with and periodically yelling things at some police officers. An NYPD spokesperson told BuzzFeed that officers were there because someone had called about a man being disorderly. 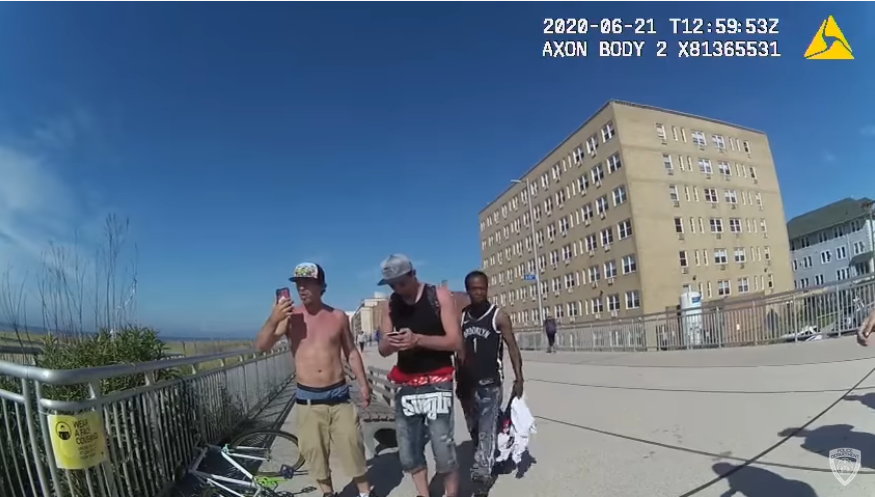 In the body-cam footage, a friend of Bellevue—who was charged and tackled to the ground after reaching toward a public trash can—can be heard repeatedly shouting "Yo, stop choking him! He's choking him! Let him go!"

The officer eventually stops. After a little bit, cops pull the handcuffed man up and march him toward their vehicle. As he's handcuffed, the man who was choked tells police he is bipolar and asthmatic.

"My whole body hurts," Bellevue tells the police at one point. 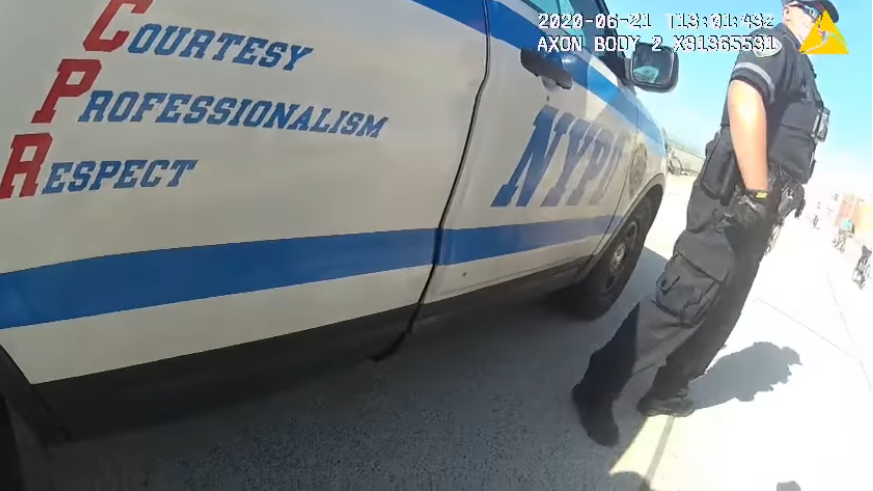 On Thursday, the Queens District Attorney's Office announced that Afanador had been "charged with attempted aggravated strangulation and strangulation in the second degree" and faces up to 7 years in prison if convicted. It also said that Afanador was "suspended without pay by the New York City Police Department hours after a video of the incident went viral online."

Here's how the D.A.'s office describes the incident:

Afanador was responding to a call of someone screaming and yelling at people on the Boardwalk shortly after 8 a.m., Sunday, June 21, 2020. Afanador and several other police officers encountered 3 men who proceeded to taunt and heckle the officers as a couple of them simultaneously video recorded the police on their cell phones. At one point, 35-year-old Ricky Bellevue asked the police officers if they were scared and appeared to retrieve a can from a trash receptacle. That's when 4 police officers grabbed Bellevue, including Afanador, who allegedly wrapped his arm around the man's neck as he was pinned to the ground. 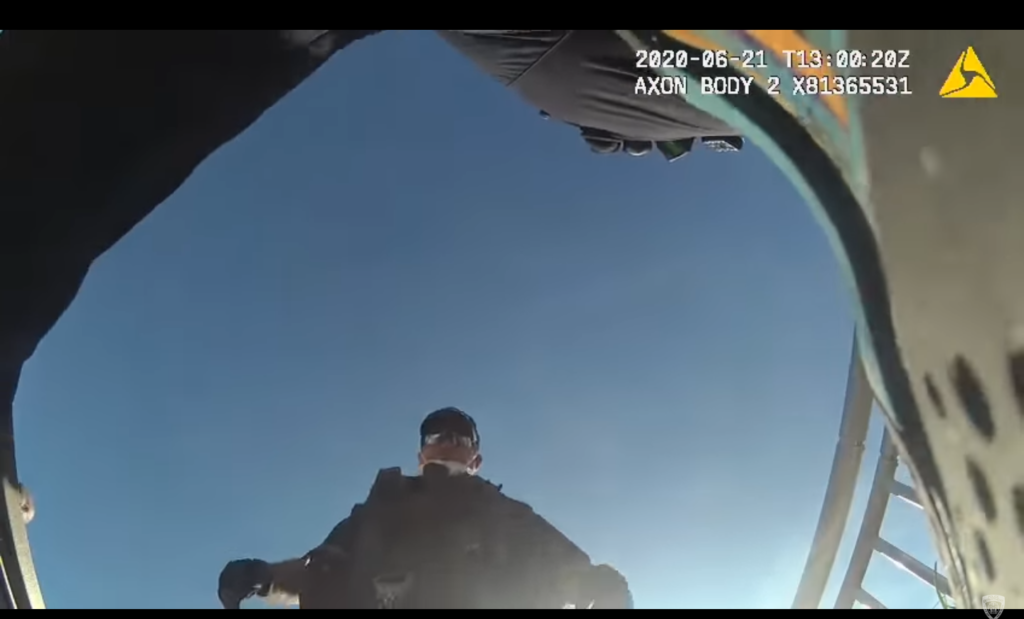 Also on Thursday, police officer Jordy Yanes Martel of Miami Gardens, Florida, was arrested after having knelt on the neck of a pregnant woman and tased her in the stomach multiple times. This abuse, which took place in January—and preceded the woman miscarrying—was caught on video. The video contradicted Martel's claims that the woman was resisting arrest.

But Martel was not fired until last week—and not for the abuse of the pregnant woman, but for a separate "excessive force complaint in a March incident at a RaceTrac gas station," reports Forbes. The Miami-Dade State Attorney announced yesterday that Martel had been arrested and charged with battery and official misconduct.

Last week saw 1.48 million new unemployment claims filed in the U.S. That number, announced Thursday, is higher than had been predicted—"economists surveyed by Dow Jones had been expecting 1.35 million claims," notes CNBC. But "those receiving benefits fell below 20 million for the first time in two months."

"New jobless claims have topped 1 million for 14 straight weeks," ABC points out. "Prior to the coronavirus pandemic, the record for weekly unemployment filings was 695,000 in 1982."

The New York Times criticizes fireworks conspiracy theories (which had been promoted by one of the paper's star reporters, Nikole Hannah-Jones, on Twitter). The "far-fetched theories," as the Times describes them, suggest that the recent surge in amateur neighborhood fireworks isn't simply stay-at-home summertime revelry but some sort of covert government operation to terrorize poor neighborhoods and people of color—"a form of psychological warfare, with the light and noise meant to desensitize people to potentially escalating levels of force."

While the Times can't definitively disprove it, the paper throws water on some of the supporting "evidence" for theses theories, which mostly revolves around people feeling neighborhood fireworks displays are too large and professional-looking. As the Times points out:

Fireworks are being sold legally just over state lines in neighboring states like Pennsylvania. They are on sale in huge quantities at bargain prices as businesses, only recently reopened because of the pandemic, meet consumers eager for a flashy diversion or illegal resale opportunity, particularly as the weather warms and Independence Day nears.

In calling for investigations of these fireworks being brought into NYC, people worried about police brutality may inadvertently endanger those just trying to have a little harmless fun in a way city authorities don't approve of.

• The Supreme Court gives a green light to part of the Trump administration's immigration crackdown. "In a 7–2 vote, the court said people who fail to make a valid case for asylum in their initial screenings, by credibly claiming that they fear persecution at home, can be fast-tracked for deportation and cannot challenge that decision in federal court," NBC explains.

• "De-militarizing our police should not only be about taking away gear that is too often used to conduct violent raids on nonviolent suspects," writes Cato Institute research fellow Trevor Burrus. "It should also be about reforming the mindset, held by too many officers, that they are soldiers going to war against their fellow citizens."

???????????? Harry Reid says there's "no question" in his mind that Russian hackers covertly altered the 2016 vote count. "I think one reason the elections weren't what they should have been was because the Russians manipulated the votes. It's that simple." https://t.co/8mekUSSHC0