Protesters demanding policing reforms are understandably focused on increasing accountability and slashing police budgets at the state and local levels.

But the call to "defund the police" should not ignore the large and growing presence (and expense) of federal law enforcement in recent decades—and would-be reformers should be careful not to hand-over more power to federal agencies that will be more difficult to hold accountable than local departments.

Federal police spending has skyrocketed since the 1980s, notes Chris Edwards, director of tax policy studies for the Cato Institute, a libertarian think tank. The federal government's police budget includes includes grants for local and state police departments, though that is a small portion of overall spending. The vast majority funds traditional federal law enforcement offices like the FBI and Drug Enforcement Agency, as well as the Secret Service, Customs and Border Patrol (CBP), and the Bureau of Alcohol, Tobacco, and Firearms.

"This spending has risen much faster than state‐​local police spending in recent decades," writes Edwards. "That is a big concern if you believe in federalism and decentralized government." 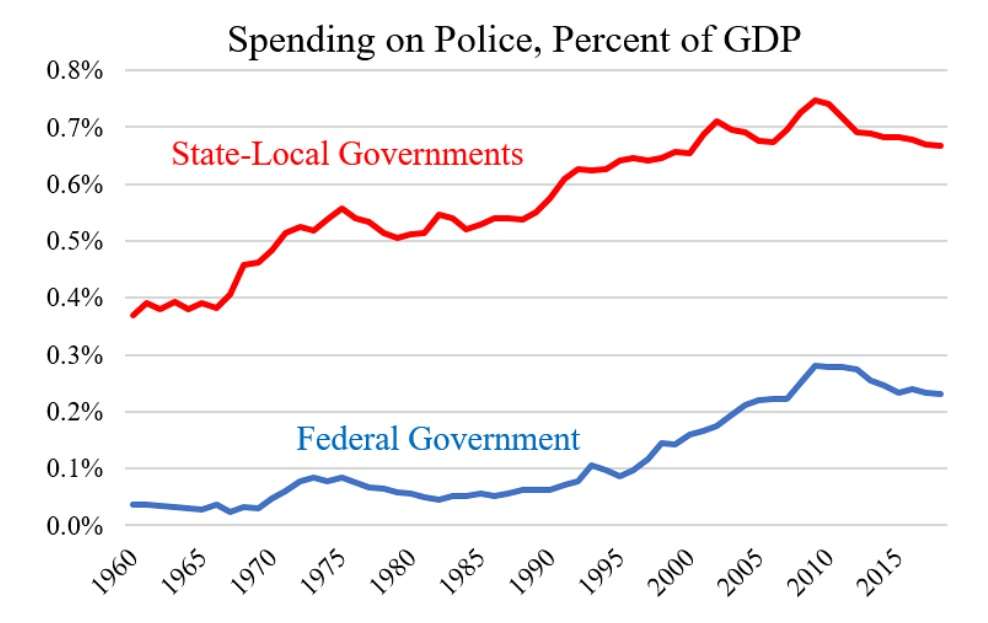 It's true that state and local governments spend a larger portion of their budgets on policing. It was a member of the Minneapolis Police Department who brutally killed George Floyd last month, and it was local and state police who were responsible for many—but not all—of the subsequent displays of police brutality aimed at protesters. It makes sense that local policing is more in the spotlight at the moment.

But that doesn't mean federal police forces should be exempt from reforms. Indeed, their growth in recent decades suggests they could be due for some budget-trimming too.

Unfortunately, the opposite seems to be happening. The Justice in Policing Act, which was introduced by House Democrats this week, would expand the role of the federal government in doing police work—and would hike federal police spending by $900 million.

Worse, perhaps, is the fact that the bill's most high-profile police accountability measure—ending the legal regime of "qualified immunity" that protects officers from being held civilly liable for damage or injuries they cause while on the job—applies only to local law enforcement and not to federal officers that are part of the FBI or CPB, for example.

An expanded, unaccountable role for federal law enforcement is hardly the appropriate response to problems with state and local police forces. As Derek Cohen, the policy director for Right On Crime, a conservative police reform advocacy group based in Texas, explained on Twitter, federal intervention in local policing issues should be a last resort. And a top-down approach is unlikely to encourage reforms.

On the contrary, if we want PDs to be more accountable to the communities they serve, we need to keep the feds from playing the role of the other parent after city council tells the department "no," whether under 1033 or the hundreds of millions of grant dollars sent their way /7

To put it another way, if you think forcing a citywide police department to change its ways is tough, wait until you're dealing with the federal government.

Slowing the growth of spending on federal police and shrinking the mandate given to federal law enforcement is, in many ways, a separate project from the one currently underway in cities across the country. But if Congress wants to get involved in fixing what's wrong with America's police departments, it should not turn a blind eye to federal law enforcement budgets that are directly under its control.

Does the Government Really Need To Help Parents Spy on Their Kids?