As people around the country gathered Saturday to protest police brutality and racism—most recently evidenced by the murders of Minneapolis resident George Floyd and Louisville resident Breonna Taylor—the District of Columbia saw a day of passionate and peaceful demonstration. But by late Saturday night, a mass of militarized cops and a small group of destructive rioters transformed the streets around the White House to one of tense and often chaotic action, as cops and protesters took turns gaining ground and a few dudes with baseball bats smashed in nearby business windows.

When I got there around 10:30 p.m., protesters had recently begun moving back part of a barrier that law enforcement had erected close to 16th Street NW, a road that butts up against Lafayette Square—the public park just north of the White House—about a block up from where the barricade battle was playing out. 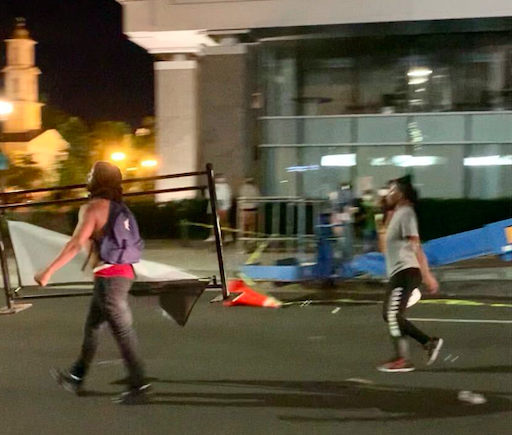 A few protesters would move a piece of the barricade forward, the rest of the group would come on up too, and then everyone would stand chanting—"I can't breathe," "No justice, no peace," "Black lives matter," or "Hands up, don't shoot"—until something spooked the line of baton-wielding, shield-carrying officers up the street into marching forward in a unison line and chanting "move back, move back, move back." 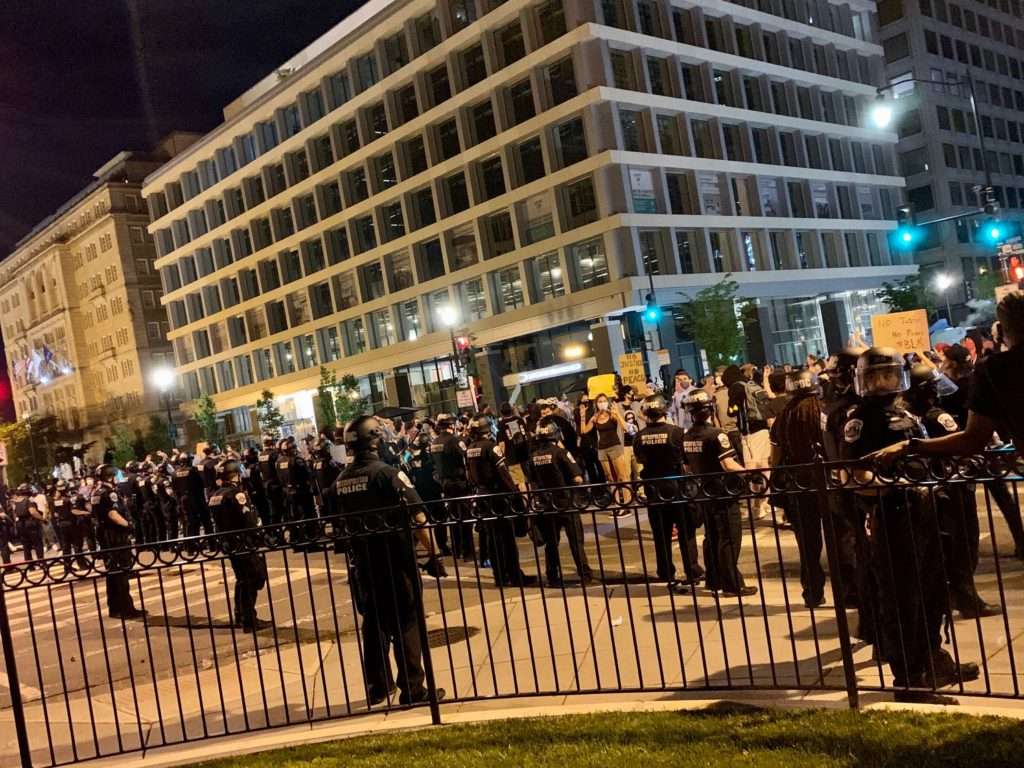 This went on for roughly 30 minutes in a fairly controlled manner. Under the neon lights of the AFL-CIO sign and backdropped by the Washington Monument, both sides breached and then retreated from the intersection of I and 16th St NW at least a couple of times. There was an occasional stream of pepper spray from the cops, or a stray object—mostly plastic bottles and other soft things, though at least one hubcap—flung from somewhere on the other side.

The fraught but symbiotic energy might have held for a while—but then the SUV caught on fire.

I don't know who torched the thing, which was parked not quite a block north of the contested intersection. But I watched the vehicle go from having little more than smoke pouring out its window to being engulfed in flames that reached up past the first story of the neighboring building—as cops inexplicably marched everyone toward the flaming vehicle.

At this point, there were police blocking off three out of four exits to the area and a rapidly growing fire near the fourth. 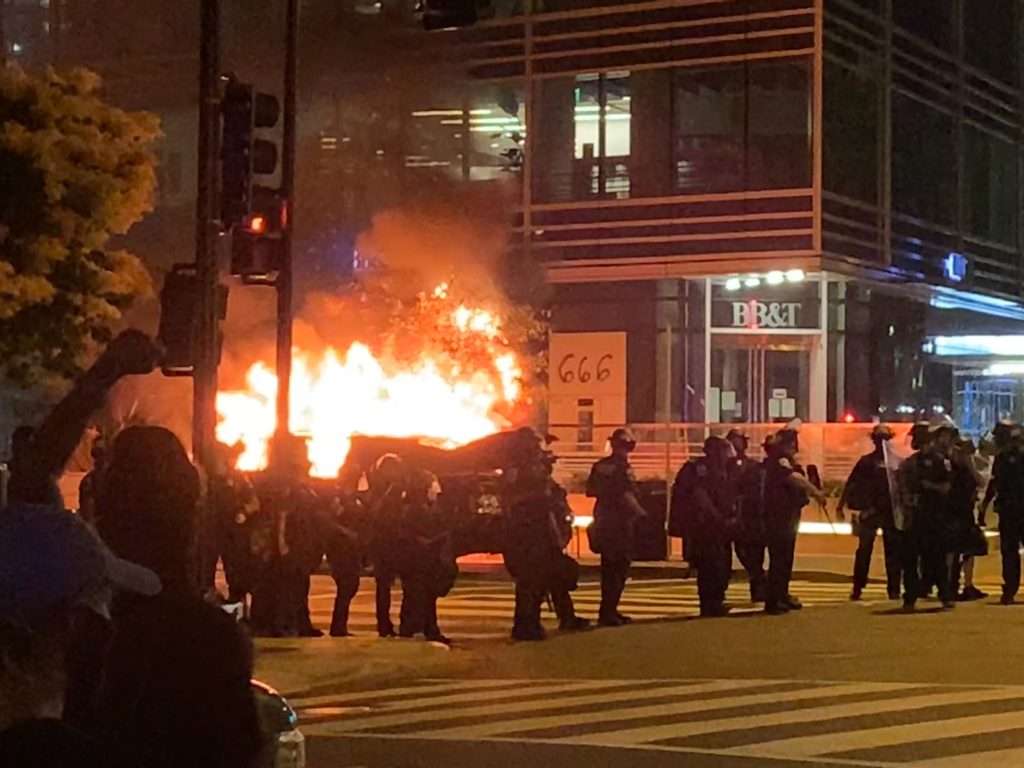 Protesters urged each other to stay away from the vehicle. A number of folks started making their way down the most open street—only to be told by the line of cops there that they had to turn around and exit the other way.

"This is some fucking bullshit, you're trying to box us in, really?" one woman shouted. A few other people tried to explain to the cops that their colleagues were also saying no exit at their ends and that there was a car on fire blocking the other exit.

The far line of cops seemed surprised to learn of the fire (which couldn't yet be seen from their vantage point) and began talking on their radios. It seemed promising, until their next move—starting a unified march forward. "Move back, move back, move back…" 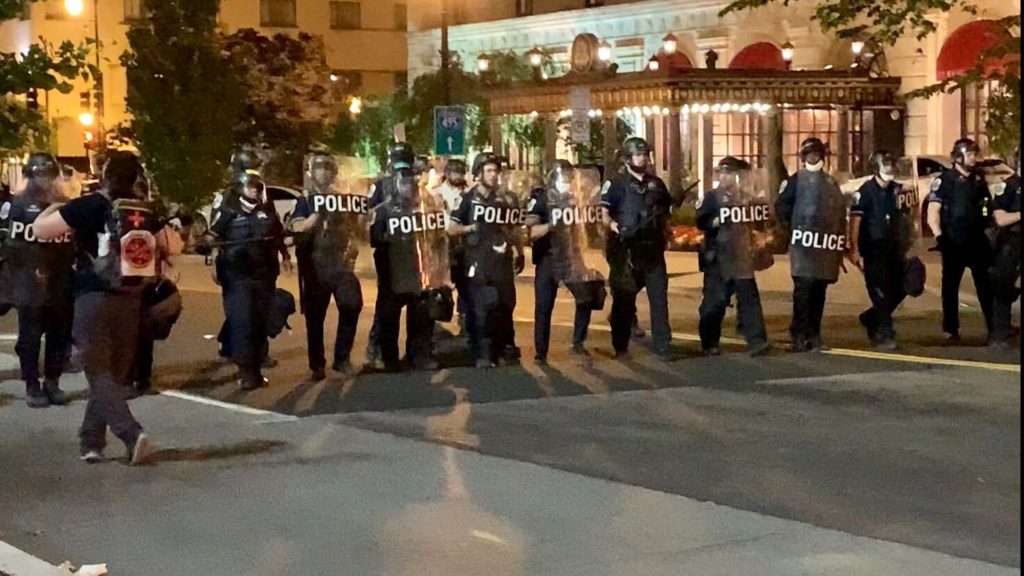 For far from the last time that evening, the lines of cops were advancing on all sides of the crowd and not letting anyone out from any side. The effect was to force socially-distanced protesters in and make the crowd get closer and closer together (increasing the risk of COVID-19 spread, though a majority of protesters and cops—but far from all in either group—were wearing masks). It also meant ushering people toward, rather than away, from areas that had been rendered dangerous and difficult to breathe in by virtue of smoke, fires, pepper spray, tear gas, and flash-bangs.

Throughout the night, officers repeatedly refused requests from people just trying to leave the protest area, only stopping just short of forcing people to trample one another.

For all of that, D.C. law enforcement still seems to have behaved better than did police in many cities with protests yesterday. Footage from New York City and elsewhere shows cops acting in myriad ways with total disregard for protesters' safety or rights. 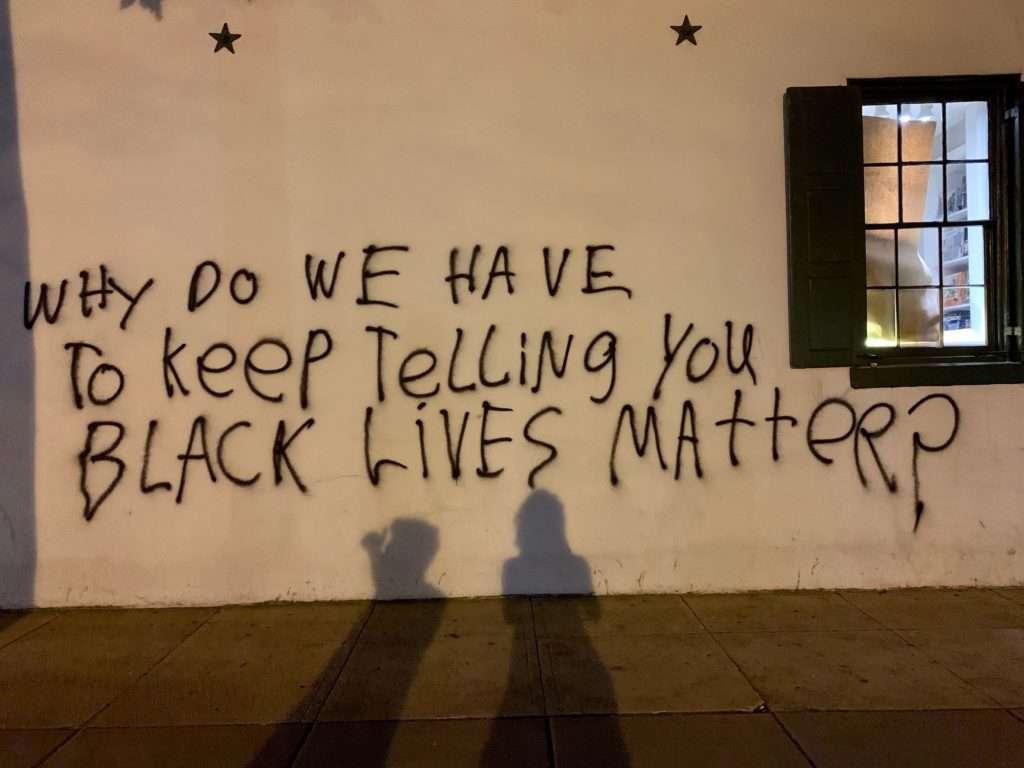 In D.C., the lines of local cops marched and drove vehicles backward from crowds on multiple occasions, retreating to avoid direct confrontation with advancing protesters. Police on the edges of their marching lines often talked politely with protesters who had questions and offered firm but non-threatening instructions to back up when necessary. And cops and protesters at the front of standoff lines repeatedly refrained from actual physical contact, despite getting perilously near. The one direct skirmish I did see between a few cops and a protester involved light pushing and then both sides backing down and moving on.

Several times, I saw officers talk hotheaded colleagues out of escalating a confrontation. In one instance, this involved an officer who got really mad that someone was "disrespecting the [U.S.] flag" by raising another flag on the pole. It had gotten sort of stuck and couldn't be read anyway at this point. But it took several cops to convince their buddy to let it go, with one eventually putting his arm around the aggro cop's shoulder and walking him away as the flag guy shouted "suck my fucking dick." 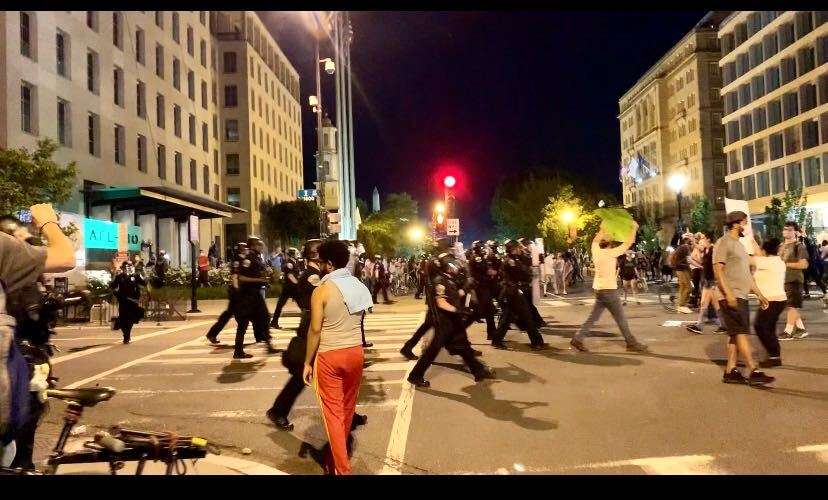 Much credit for the not-as-horrific vibe from D.C. cops must go to the protesters themselves. People were testing limits but, with very few exceptions, ultimately complying with orders from police and trying to keep things from getting out of control.

Around 11:30 p.m., a firetruck finally came to deal with the flaming SUV, which was blocked by a line of cops. Protesters began making their way from Farragut Square (where the lines of cops had eventually driven the crowd on I St) toward the Eisenhower Executive Office Building (EEOB) next to the White House. An organizer encouraged people to follow her and keep their energy up.

As I straggled behind the crowd, I heard a few young men talking about breaking into a jewelry store. "You want something from Tiffany's?" one said to another, laughing.

In front of the EEOB, the woman who had been leading the crowd yelled for "white allies to the front," and people came forward to form a line behind which the rest of the crowd gathered. Facing police, who stood behind a gate, the crowd chanted: "I can't breathe." 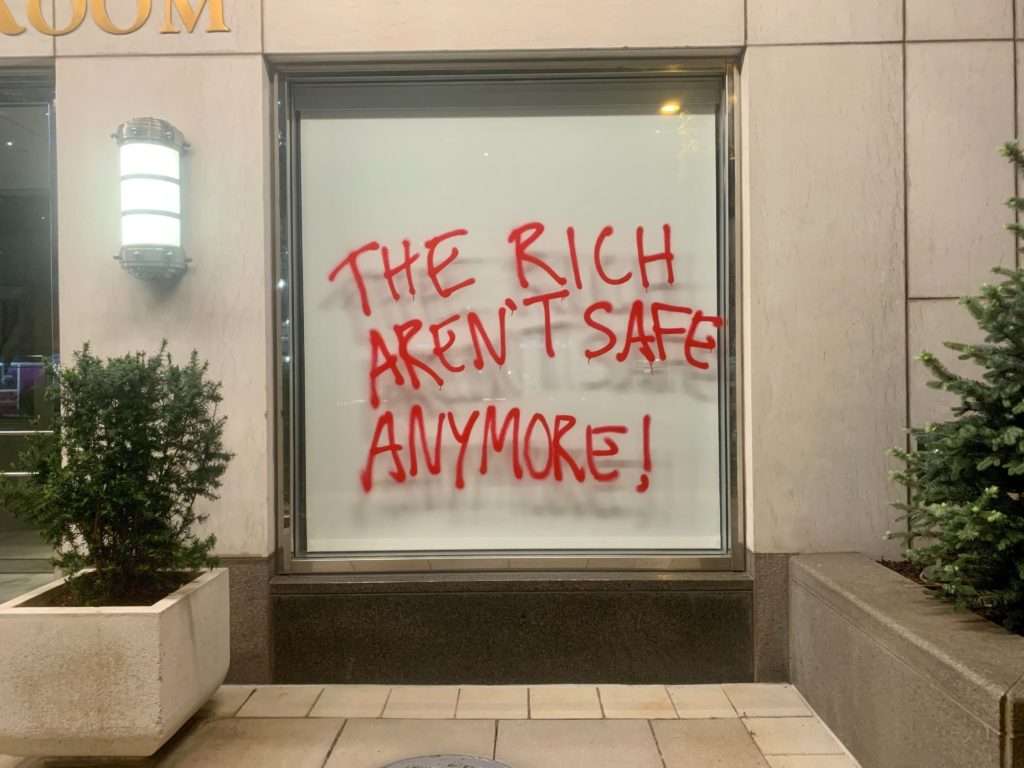 After a while, I walked back toward Farragut Square and watched a group of about six people smash in the windows of the building where Twitter's D.C. office is located. It isn't marked as Twitter, and it's unclear if those smashing windows knew it; the signs on the ground floor advertised The Oval Room. On the windows, protesters painted an anarchy symbol, "Fuck 12," and "The rich are no longer safe."

The window-smashing gang was occasionally cheered on by a few passersby. But those leading the crowds and chants encouraged people to stay away from them, and for the most part, people did.

And as more of the crowd started making its way back from the EEOB, the window-smashers began to move north. Up the street, I saw one young man standing alone with a bat across from Farragut Square, smashing in the front window and door of a Subway shop. Another man approached him, they went inside, and came out with a few bags of potato chips.

By this point, however, alarms were going off all over the place. A few small fires had been set (by whom I'm not sure; I did see protesters trying to put them out). And lines of police started boxing the crowd in again.

At one end, D.C. cops threw flash-bangs and deployed tear gas into the crowd. At the other end, they refused to let people fleeing the chaos actually leave. People kept running with nowhere to go, as the whole area filled with an eye-stinging smog of tear gas and smoke that made breathing through masks difficult. 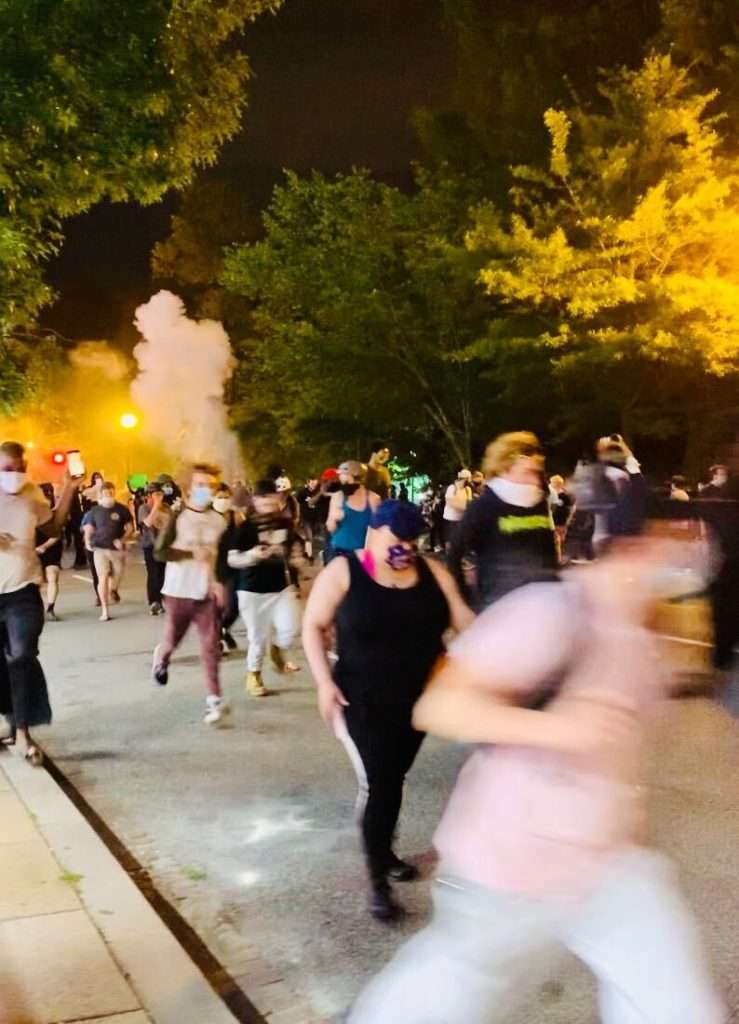 As two lines of cops marching from opposing sides got within about 10 feet of one another, they finally let protesters start escaping from the sides, then joined forces to start marching people further and further back.

By this point, around 12:30 a.m., the crowd near the White House was thinning out. Some protesters reportedly gathered and had a confrontation with cops by the Lincoln Memorial. 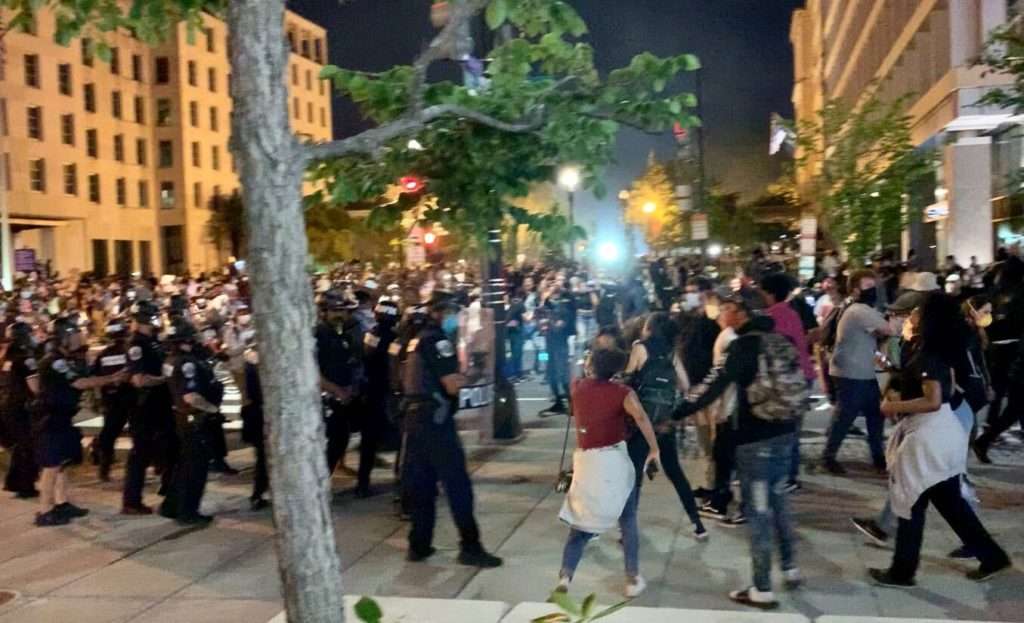 This was the second night in a row of protests in the D.C. area, joining protests across the country. D.C.'s police chief said Sunday that 17 people were arrested last night and one police officer had suffered a leg fracture.

D.C. Mayor Muriel Bowser said on Twitter that D.C. police "will always protect DC and all who are in it whether I agree with them (such as those exercising their First Amendment Right) or those I don't (namely, @realdonaldtrump)." Bowser added that she stands with "people peacefully exercising their First Amendment Right after the murder of #GeorgeFloyd & hundreds of years of institutional racism."