"All models are wrong, but some are useful" is an aphorism attributed to statistician George Box. It certainly applies to people's attempt to model the COVID-19 outbreak.

Fortunately, some of the more dire predictions of how the COVID-19 pandemic could play out—80 percent of Americans infected, with 2.2 million deaths over the next couple of years—have proven wrong so far. Now that it's been four months since the first COVID-19 cases in Wuhan, China, were described, what do current models foresee for the immediate course of pandemic for the United States?

You may recall that on March 31, the administration's coronavirus task force coordinator—Deborah Birx—cited unspecified modeling results that suggested that between 100,000 and 240,000 Americans could die of the disease in the coming months.

On March 26, the University of Washington's Institute for Health Metrics and Evaluation (IHME) reported its model's initial projections. Assuming that social distancing and lockdowns basically remained in force until May, the IHME's central estimate was around 81,000 Americans (with a 95 percent chance that the number of deaths would range between 38,000 to 162,000) would die over the following four months.

As an example of the perils of epidemiological forecasting, consider the projections a Rutgers statistician published on April 25 in the journal Reliability and Statistical Learning and Its Applications. Based April 14 model calculations, the statistician predicted that "the maximum total number of deaths will be approximately 62,100 across the United States due to the Covid-19 virus."

A team led by Dan Nicolau, a mathematician and physician at the Queensland University of Technology (QUT), has developed a model that bases its predictions on how cases, recoveries, and deaths of COVID-19 rise and fall in various countries. Through parsing such data, they claim to have identified a relationship between confirmed cases and recovered patients that predicts when the epidemic will peak and how many deaths will result from the disease in individual countries.

Basically, when the difference between the number of cases and number of recovered patients peaks, their model expects the number of deaths in each country to peak about 25 days later. The team's "broad predictions for the number of fatalities" are "generally somewhat lower than most other models." Their data and projections are available at COVIDwave.org.

These researchers suggest that when the ratio of the number of new to recovered cases reaches 2 to 5—the green band in chart below—the first pandemic wave has passed: 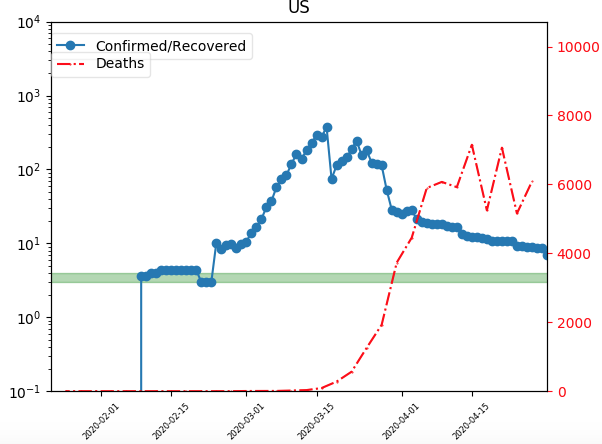 According to the QUT model, the U.S. is headed in the right direction but has not yet reached the resolution stage of the epidemic. In their April 14 preprint, the researchers estimated that the first wave of the epidemic would result in around 50,000 U.S. COVID-19 deaths and about 250,000 for the world. In April 24, they upped their number of projected U.S. first-wave deaths to 75,000.

The independent researcher Youyang Gu and his team have devised a COVID-19 epidemic prediction model by applying machine learning techniques to parse such data as how many people get the virus from each infected person, the length of the infectious period, and the time to recovery. This model's projections are considerably less optimistic than the ones we get from the IHME and QUT models. The central estimate is that total U.S. COVID-19 deaths will reach 170,000 (a range of 98,000 to 293,000) by the beginning of August.

Gu and his colleagues compare their model's projections with those made by the IHME model in early April for various states, including New York and Michigan: 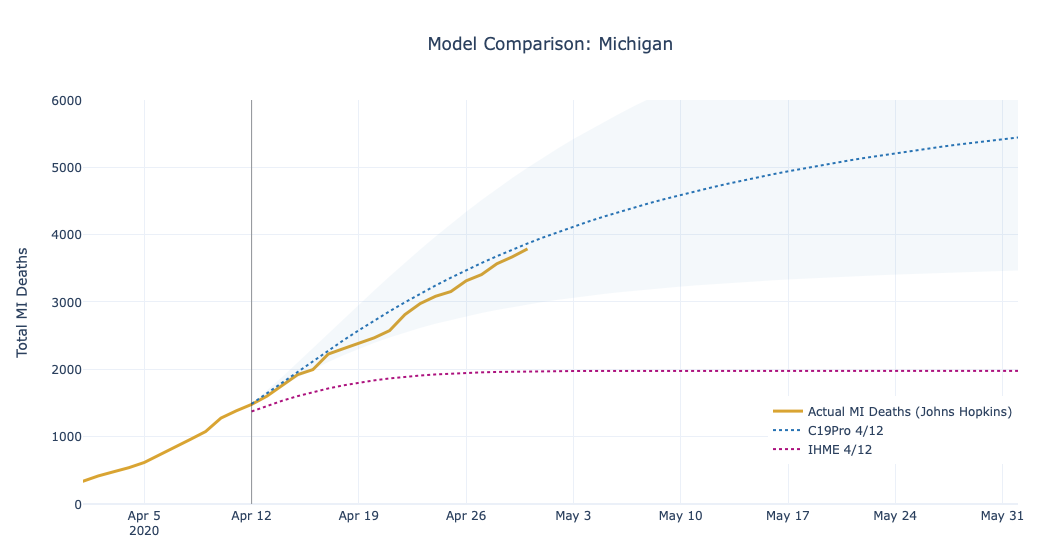 They also make some rather bold benchmark predictions for additional U.S. COVID-19 deaths per week in the coming month. 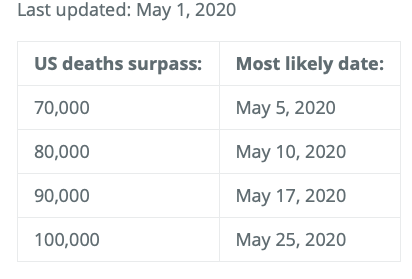 Interestingly, Gu and his colleagues also report that their model "determined that the true mortality rate for COVID-19 in most regions in the world is less than 1%. This is again consistent with what scientists have found, despite the fact that the official mortality rate is much higher (e.g. Italy is at 13-14%)."

These projections make significant assumptions about the effectiveness of various public health measures in determining the course of the epidemic. Change those policies, and their projections will necessarily diverge from the ones they provide now.

The upshot is that it would be comparatively good news if two weeks from now the daily U.S. COVID-19 death rate hews to the IHME's projections and is only about a fifth of the Gu model's central projection. By then, we will know a bit more about these models' usefulness.