Some 41 percent of Democratic voters are bothered by the fact that their party's nominee—former Vice President Joe Biden—is an elderly white male, according to a recent poll by the Pew Research Center.

Responses varied wildly across racial lines, but not in the way many people might expect. White respondents split evenly on the question: Half were bothered by Biden's whiteness and half were not. Black and Hispanic respondents, on the other hand, largely didn't care. Just 28 percent of the former and 30 percent of the latter indicated that Biden's age and ethnicity mattered to them.

The younger, more liberal, more highly educated, and whiter the respondent, the more likely they were to care about the candidate's identity. (Results were essentially indistinguishable along gender lines.) 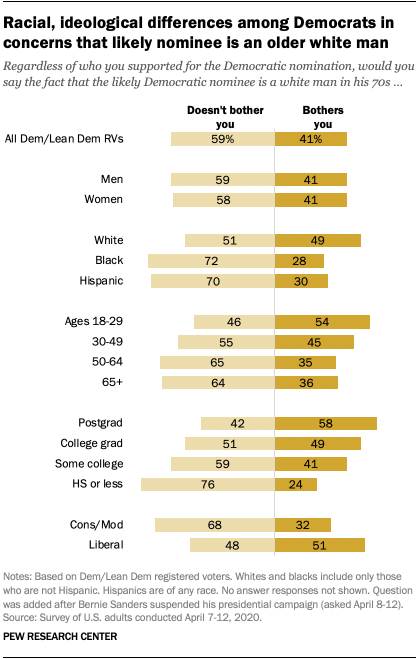 These results demonstrate a point that comes up frequently in my book, Panic Attack: Young Radicals in the Age of Trump. The progressive activist fixation on identity—race, gender, etc.—is not broadly popular, even among left-of-center Americans. The demonstrations of performative wokeness that are part and parcel of life on college campuses seem alien (and alienating) to just about everyone else. When progressives push the Democratic Party to be more consciously identitarian, they arguably make it more unpopular among a swath of gettable voters who are turned off by these kinds of appeals. But, most importantly, the voters who are expected to be enthused by the appeals to racial identity—people of color—don't care nearly as much as the undergrads at Middlebury, Oberlin, and Reed College.

This poll brings to mind a previous survey result from the Cato Institute, a libertarian think tank, which similarly found that a majority of minority respondents expected to take offense at various microaggressions weren't actually bothered by them.