Transpartisan disenchantment with Trump's coronavirus shtick. A majority of Americans now disapprove of the way President Donald Trump has been dealing with the COVID-19 outbreak, according to new polling. Not only that, but Trump 2016 voters are starting to turn against the president, too.

A CNN poll that came out Wednesday found overall disapproval for Trump's pandemic performance stands at 52 percent, up from 48 percent in early March, and 55 percent of Americans polled said Trump "could be doing more to fight the outbreak."

But the number of people who approve of Trump's overall handling of COVID-19 also increased, from 41 to 45 percent. (This was made possible by the number of poll respondents with no opinion on this question shrinking from 11 to 3 percent).

And Americans increasingly think the federal government overall is handling the crisis poorly. In the CNN poll, the percentage of respondents who said it's doing a poor job jumped from 43 percent in early March, to 47 percent in late March, to 55 percent last week.

Most of those polled were still bracing for the worst:

There's also evidence that more of the president's supporters are losing faith that Trump has had things under control. Navigator, which has been conducting every-weekday polling on COVID-19, finds that people who voted for Trump in 2016 have become increasingly less sure about how he's handled the outbreak: 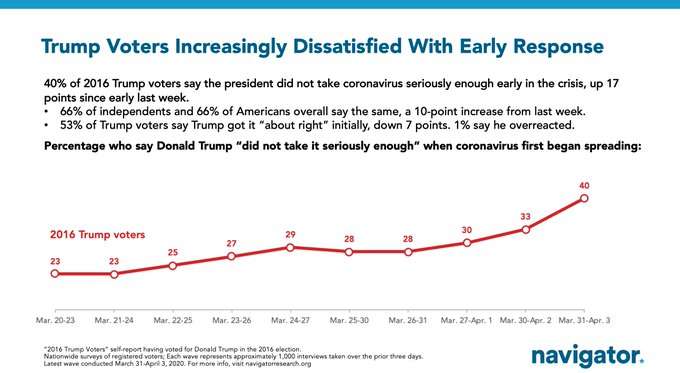 In Navigator polling data from March 31-April 3, 2020, some 40 percent of respondents who voted for Trump in 2016 said the president didn't take COVID-19 seriously enough in its early days; this was up from 23 percent the week prior. Sixty-six percent of independents said the same, up 10 points. Meanwhile, the number of Trump 2016 voters who say he got the response "about right" decreased from 60 percent to 53 percent.

Joe Biden it is, folks. Sen. Bernie Sanders (I–Vt.) officially dropped out of the Democratic presidential race on Wednesday.

Today I am suspending my campaign. But while the campaign ends, the struggle for justice continues on. https://t.co/MYc7kt2b16

BREAKING: @sdACLU + @JFSSD submit a complaint to @DHSOIG on behalf of a Guatemalan woman apprehended by #Border Patrol while in labor *and forced to give birth in custody while standing up.* Full complaint here: https://t.co/piGnb4U5mt (A THREAD)

Terrible news from Singapore: second wave is picking up steam. 142 new cases today and reimposition of full lockdown--cannot even have one friend over for coffee in your home without risking big fine. https://t.co/2Cs5rkM7az h/t @Worldometers pic.twitter.com/Y2fr0UgPyX