For a self-styled digital native who stresses "21st century solutions" to today's problems, presidential hopeful Andrew Yang has a decidedly 20th century way of addressing what he considers to be problems: spend more, regulate more.

As Reason's Billy Binion noted, the tech entrepreneur's proposals about "Regulating Technology Firms in the 21st Century" involve a lot of unwise monkeying around with "Section 230 of the Communications Decency Act; the landmark legislation protects social media companies from facing certain liabilities for third-party content posted by users online." Like many other critics of online platforms (including progressives such as Elizabeth Warren and conservatives such as Josh Hawley), Yang buys into the nonexistent distinction between "publishers" and "platforms" as a means of regulating the speech and economic freedom of social media companies and website operators.

In the same document, Yang also proposes to

It's this sort of "new" thinking that loses libertarians. In what way does a new, presumably cabinet-level, agency do anything other than expand the size, scope, and spending of government in a way that will inevitably limit speech and expression? That it's being done in the name of "the children" makes it seem like a punchline from a mid-1990s episode of The Simpsons. Yang asserts that "we are beginning to understand exactly how much of an adverse effect" social media is having on kids and that Facebook, Twitter, and the rest face no "real accountability" even as he rhapsodizes about his 20th century childhood: "I look back at my childhood and I remember riding a bike around the neighborhood, but now tablets, computers, and mobile devices have shifted the attention of youth."

Spare me the nostalgia and moral panic, which is highly reminiscent of the '90s panic over the supposed effects on kids of sex and violence on cable TV (lest we forget, Attorney General Janet Reno and other leaders threatened censorship if the menace of Beavis and Butt-head and other basic cable fare wasn't cleaned up). The social science is far from settled on any of this stuff and the first reaction to perceived problems should never be creating a series of government controls. Social media companies face all sorts of pushback in the marketplace, too, including lack of interest from users (Facebook has posted two years of declining use in the U.S.).

What would any of Yang's plans cost in terms of dollars and cents? It doesn't really matter because the visionary will pay for everything with a value-added tax on digital advertising.

Lord knows Republicans, including Donald Trump, are hardly avatars of a new way of governing, but the Democratic presidential candidates have yet to meet a problem that can't be solved by creating a whole new program or bureaucracy. South Bend Mayor Pete Buttigieg wants to shell out $1 trillion to make housing, child care, and college more affordable. Elizabeth Warren wants to raise taxes by $26 trillion and Bernie Sanders wants national rent-control laws while washout Beto O'Rourke yammered on about the right to live close to work before bidding adieu to the 2020 race. Joe Biden wants to spend $750 billion over the next decade to deliver what Obamacare was supposed to do.

Over the last 40 years, federal spending averaged 20.4 percent of GDP while federal revenue averaged just 17.4 percent. That gap, says the Congressional Budget Office (CBO) is only going to get wider, saddling future Americans with more and more debt, which dampens long-term economic growth, among other bad outcomes. 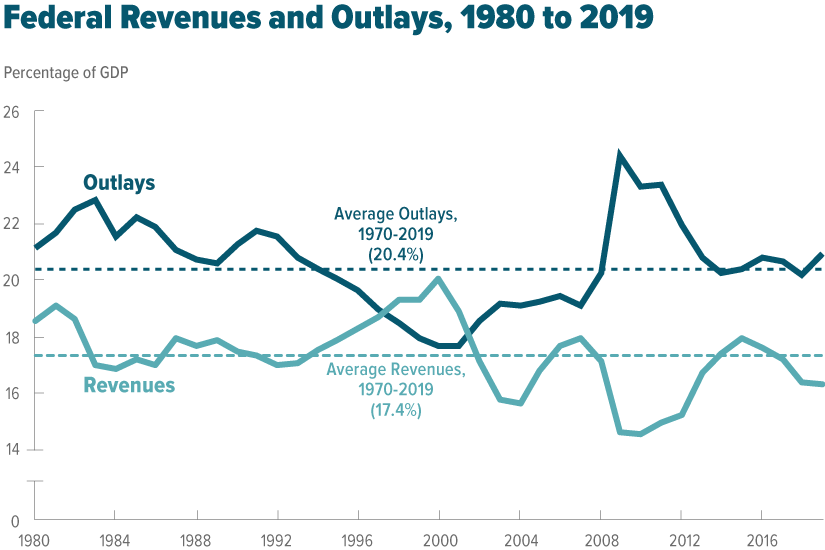 The federal government spent about $4.4 trillion in fiscal year 2019 (while posting a $1 trillion deficit). Surely there is more than enough savings to be found in that massive sum before proposing big new programs that will be layered on top of a seemingly infinite number of existing efforts to fix all the big and small problems of the world. It shouldn't be too much to insist that all candidates for president (and every other federal office) explain how they are going to bring revenues and outlays into some sort of balance. But at the very least, we shouldn't stand for yet more spending and regulation that simply gets layered on top of what is already there.