Everybody knows about those infamous speed traps where small-town law enforcement officers lurk in their vehicles, ready to pounce on anyone going even slightly over the legal limit and to fine the unlucky driver hundreds of dollars.

Many folks understand that the police often do this not to protect public safety but to empty people's wallets, but it's not easy to see how extensive these practices are and how dependent cities and towns have become on this money. So Data Editor Mike Maciag at Governing (a magazine sadly soon to be defunct) embarked on an extensive national analysis to determine which communities' budgets are overly dependent on fines.

He found that in nearly 600 jurisdictions across the country, fines are used to fund more than 10 percent of the general fund. In 284 of those cities and towns, revenues from fines account for more than 20 percent of the budget.

As the stereotype suggests, many of these places are rural towns in southern states such as Georgia, Texas, and Louisiana. But others are scattered across the country, and there are fairly high concentrations in New York, Ohio, and Illinois as well. 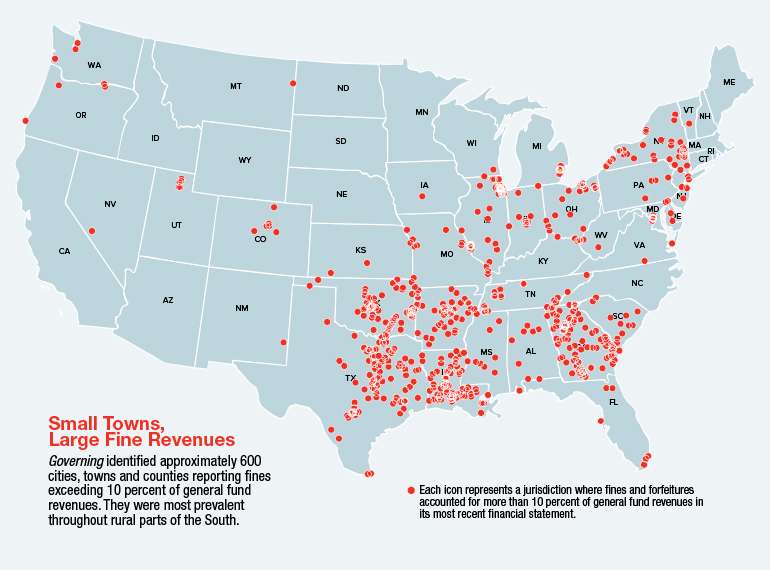 Some cities' tendency to try to fine their way to solvency got a lot of attention after Michael Brown's fatal shooting by police in Ferguson, Missouri. The anger there was driven not just by Brown's shooting, but also by an environment where the police were keeping their paychecks coming by constantly finding reasons to levy fines on its primarily low-income African-American residents—and then jailing people when they couldn't pay, which just further compounded the citizens' problems.

Ferguson wasn't the only town in St. Louis County with such issues. The Institute for Justice sued nearby Pagedale for a regime of petty citations so extensive that the local government had fined more than a third of its own citizens. The town literally handed out more code enforcement citations in a year than it had households. The town agreed in 2015 to reform its ways, but it still shows up on Governing's list. Still, things have improved there. Back when the Institute for Justice sued, it was getting a quarter of its revenue from fines. Now it's getting 11.2 percent.

The towns most dependent on fines are in Louisiana, the state with the second-highest incarceration rate in the United States. Places like Fenton and Georgetown—tiny villages with populations measured in the hundreds—get more than 90 percent of their revenue from fines. This happens because these towns are often poor and don't have an actual tax base to serve as a foundation for revenue. And so the police resort to speed traps and fines. In some locations, the goal is to hit travelers from outside of the community, but in other towns and cities, the citizens themselves are subjected to harsh punishments for small offenses.

But it's not all small towns. The largest city to appear on the list is Chicago, where fines and forfeitures account for 11 percent of the city's general fund—nearly $340 million. That shouldn't surprise anybody who has read Reason's coverage of Chicago's operations, particularly C.J. Ciaramella's reporting on the city's vehicle impound racket, which was followed by yet another lawsuit by the Institute for Justice.

While many local leaders insist that they're merely protecting public safety by preventing speeding and drunk driving, some of these towns actually include projected revenue from fines and forfeitures into future budgets, creating obvious incentives for police to levy fines and for courts to show no mercy. In Oklahoma, for example, the money from fines gets routed directly back into police and public safety funds. That's quite an incentive. And as Governing notes, there are consequences:

Some of the most problematic practices are found in small municipal courts with little state oversight. New York is home to approximately 1,300 town and village courts that, unlike the larger state-run city courts, keep most of their revenues from fines and fees. That means those judges have an incentive to show that their courts earn back the money spent on them, given that they're funded almost entirely by the locality, says Amelia Starr, chair of the Fund for Modern Courts, which promotes access to justice in New York state courts. "Almost any state that has courts that generate money for their locality in small towns is vulnerable to exactly these kinds of pressures," Starr says.

This arrangement carries serious ramifications for those facing charges. A Fund for Modern Courts survey of defense attorneys and public defenders reported that courts in 43 New York counties, or most of the state, "rarely" or "never" took a defendant's ability to pay into account before issuing a bench warrant.

Criminal justice reformers are now pushing reforms to reduce the use of fines and forfeitures as a revenue-generating tool. For more about the extent of the problem and how some towns are trying to make changes, read Governing's report here.